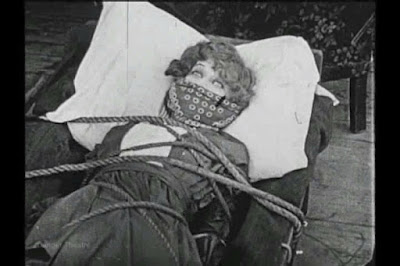 Arline Pretty is in a pretty pickle in 'A Woman in Grey' (1920). But at least she's following guidance on face masks.

This weekend I'm doing music for a special cinematic event at the Town Hall Theater in Wilton, N.H.: a screening of all 15 chapters of 'A Woman in Grey' (1920). It's a century-old dramatic serial adventure of which all episodes survive complete.

That means more than four hours of film! So we'll run the first eight chapters on Saturday, Oct. 3 at 2 p.m., and then the remaining episodes (including the thrilling conclusion!) on Sunday, Oct. 4 at 2 p.m.

I'm looking forward to the chance to immerse myself in this extended story as it plays out over such a long span of time. I have some main themes in mind, but other than that, the music will grow naturally from the story as it unfolds.

Also, I can't wait to try out this joke: "It's called 'The Woman in Grey,' but it's black-and-white film, so what choice did they have?"

Lots more detail in the press release below. Hope you can join us for some (or preferably ALL) of 'A Woman in Grey' on the occasion of its 100th anniversary. 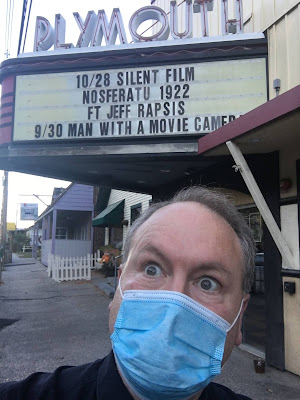 Me outside the Flying Monkey in Plymouth, N.H. prior to the show.

For now, let me report on last night's screening of 'Man With A Movie Camera' (1929) up at the Flying Monkey Moviehouse in Plymouth, N.H.

Before the show, I recounted to the audience my first experience of accompanying this film about 10 years ago. It was part of a monthly series in Manchester, N.H. that was heavy on traditional Hollywood dramas starring the likes of John Gilbert, Greta Garbo, and so on.

So we ran 'Man With A Movie Camera' without explanation. Afterwards, I asked for opinions.

"That was a terrible movie," said one woman, a regular attendee.

Wow! Turns out she was expecting, yes, a good story—exactly what filmmaker Dziga Vertov was aiming to avoid. He hoped to use film to show life as it really happens, rather than through some made-up narrative.

So I learned that for 'Man With A Movie Camera' to be understood, at least a brief explanation was in order. Silent film is unusual enough; for 'Man' to work, you need to prepare people for what Vertov was aiming for, at least as I understand it.

So I tell people: in essence, it's a celebration—of life in general, and of the potential of the motion picture camera to capture it.

I also think it helps to look at the film as a large-scale piece of music. Like a symphony, it contains movements of varying tempi, all grouped and structured in a way to create an overall effect.

One thing I've recently noticed is that often when the visual rhythm of the film is about to shift, Vertov inserts an image of a hand-operated traffic signal being changed.

For the music, I was thinking of Franz Schubert's 'Great' C Major Symphony, with its broad melodies filled with repeated notes, and also more recent minimalist music with a harmonic structure that unfolds slowly over a long time. 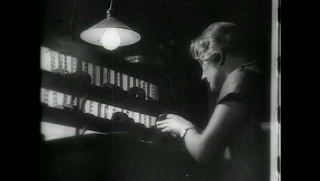 Yelizaveta Svilova edits 'Man With A Movie Camera' within the movie.

Overall, it worked. I caught all the big shifts, and kept things pretty bottled up until the final five minutes, in which a riot of fast-changing images explode on the screen.

What held it together was a steady pattern of three notes before the beat, and three notes after. (So with the accent on the fourth note.) Also, a simple line of four descending notes (down a half-step, and then a whole step and another whole step) was another key building block.

Those four notes could be harmonized in all manner of ways, but I found that reverting often to a simple triadic texture created a powerful "coming home" kind of feeling no matter how busy the texture.

I also kept using a non-traditional chord change that you hear a lot in contemporary tonal music such as in some scores of John Adams: going from a major chord (say Eb Major) to a minor chord up a half-step (E minor), in which all tones shift up except the third of the chord, which stays on the same note but which goes from major to minor because of context.

It's a very atmospheric move, I find, and has become part of my own toolkit and basic musical vocabulary. And it came in very useful with 'Man With A Movie Camera' because of how it creates a sense of very slight change while still moving forward. Sometimes I added other notes: the flatted 7th of the major chord becomes the leading tone of the minor, which adds richness.

Once all this was established, there were many places where the music seemed to fall into place with ease and really helped the visuals, I felt. I was especially pleased with music I came up with for scenes of women in a gymnasium using odd exercise machines from the period, including a mechanical horse.

It all really held together, and 'The End' brought cheers. (And for all the right reasons, I think.) For me, it was quite a workout, just like the ladies in the gym. Best of all, no one seemed to concur with the assessment 10 years ago.

Here's more info on 'A Woman in Grey.' See you this weekend for what promises to be yet another unusual cinematic experience! 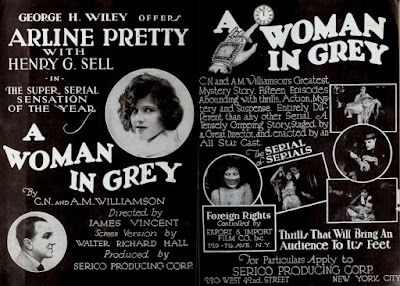 'A Woman in Grey' (1920), multi-part adventure thriller, to screen with live music over Saturday & Sunday Oct. 3-4

WILTON, N.H.—It's a cliff-hanger, but each time you won't have to wait long to find out what happens next.

It's 'A Woman in Grey,' a 15-episode adventure serial produced 100 years ago, when movies were a brand new form of entertainment.

The entire run of all 15 chapters will be screened over two days at the Town Hall Theatre, 40 Main St., Wilton, N.H.

Admission is free to each screening; a donation of $10 per person is suggested to help defray expenses.

"Seeing all episodes of this marvelous multi-part adventure over two days is a century-old form of binge-watching," Rapsis said.

"But it's also a great chance to experience early cinema the way it was intended to be shown: on a big screen, in a theater, with live music, and with an audience," Rapsis said.

Similar to the more famous 'Perils of Pauline' serial, 'A Woman in Grey' follows the story of a mysterious woman (Arline Pretty) who may hold the secret to finding a long-lost fortune in an abandoned mansion.

Like most multi-part serials, each chapter of 'A Woman in Grey' runs about 12 minutes, and was designed to be shown one episode each week at local theaters.

Most episodes ended with a "cliffhanger" predicament designed to keep audiences coming back to find out what happens next.

Most multi-part serials from the early days of film are completely lost, or exist only partially. 'A Woman in Grey' is unusual because it survives completely intact. The total length of all 15 episodes is nearly four hours.

'A Woman in Grey' is also unusual because it was produced not in Hollywood, but in Wilkes-Barre, Penn. by Serico Motion Pictures, Inc., a short-lived independent production firm.

The company recruited local stage performers, including leading actress Arline Pretty, to fill out the large cast of 'A Woman in Grey.'

All 15 chapters were shot on location in northeastern Pennsylvania, providing a rare glimpse of the region as it looked a century ago.

Serials continued through the 1920s and into the era of sound films, but over time came to be regarded as programming for children's matinees rather than a format for serious drama. The practice faded out after World War II and the development of television.

Admission is free; a donation of $10 per person is suggested. For more information, call (603) 654-3456 of visit www.wiltontownhalltheatre.com.