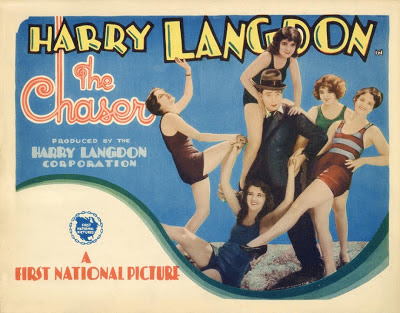 Some time ago, I discovered one way to drive a lot of traffic to a blog—mention "Jesus Christ" somewhere in the text. Boy, the hits just start piling up!

The occasion was a write-up of 'The Strong Man' (1926), in which I compared silent film comedian Harry Langdon to, yes, Mr. Christ. I even found two headshots that bore a resemblance.

Well, last night I accompanied another Langdon film, 'The Chaser' (1928), and comparisons to Christ are unlikely, other than to say that perhaps Harry's decision to direct himself was a form of self-crucifixion.

The film, screened at the Manchester (N.H.) City Library, drew some laughs, and the audience of about 40 passing strangers seemed to get Langdon's character, despite conventional wisdom that he's an acquired taste.

Afterwards, however, everyone sort of agreed that although 'The Chaser' was an interesting film, it wasn't about to prompt one of those transcendent silent film experiences that sometimes happen. (There I go with the religious stuff again!)

Comments ranged from "it shows how much he needed Frank Capra" to "that was an awful lot of poison he had in that kitchen." When they're wondering about the amount of poison in the cupboard, you know a film is in trouble.

And parts of the film simply don't make any sense at all, at least to modern eyes. Example: When Harry, dressed in his absurd lodge costume, proceeds to kiss women at a beach party, rendering them unconscious with desire.

Maybe there's something about the Langdon character and the now-absent 1920s zeitgeist that we really don't get after all these years. 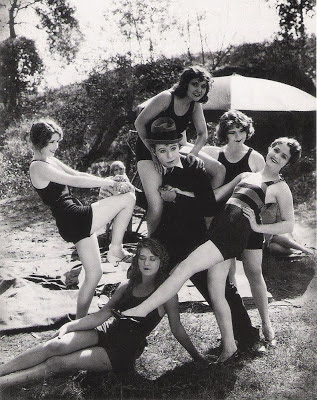 Harry seems to be enjoying 'The Chaser' more than our audience did.

I wanted to run this rarely screened film in part to see how an audience would react, but also to finally see for myself something that critic Walter Kerr pointed out so long ago in his genre-defining book 'The Silent Clowns.'

At one point in 'The Chaser' (the part with all the poison), Harry attempts suicide, but mistakenly doses himself with castor oil. He then lies down on the kitchen floor, and the camera lingers. And lingers. The joke, such as it is, is embodied in that single shot being sustained beyond all reasonability. And, seen in live performance, it really is, at least for a time. Against all odds, it starts to become funny.

But then Langdon CUTS to a close-in shot. Nothing has changed, but he just sabotaged the root and reason of the joke, according to Kerr. A surer hand—say that of his former collaborator Capra—would have not made that mistake.

Really? I wasn't really sure what Kerr meant, but the certainty with which he said it has stayed with me all these years since first reading 'The Silent Clowns' in the 1970s. It made me wonder: were there things about life that were so obvious to others that I couldn't see as well?

But now that I've seen 'The Chaser' with an audience, I know exactly what Kerr meant. The longer that sustained shot is held, the funnier it gets. But just as the hilarity is starting to build, the cut to the close-in shot short-circuits the audience reaction, setting things back to the starting place.

Finally, the film returns to the original shot for Harry's almost inevitable reaction: instead of dying, he suddenly must leap up and run to the bathroom. I can't imagine a less dignified (or funnier) way of being reminded that one is definitely still alive. But the joke is muted by the editing. What should have been a classic Langdon sequence instead becomes a mildly amusing fade-out.

You were right, Mr. Kerr!