This Mother's Day, give Mom...
a bare-chested Douglas Fairbanks!

One word for it is 'synchronicity.' Another might be 'overscheduling.'

Whatever term you use, three big films in four days is a lot. But then you can never have too much of good silent film, I think, and the three coming up (in three different states, no less) are real doozies. And I mean that in a good way.

Here's a quick roster, followed by the complete press release for the first one up: 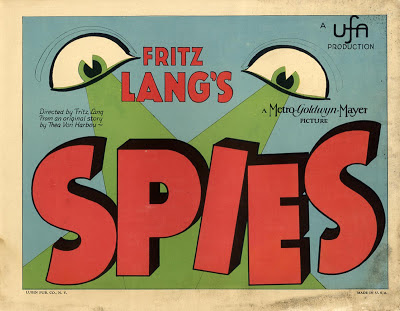 • Thursday, May 9, I'm doing music for a screening of Fritz Lang's 'Spies' (1928), the prototype of all espionage films. Showtime is 6:30 p.m. at the Flying Monkey Moviehouse and Performance Center in Plymouth, N.H. This is a terrific audience film and I'm really looking forward to scoring it live, as I think I finally understand all the various plot strands and how they intersect. Admission $10 per person.

• Saturday, May 11, it's music for 'Peter Pan' (1924), the original film adaptation of J.M. Barrie's immortal stage play. Showtime is 7 p.m. at the lovely Brandon Town Hall in Brandon, Vt. Free admission, but donations are accepted to help ongoing renovations. It's the opening night of this year's monthly silent film series at Brandon Town Hall, a great place to take in a vintage movie. Acoustics are splendid, and practically the whole town turns out! 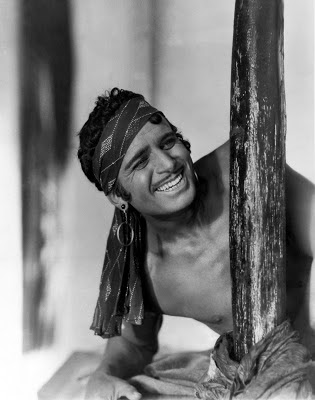 • Sunday, May 12, it's down to the big city to do music for a 1 p.m. matinee of 'The Thief of Bagdad' (1924), the epic fantasy starring Douglas Fairbanks, to be screened in 35mm at the Somerville Theatre, 55 Davis Square. (Somerville is part of Boston, Mass.) Very excited about this, as it's the first of another monthly silent film series, this one involving only 35mm prints. Best tag line of the year: "This Mother's Day, Treat Mom to Two and a Half Hours of a Barechested Douglas Fairbanks."

In the middle of all this, I'm working with students at Merrimack (N.H.) High School to create music for their stage production of 'The Hunchback of Notre Dame.' We'll do three performances next week, but rehearsals are nearing an end so I'm over there several more times this week and next.

And here's the full press release for tomorrow night's screening of 'Spies' (1928). If you've never seen this one in a theater, it's worth the drive up to Plymouth.

PLYMOUTH, N.H. — It was the movie that pioneered the espionage genre, complete with secret documents, hi-tech gadgets, an evil mastermind, and a beautiful but dangerous woman. It was 'Spies' (1928), an action-packed silent thiller, and will be shown with live music for one screening only on Thursday, May 9 at 6:30 p.m. at the Flying Monkey Moviehouse and Performance Center, 39 South Main St., Plymouth, N.H.

'Spies,' made by German director Fritz Lang at the end of the silent era, served as a blueprint for all espionage story-telling to come in movies and, later, on television. It is especially notable for the many ways it anticipated the James Bond films, in which a government's secret agent matches wits with a criminal mastermind.

Newly restored to its original length, 'Spies' has emerged as a flawlessly constructed spy thriller from the peak of the silent film era. Hugely influential, Lang's passion for meticulous detail combines with masterful storytelling and editing skills to form a relentless story of intrigue, espionage, and blackmail.

An international spy ring, headed by Haghi (Rudolf Klein-Rogge), uses technology, threats, and murder to obtain government secrets. As master spy and also president of a bank, Haghi leads a double life, using instruments of modern technology to spearhead a mad rush for secrets to assert his power over others.

Battling Haghi is the government's Agent 326 (Willy Fritsch), himself a master of disguise. Can Agent 326 stop Haghi's plot before it disrupts the world's balance of power?

Putting on the screen for the first time many elements of the modern spy thriller, 'Spies' remains remarkably fresh and captivating more than 80 years since its first release. Lang carefully reveals the elaborate methods of the spies as they move through his unknown city, no doubt creating a mirror of troubled Weimar Germany, where the film was shot.

Made by Lang's own production company and, like the classic films 'M' (1931) and Metropolis (1927), written by Lang with his wife Thea von Harbou, 'Spies' is "the granddaddy of decades of intrigue epics. In its rigorous austerity, it remains the most modern of the bunch," wrote Elliott Stein of The Village Voice.

'Spies' features many of the same performers featured in 'Metropolis,' Lang's famous futuristic fantasy, including Klein-Rogge, who portrayed the scientist 'Rotwang' in the earlier movie. 'Spies' also stars Austrian actress Gerda Maurus as the mysterious woman who could prove to be the undoing of Agent 326.

Live music for 'Spies' will be provided by silent film accompanist Jeff Rapsis, who uses a digital synthesizer to recreate the sound and texture of the full orchestra.

"'Spies' is a wonderful film for music," said Rapsis, who improvises accompaniment using themes or melodies he composes beforehand. "In addition to telling great stories, Lang's films are also visually interesting, and so they lend themselves to music to heighten the drama and tension," Rapsis said.

'Spies' is appropriate for family audiences, although it includes intense scenes that may frighten very small children. The film is two-and-a-half hours long.

The screening of 'Spies' is part of the Flying Monkey's monthly silent film series, which gives today's audiences a chance to experience the great films of Hollywood's early years as they were intended: in restored prints, in a theater on the big screen, and with live music and an audience.

Upcoming silent films at the Flying Monkey include:

• Thursday, June 13, 6:30 p.m.: "The Gaucho" (1927). The leader of a band of outlaws in Argentina must help save a religious shrine from being taken over and closed by a corrupt general. Audience favorite and change of pace for acclaimed swashbuckling superstar Douglas Fairbanks, who tries his hand playing a darker role than usual. Admission $10 per person.

The Flying Monkey runs silent film programs with live music each month. For more information about the music, visit www.jeffrapsis.com.