Back on the silent film circuit: 'College,' 'Steamboat Bill Jr.,' and a carousel dedication 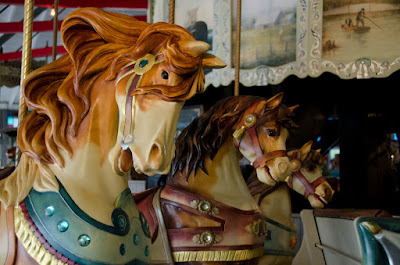 Close-up of the "Looff Carousel" at Slater Park in Pawtucket, R.I.

Labor Day weekend was a quiet time on the silent film calendar, but things heat up again this week.

On Wednesday night, it's off to 'College' via Buster Keaton's 1927 film of that title. The comedy starts at 6:30 p.m. at the Flying Monkey up in Plymouth, N.H. More details in the press release pasted in below.

And then down to Pawtucket, Rhode Island on Friday for an outdoor screening preceded by the re-dedication of a restored carousel.

The rededication is part of this year's Pawtucket Arts Fest. (And so am I!) Here's a little background:


Built by pioneer craftsman Charles I.D. Looff in 1894 the carousel was relocated to Slater Park in 1910. The carousel features a functioning North Tonawanda Military band organ, as well as 44 standing horses, 6 menagerie animals (1 camel, 3 dogs, 1 giraffe, 1 lion), and 2 chariots. The 125-year-old carousel was restored in 1978 and again in 2019. Please join Mayor Don Grebien and Parks and Rec. Director John Blais as we reopen this incredible historic carousel to the public.

This seems to be some kind of carousel. It even has its own Wikipedia entry!

And with apologies to all the great composers, there's nothing that compares to the sound of an authentic carousel.

Can't wait to hear it, and maybe take a ride or two before settling in at the keyboard for 'Steamboat.' (Hoping to claim the giraffe!)

The screening, a presentation by the Pawtucket Film Festival, starts at 7 p.m. and is free and open to the public. See you there!

And bring a jacket: early forecasts call for evening temps around 60 degrees. 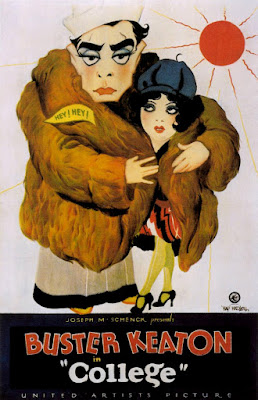 See for yourself with a graduation-time screening of 'College' (1927), one of Keaton's landmark feature films, on Wednesday, Sept. 11 at 6:30 p.m. at the Flying Monkey Moviehouse and Performance Center, 39 South Main St., Plymouth, N.H.

The program will feature live music for the movie by silent film accompanist Jeff Rapsis. Admission is $10 per person. Tickets are available online at www.flyingmonkeynh.com or at the door.

'College' follows the story of a hopeless university bookworm (Keaton) forced to become a star athlete to win the attention of his dream girl. Can Buster complete the transformation in time to woo her from his rival? And along the way, can he also rescue the campus from sports-related shame? 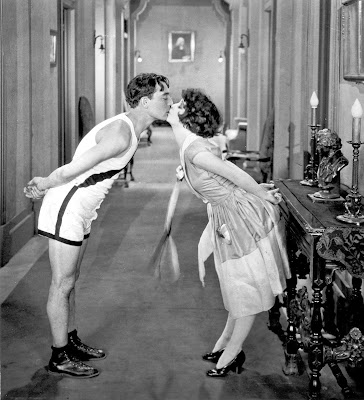 Keaton the bookworm-turned-athlete in 'College.' 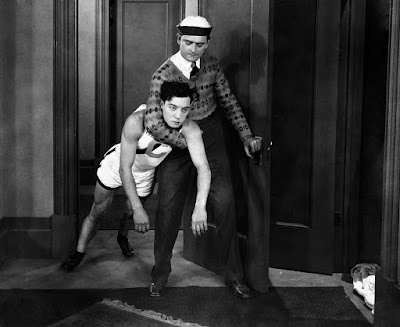 Keaton gets roughed up in 'College.'

In reviving Keaton's 'College,' the Flying Monkey aims to show silent film as it was meant to be seen—in restored prints, on a large screen, with live music, and with an audience.

Upcoming silent film programs at the Flying Monkey include:

• Wednesday, Oct. 16, 2019, 6:30 p.m.: 'The Hunchback of Notre Dame' (1923); Lon Chaney stars in the original screen adaptation of Victor Hugo's classic novel about a deformed bellringer in medieval Paris. A moving and timeless drama filled with classic scenes and capped with a thrilling climax!

• Thursday, Nov. 14, 2019, 6:30 p.m.: 'The Wind' (1928) starring Lillian Gish; a frail young woman from the east moves in with her cousin in the west, where she causes tension within the family and is slowly driven mad. Towering, intense performance by Lillian Gish in one of MGM's last major silent dramas.