Three sci-fi marathons in the next two months: Aelita; The Lost World; and Jekyll & Hyde 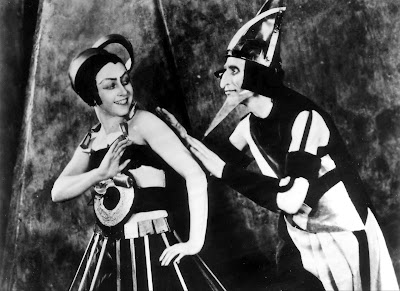 A scene from 'Aelita, Queen of Mars' (1924), which I'll be accompanying on Saturday morning at the Case Western Reserve University Film Society's annual Sci-Fi Marathon.

They say good things come in threes. And I'm fortunate to be doing silent film music at no less than three different sci-fi marathons in the next few weeks.

Silent film at a sci-fi marathon? Yes! And surprisingly, not one of them is 'Metropolis' (1927), Fritz Lang's famous pioneering epic of the genre.

For those of you keeping score, here's the line-up:

• And on Saturday, March 21, it's music for 'The Lost World' (1925) at the annual 24-Hour Ohio Science Fiction Marathon in Columbus, Ohio. Details: http://www.scifimarathon.com/

I first started playing silent films at sci-fi marathons in 2011, when the long-running Boston Sci-Fi Marathon screened a rare print of the original silent version of '20,000 Leagues Under the Sea.' I was asked to do live music.

The audience discovered a film so strange and old that it seemed new. And I discovered an audience unlike any other I'd played for: one that screamed and hooted and hollered and talked back at the screen and was generally having an all-out love affair with the whole experience.

Since then, I've functioned as the house accompanist for the Boston Sci-Fi Marathon. They don't show a silent every year. But when they do, it's always one of my favorite gigs of the year.

So I'm delighted to now be getting asked to appear at similar festivals, such as the two upcoming marathons in Ohio.

And it makes sense, I think. In an age of everything-instantly-available, the sci-fi marathon endures because it's a group experience that can't be reproduced in the home.

And within that framework, there's definitely a place for silent film with live music.

The next couple of months include other road bookings that'll bring me far from my home base:

• February finds me at the annual Kansas Silent Film Festival in Topeka, Kansas, where I'll score 'Soul of the Beast' (1923), 'The Student Prince in Old Heidelberg' (1926), as well as a passel of shorts. This year's event is Friday, Feb. 28 and Saturday, Feb. 29; it's my 21st consecutive year of attending.

• On Sunday, March 8, I'll travel out to Utica, N.Y., where I'm accompanying the recently restored 'Mothers of Men' (1917) as part of an exhibit on Women's Suffrage at the Munson-Williams-Proctor Arts Institute, a terrific small museum that boasts a solid art collection and innovative programming.

• And Sunday, March 22 finds me at the Cleveland Cinematheque, where I'll do music for Ernst Lubitsch’s 'The Marriage Circle' (1924) and 'Hands Up!' (1926) starring Raymond Griffith. Many thanks to long-time Cinematheque director John Ewing for continuing to include silent film with live music in the programming mix.

See you at the movies—or with all this road time, maybe on the N.Y. State Thruway!
Posted by Jeff Rapsis at 6:46 PM