Here's a piece that appeared in an edition of the Huntington News, the campus paper for Northeastern Univerisity in Boston, on Monday, Oct. 25.

This was the result of a single phone interview conducted by student journalist Hannah Rosman. She did an incredible job—I consider it one of the best pieces ever done about my work and bringing the silent film experience to life for contemporary audiences.

Bravo! You'll see her name again in the near future when that year's Pulitzer recipients are announced! 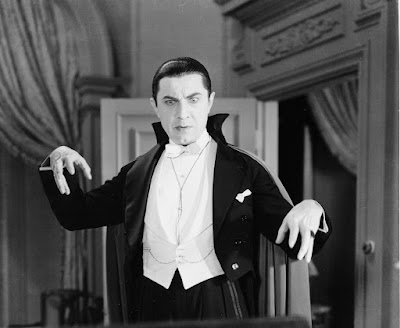 The original ‘Dracula’ (1931) starring Bela Lugosi will be shown in 35mm and with live music for one screening only on Halloween night, Sunday, Oct. 31 at 7:30 p.m. at the Somerville Theatre, 55 Davis Square, Somerville, Mass. Tickets $15 per person; discounts for students and seniors. For more info, call (617) 625-5700 or visit www.somervilletheatre.com.

To celebrate Halloween, the Somerville Theatre will be showing the 1931 horror classic “Dracula” for one night only at 7:30 p.m.

This one-night showing is even more special. Viewers will be treated to a performance from Jeff Rapsis, Somerville Theatre’s resident silent film accompanist and local composer, who will score the film live.

For Rapsis, it’s exciting to return to the theatre after being shuttered for so long. The 100-year-old theatre, located in Davis Square, recently reopened after a 17-month hiatus due to the pandemic.

“Something that gets lost nowadays is the value of seeing a movie, especially an old movie, in a theatre with an audience,” Rapsis said. “Older movies like ‘Dracula’ or all the silent films… don’t work very well when you watch them at home. But when you put them on the big screen and have an audience around and have music, that helps the film come to life.”

Rapsis doesn’t follow a particular guide when he scores films. Instead, his accompaniment is all improvised, a practice that has been passed down from film accompanists since the early days of film.

“I do my music right there in the theatre in the tradition of the great theatre organists. Back then, they would have a movie every other day, so they had no time to plan anything out, so [they] just developed the ability to kind of go with it and do the music in real-time. It’s kind of a lost art,” he said.

Rapsis takes this part of the job extremely seriously, making sure not to plan his accompaniment too much so as not to hinder his creativity in the moment.

“The thing is, I really don’t know what is going to come out until I get there,” Rapsis said. “The analogy that I think is the most fitting is that I’m like a painter making some sort of abstract art. I’ll start with one thing and just start adding on to it and just whatever happens will create the final experience.”

Although “Dracula” is a talking picture, it was released with virtually no musical score, a common practice during the transitional period from silent to sound pictures. Rapsis wants to maintain the integrity of the original film, so he will only add music in certain places where he feels it will either enhance the mood, heighten tension or signify a change in the emotional line of the story.

“I need to be aware of where the areas are that I can add music to without overwhelming the film or doing something that distracts from it,” Rapsis said. “The music that I do is to support the film, to make it connect with audiences. I’m not trying to create music that draws attention to itself and says, ‘Hey, listen to me, don’t pay attention to the movie.’ I’m trying to kind of go with the movie and help it connect to a modern audience.”

Despite its use of dialogue, “Dracula” is closely linked to the silent-era tradition of films shown with live music. Its director, Tod Browning was a prolific director of silent films, including many thrillers that predate “Dracula.”

“[‘Dracula’] still looks like what an old silent movie might’ve looked like. It still has that sort of atmosphere and look because [Browning] had been working on that for more than a decade,” Rapsis said. “That kind of creepy, Gothic appearance, full of shadows and spider webs. That was what he liked to work in, so [his] work lends itself to the whole live music thing because that’s kind of what he was doing all along.”

Since his childhood, Rapsis has been fascinated by old movies as a window into the past.

“I had a music teacher in seventh grade who was a movie collector… and this guy collected older movies and he’d bring them into study hall,” Rapsis said. “Most kids could not care less, but I was fascinated by it. I’d go to the library and read all about that era, which was long gone by then. I was just one of those kids.”

It wasn’t until about 15 years ago that Rapsis started making music for silent films, uniting two of his childhood passions.

“I always loved music and when I was a kid I took piano lessons… It was only much later in life when I began doing music again when I had a chance to do music for films,” Rapsis said. “It was like chocolate and peanut butter. They were these two things that I really liked and then I put them together and they were even better.”

Although Rapsis’s work is very specific, he manages to stay incredibly busy. He does about 100 shows a year, mostly in New England, but he occasionally travels farther.

“It’s this odd corner of showbiz I work in. These films used to be pop culture, but now they’re just kind of like a special niche that there’s some interest in,” Rapsis said. “In fact, there’s a growing interest in it. You’d think that over time people would be less likely to look at these [films], but actually, it’s growing because the films are so old now that they have a fascination all their own.”

Rapsis hopes that his work can contribute to the growing appreciation of the films he loves by recreating them as they were meant to be seen.

“People who may not think that older movies have much to offer …should give them a chance on a big screen in a theater with an audience because these films are almost like a different art form. They’re as different from today’s movies as sculpture is from painting,” Rapsis said.Tickets for “Dracula” are $15 online at www.somervilletheatre.com or at the box office. Discounts for seniors or students are available.

And here's a link to the piece online.