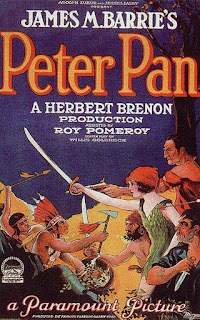 Hard to believe, but we'll soon be presenting our 4th annual screening of 'Peter Pan' (1924) on Thanksgiving weekend at the Wilton (N.H.) Town Hall Theatre. It's Sunday, Nov. 27 at 4:30 p.m. -- a perfect way to round out the long holiday weekend of eating and shopping with a vintage movie for kids of all ages. The screening is free, but donations are accepted...

...And once again, all proceeds of this screening will be turned over the Dana-Farber Cancer Institute in Boston, Mass. At the suggestion of Dave and Ali Stevenson, we've done this each year in the spirit of Peter Pan author J.M. Barrie, who wanted all royalties from his play to go to a London children's hospital.

Dana-Farber is the benificiary of the Jimmy Fund, well known in our corner of the world as a leader in the fight against cancer in children and adults. So please join us for a wonderful family afternoon at the movies, and I hope you contribute generously to help those who will not stop working to find a way to beat cancer.

Since we started this tradition in 2008, we've raised well over $1,000 for Dana-Farber, and I do hope we can push that amount much higher with this year's charity screening. Hope to see you and the whole family at 'Peter Pan!' If nothing else, the "audience participation" element of the film works best with a full house, so please do your part and be there!

And, as a bonus, to help everyone get into the holiday spirit, we'll also screen a selection of very odd early Christmas films, some more than a century old.
Posted by Jeff Rapsis at 7:46 PM No comments: 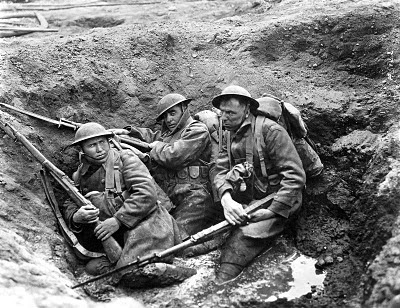 Here comes Veterans Day (Friday, Nov. 11 in the USA) and with it comes my annual attempt to honor those who've served in the armed forces by screening a silent film with live music. Hey, somebody's gotta keep the memory of World War I alive!

This year, it's a screening of 'The Big Parade' (1925) at the Flying Monkey Moviehouse and Performance Center in Plymouth, N.H. on Thursday, Nov. 10 at 6:30 p.m. I've done this picture several times and it's a great film for music.

For me, the big thing about this film is that it divides into two very different segments. The first, when the doughboys go to France, engage in various hijinks, fall in love, and so on, is essentially a romantic comedy. With music, it's very important to hold back throughout this section. Why? The payoff is when the troops are called up to the front, and the film throws its characters (and us along with them) right into the midst of deadly battle.

I think it comes across as terrifically effective if the music can then (and only then) take on a decidedly different character. The effect I'd like to achieve is that of waking from a dream and realizing you're in a situation that is real and something that you can'twake up from.

So please join us on Thursday, Nov. 10 for one of the great war films of all time, 'The Big Parade,' with live accompaniment by me. Here's the press release below...

P.S.: In the latest installment of "brush with greatness," the performer appearing next at the Flying Monkey after me is the great Leon Redbone, who's there on Saturday, Nov. 12. For more info, visit www.flyingmonkeynh.com!

Silent masterpiece 'The Big Parade' to be screened with live music on Thursday, Nov. 10

PLYMOUTH, N.H. — In honor of Veterans Day, the silent film classic 'The Big Parade' (1925) will be screened one time only on Thursday, Nov. 10 at the Flying Monkey Moviehouse and Performance Center in Plymouth, N.H. General admission is $10 per person. 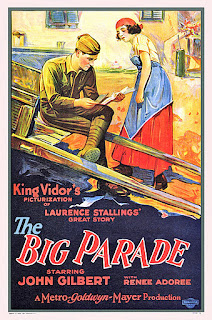 'The Big Parade,' a landmark war film, was chosen as a way for the Flying Monkey to salute all local servicemen and women on the occasion of Veterans Day on Friday, Nov. 11. The date of Veterans Day descends from the declaration of Armistice that ended World War I in 1918.

'The Big Parade,' a sprawling World War I epic and a box office sensation, made MGM into a powerhouse studio in Hollywood's golden years. The movie, released just a few years after World War I ended, was hailed by critics as the first Hollywood film to depict the harsh reality of combat and its impact of troops in the trenches and foxholes. Its hellish battle scenes were staged on a massive scale and still retain their ability to shock audiences.

In addition to vivid battle scenes, the film contains a famous dramatic sequence in which the French woman (Renée Adorée) realizes her love for the soldier, and tries to find him to say goodbye as the massive convoy of troops pulls out for the front. Another celebrated sequence depicts the light-hearted first meeting of the soldier and the girl, in which he teaches her how to chew gum.

Music for 'The Big Parade' will be provided by local composer Jeff Rapsis, who is preparing original material for the Flying Monkey screening. In improvising live movie scores, Rapsis tries to bridge the gap between modern audiences and silent film.

"Live music adds an element of energy to a silent film screening that's really something special," Rapsis said. " 'The Big Parade' clocks in at well over two hours, but it's filled with great scenes that lend themselves well to music. It's a real privilege to create a score to help this great picture come back to life," Rapsis said.

All movies in the Flying Monkey's silent film series were popular when first seen by audiences in the 1920s, but are rarely screened today in a way that allows them to be seen at their best. They were not made to be shown on television; to revive them, organizers aim to show the films at the Flying Monkey as they were intended—in top quality restored prints, on a large screen, with live music on a robust sound system, and before a live audience.

We screened Murnau's 'Faust' (1926) today at the Wilton (N.H.) Town Hall Theater the score fell together exceptionally well, I thought. So here are a few notes while it's still all fresh in my head.

First, something I didn't use: the Dies Irae, the traditional melody from the Catholic Death Mass. I had prepared an arrangement of it, and used it in a screening of 'Nosferatu' (1922) last month. And I was all set to make it one of the building blocks for Faust -- in fact, it was supposed to open the film. But in the end, I didn't use it, partly because it didn't seem to fit the other material I developed, and also because I didn't want to repeat myself.

Most of what I would have done with the Dies Irae, however, was accomplished with a simple melody in 3/4 time that wound up being very effective, I thought, as accompaniment for scenes in which Mephisto (played by Emil Jannings) makes mischief, and also for the film in general. I don't know what it was about this melody, but it was enough to carry quite a lot of the film.

One fairly basic device was to equate "good" with music in major keys, while evil was accompanied by music in "minor" keys. Nothing too daring about that, I know, but what was neat was that the 3/4 time melody starts in a minor key, then shifts to a major key in the middle, and then back to minor for the finish.

And many times, I found some emotional shift happening in a scene when the major part of the melody kicked in. So it often seemed like I was in synch with the rhythms that director F.W. Murnau baked into the film, which helps it all in terms of audience acceptance and effect.

The film is bracketed by similar scenes at the very beginning and end, so that helps provide a framework for the music. Not only does the film's conclusion merit some dramatic accompaniment, but the return to the opening setting (and shifting back to what we heard at the beginning, but transformed) also gives music a chance to reinforce the journey and the distance we've all come.

Probably the toughest scenes to score are those that make up the semi-comic sequence in which Mephisto interacts with Gretchen's aunt. After more than an hour of building up Mephisto as all-powerful, suddenly the film confronts him with the unwanted attentions of an older woman. What kind of music goes with that? And to make things worse, the film cuts back and forth to Faust and Gretchen, who are seriously in love. I ended up keeping Mephisto's 'devil music' in 3/4 time, but more bumptious, for his scenes with the Aunt, and then keeping the 3/4 beat going for Faust and Gretchen but laying over it some softer chords that sounded a bit more aspirational at first, then grew as the emotional temperature of the scenes rose.

Most of the score ended up being built out of elements taken from the 3/4 time melody. The only other material was a 6/8 march first heard at the beginning of the film during the village celebration, and later morphed into many different shapes for different purposes. I also had a "religious chord sequence" that I first developed for a screening of 'King of Kings' last year, and which came in handy here in many places, especially as material for the big ending.

Audience response was strong. Found out later than the screening was extra credit for an English class from a nearby high school, which explains the group of teenagers all sitting close to one another on one side of the theater.
Posted by Jeff Rapsis at 10:12 PM No comments: