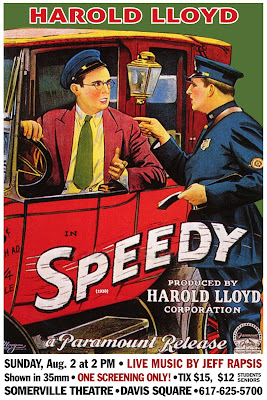 Phew! Just completed a four-day mini-marathon of silent film screenings that ended yesterday with a bang.

Or actually, many bangs, as there was plenty of gunfire in 'The Great K & A Train Robbery' (1926), a Tom Mix action adventure and the latest installment of this summer's "train melodrama" series at the Wilton (N.H.) Town Hall Theatre.

I don't know what it is about these railroad films, but they've been packing them in. We must have had 100 people at Sunday afternoon's screening—amazing considering it was an unusual date (we're usually the last Sunday of each month) and it was totally gorgeous mid-summer weather in these parts. 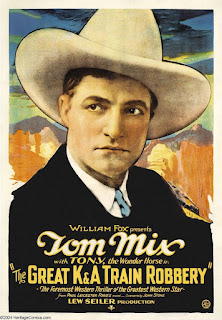 Even in the form of a somewhat blurry transfer (the best available), people were primed to cheer on Mix and Tony the Wonder Horse as they battled the evil gang bent on robbing the K & A.

It's not the longest film ever made (at 53 minutes, I'm thinking it must be descended from a Kodascope show-at-home print or something similar) but still holds the screen very effectively.

And it's a great film for music, too. I had some good basic train material, a fanfare/march for Tom and Tony, a love theme, and some "bad guys" music, all of which come together really well, I thought.

One reason attendance has been strong could be that I've reached out to non-silent-film people by posting info about the series on railfan messageboards.

And I have seen some new faces at these screenings, including a couple who came up to me after Sunday afternoon's screening to say how much they enjoyed it.

They'd never been before, but came because "we love trains," the woman said. And their unsolicited comment was music to my ears: "We forgot there was someone playing the music," she said. 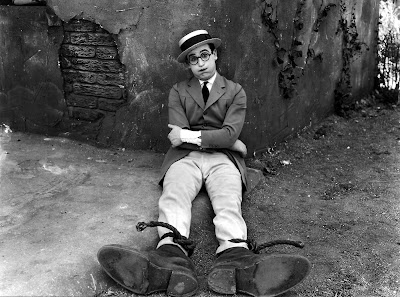 I hope I have an easier time abroad than Harold in 'Why Worry?'

Looking ahead: I'm traveling out of the country for the rest of the month, but will return in time for a double bill of Harold Lloyd features on Sunday, Aug. 2 at the Somerville Theatre.

More than most, I think, the Lloyd pictures are tooled to work with a large audience. Because we tend to get upwards of 150 people for comedy programs at the Somerville, I'm really looking forward to the Aug. 2 program.

It's a great chance to experience Lloyd's work as his original audiences did: in a theater, on the big screen, and surrounded by people all reacting together.

It makes a huge difference. Must be something about crowd psychology loosening up and intensifying our own reactions. Anyone doing a doctoral research program on this?

And I'm especially excited by 'Speedy' because I've just seen where silent film location detective John Bengston identified an appearance of Lou Gehrig in the scenes with Babe Ruth shot outside the original Yankee Stadium in the Bronx.

Bengston posted info about this a few years back, but I came across it only recently. Makes you wonder what else might be lurking in films that we think of as familiar.

More info is in the press release pasted in below. Hope to see you there! 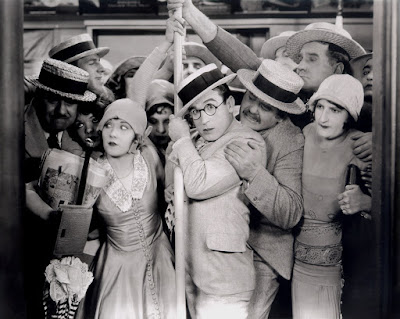 SOMERVILLE, Mass. — He was the bespectacled boy next door whose road to success was often paved with perilous detours.

Both films will be screened using archival 35mm prints on Sunday, Aug. 2 at 2 p.m. at the Somerville Theatre, 55 Davis Square, Somerville, Mass. General admission is $15; seniors/students $12.

Live music will be provided by accompanist Jeff Rapsis, a New England-based composer who specializes in creating music for silent film presentations.

The 35mm prints are on loan from the Harold Lloyd Trust of Los Angeles, Calif.

"The Harold Lloyd program continues our commitment to screening movies using real film whenever possible," said Ian Judge, the Somerville's general manager. "This format is how these pictures were designed to be shown, and as time goes by, finding good 35mm prints and a theater with the know-how to handle them is getting harder to do."

Lloyd's go-getter character proved immensely popular throughout the 1920s, with fans following him from one adventure to the next. Designed for a large audience, Lloyd's pictures—with their potent mix of comedy, sentiment, and thrills—are legendary for their ability to stir an audience in a theater even today. 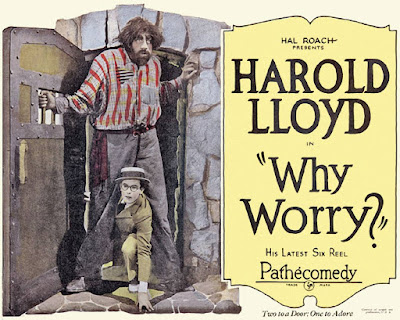 Lloyd and his 8-foot-tall co-star John Aasen in 'Why Worry?'

In the political satire 'Why Worry?', Harold plays a wealthy hypochondriac traveling abroad for his health who gets caught up in a local uprising. Thrown into prison, Harold is forced to use his wits to escape and rescue his nurse from the clutches of an evil Revolutionary.

'Speedy,' Lloyd's final silent feature before the transition to talkies, finds Harold as a baseball-crazed youth who must rescue the city's last horse-drawn streetcar from gangsters bent on running it out of business.

Filmed almost entirely on location in New York, 'Speedy' features remarkable glimpses of the city at the end of the 1920s, including footage of Coney Island and the original Yankee Stadium in the Bronx. 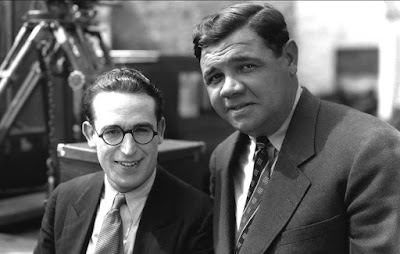 The latter scenes include an extended appearance by Babe Ruth, then at the height of his career during the team's storied 1927 season.

"In 'Speedy,' New York City is practically a part of the cast," Rapsis said. "In filming it on location, Lloyd knew scenes of New York would give the picture added interest to audiences across the nation and around the world. But what he didn't anticipate was that today, the location shots now provide a fascinating record of how life was lived in 1920s urban America."

Rapsis will improvise a musical score for both films as they're screened. In creating accompaniment for the Lloyd movies and other vintage classics, Rapsis tries to bridge the gap between silent film and modern audiences.

Other upcoming features in the Somerville's "Silents, Please" series include:

• Sunday, Sept. 13, 2 p.m.: 'The Matrimaniac' (1916) starring Douglas Fairbanks Sr. An unusual program that contrasts this early Fairbanks marital farce with another picture released by the same studio after Fairbanks had moved on, but which uses material from the Fairbanks film to support an entirely different story.

• Sunday, Nov. 22, 2 p.m.: 'The Four Horsemen of the Apocalypse' (1921) starring Rudolph Valentino. Sweeping drama of a divided family with members caught up on opposites sides during World War I. Breakthrough film for Rudolph Valentino, introducing the sultry tango and launching him to stardom.

Harold Lloyd's ‘Why Worry?’ and 'Speedy' will be shown in 35mm and with live music on Sunday, Aug. 2 at 2 p.m. at Somerville Theatre, 55 Davis Square, Somerville, Mass.