A Western double feature, plus: 'What would Lewis & Clark think of frequent flier points?' 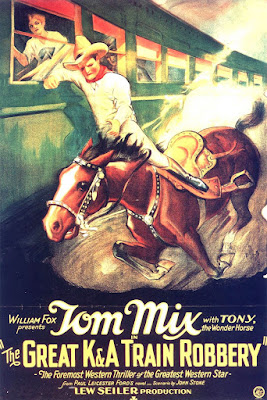 Yessiree Bob, I'm no rancher or gunfighter or cowpoke.

But there's something about sitting in a darkened theater and losing one's self in a silent western with live music.

What is that something? I can't describe it. And neither can Bob, whoever he is.

But you can experience it yourself tonight (Thursday, May 24) with a double feature at the Flying Monkey Moviehouse and Performance Center in Plymouth, N.H.

And you know, it's curious: I've never quite responded to Westerns as a genre. 'Treasure of the Sierra Madre,' anyone? No thanks—I'll take the Marx Brothers, thank you.

As a native of New Hampshire, I guess it's just not my thing, ayup.

To me, the West is Sullivan County and the Connecticut River Valley. (Which is where D.W. Griffith filmed Lillian Gish on the ice in 'Way Down East,' by the way.)

But I find I really get into silent Westerns. No matter the quality of the film, the story, or the performances, they're absorbing and entertaining and somehow it all works for me.

I've sensed this all along. But I've really come to know it by going out twice a year to do accompaniment at the Niles Essanay Silent Film Museum in the San Francisco area.

The museum schedules screenings in two-month blocks, and they always start out with a silent western feature: usually something I've never heard of.

And I always seem to be out there right at the opening of a new schedule, which means I'm usually in the saddle, so to speak, for Hoot Gibson or William S. Hart or more obscure performers.

Maybe it's because I've just flown across the country, having just gazed down at the desolate landscapes that formed the setting for so much Western lore.

By the way: how amazing that we can zip from coast to coast before lunchtime when it took early settlers months of hardship! I wonder what Lewis & Clark would make of frequent flier points.

But about Westerns: maybe seeing them in "silent film" form, where everything runs a little faster, is more in step with my own internal clock.

And perhaps the simplicity of many of the Western stories and the characters that inhabit them—maybe that's more suited to the silent film medium.

After all, there's something very primal about seeing people as characters who we know are good, and who will triumph, and characters who are irredeemably bad, and will get punished.

And often the punishment is physical and real, and meted out by the fists of the good and virtuous. What could be more satisfying?

But I think people crave this in a story, as it so rarely happens in life as slog through it. And silent westerns seem uniquely suited to deliver it in a way that I respond to.

And you? Join us tonight and find out!


* * *
And let me wish all a good Memorial Day weekend—one in which we take time to remember the many, many people who sacrificed their lives for a cause greater than themselves.
Posted by Jeff Rapsis at 11:51 AM