Silent film at Tanglewood: mixing high culture with low comedy, or 'Where are the birds?' 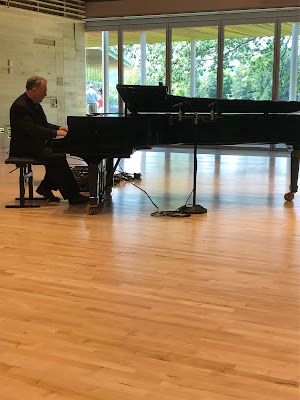 Me at the Steinway in the Linde Center. Wow, that piano is so long it won't fit into the picture! Photo courtesy Joan Gallos.

During the last weekend of August, I took my silent film music thing to a new place: Tanglewood.

No, not the mobile home park in Keene, N.H. We're talking Tanglewood, as in summer home of the Boston Symphony Orchestra.

Yes, this actually happened. Dressed in black, I got to play on a beautifully maintained Steinway concert grand piano as long as a limousine, and in a brand new performance venue opened earlier this summer.

And for a Buster Keaton film. In front of people! At Tanglewood!

Did I mention this was at Tanglewood?

As a silent film accompanist who often performs in church basements and middle school multi-purpose rooms, I'm still just a little gob-smacked that this took place.

But there I was, invited to be a part of the first-ever Film Weekend, a three-day program organized by the BSO's new Tanglewood Learning Institute.

And if this wasn't enough, I followed a Q & A with John Williams, whom you may recognize as only the world's foremost composer of film and symphonic music. Williams was on the grounds for Tanglewood's annual film music program that Saturday night, and so dropped in on the Film Music Weekend.

I'd like to report that John and I are now close friends, but really the most I can say is that Maestro Williams and I had adjacent dressing rooms. But then again, just having a dressing room was thrilling enough for me.

How did all this come about? I'm still not sure, but I'm grateful to the BSO's Eric Valliere and Tanglewood Learning Institute director Sue Elliott for the opportunity to play a part in this new initiative. Thank you!

And I have to say, it would have been nerve-wracking if I had been expected to do anything other than what I've done more than 1,000 times (literally) in the past decade: create live music for a silent film screening in front of an audience. 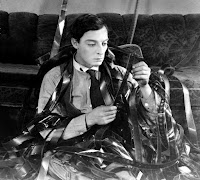 The film? Keaton's 'Sherlock Jr.' (1924), chosen because it's a crowd-pleaser. and also because it's short—just 45 minutes long. I had only 90 minutes, and this left time for an introduction, plus discussion afterwards.

It all went well, I'm pleased to relate. But interestingly, it was highlighted by things I hadn't planned for at all.

I had intended to start the presentation, titled 'Music, Motion, and Emotion,' by asking for a volunteer, like in a magician's act.

"Anyone at all! Step right up!"

I would then ask the person to simply walk across the space, back and forth, while I played different kinds of music: happy, sad, agitated, strip-tease, etc.

The goal, of course, was to show how different types of music can affect the perception of what is seen, even if it's the same thing seen again and again, with only the music changing.

But earlier that morning, upon entering the brand new Linde Center's Studio E for load-in, I first saw the facility's enormous glass wall that offers expansive views of the manicured Tanglewood campus.

And yes, people were walking around outside. And I realized then that I wouldn't need to ask for volunteers! People were already strolling by right outside, ready-made for accompaniment. 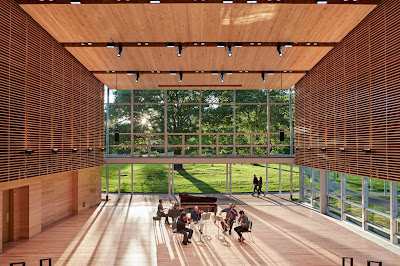 So that's how I started: by sitting down at the Steinway and creating music to accompany unsuspecting Tanglewood visitors who happened to wander into view.

"Look at that guy in the blue shirt," I said, launching into some minor key sad music. "He's just broken up with his girlfriend because she didn't like his cello playing. Oh, the humanity!" Or something like that.

I felt like Steve Allen on the old Tonight Show, where he'd spice up a "man in the street" segment by commenting on hapless passersby, sometimes to piano accompaniment, if I recall correctly.

To my delight, there seemed to be a ready appetite for such shtick. Nice! I was glad we could start with some pre-movie laughs, although Buster was the star of the day.

Later, I found that the glass wall has engendered some controversy. It was intended to create a more open environment and to link performances with the iconic campus—a kind of indoor/outdoor thing.

But now that the Linde Center is in use, some people feel the spectacular scene is distracting and detracts from the focus on performers in the hall.

By creating "music for passersby," I apparently demonstrated an important quality of the glass wall, even as I was mining it for comedy.

Afterwards, Sue Elliott told me that Mrs. Linde (from the donor family) was in the audience, and it helped reinforce the belief in the facility's design.

The Keaton film, which I accompanied on my digital synthesizer rather than the Steinway, produced a solid and sustained reaction. The Q & A that followed was lively and challenging, and probably could have continued for a lot longer.

And in another unplanned moment, I found myself relating a personal Tanglewood story that I'd been waiting more than 40 years for the right opportunity to tell, but didn't realize this until I was standing there in the Linde Center with a microphone.

When I was discovering classic music around age 12, one Sunday afternoon my mother tuned the radio to Boston station WCRB-FM, which was broadcasting a concert live from a place called Tanglewood.

And I listened to long-time patrician announcer William Pierce intone that the first work on the program would be George Gershwin's 'Concerto in F.' (In telling the story, I imitated Pierce's distinctive voice, probably not the first time that's been done at Tanglewood.)

Then came the music, and I remember being delighted to hear that every time the music got quiet or paused, you could hear birds chirping!

"Wow!" I thought. "Gershwin's Concerto in F has bird sounds!" I actually imagined a percussionist blowing into one of those bird call whistles to create the various tweeting sounds called for in the score.

So for a long time, I thought Gershwin's Concerto in F included bird-chirp accompaniment.

Then one day in high school, I borrowed a recording the work from the library and brought it home.

The music started, and I was completely disappointed.

"Where are the bird sounds?" I wondered. "I've been cheated!"

Where are the birds? They were at Tanglewood. And now so was I!
Posted by Jeff Rapsis at 3:10 PM