A thrilling start at the Rex Theatre; bringing Monty Banks to Vermont on Saturday, 7/17 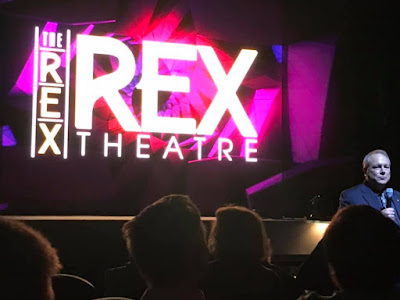 Pre-show remarks at the inaugural silent film program at the Rex Theatre. I look like I'm hosting a beauty pageant. Photo by Tom Murphy.

Last night's inaugural silent film program at the newly renovated Rex Theatre in downtown Manchester was quite the thing.

The restored theater prove to be a marvelous venue for silent film with live music. And our first outing attracted an audience of well over a hundred people! 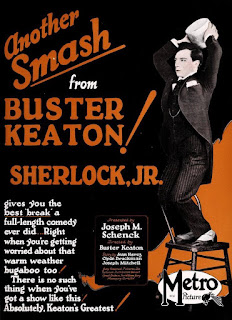 I've done 'Sherlock' dozens of times, and I've never heard such a vocal response to the film's first 10 minutes. And that was nothing compared to the reaction when Buster attempts to "follow his man closely."

For this, I undercut my "Buster detective theme" with a descending bass, played as lightly but as crisply as possible. The result: serious-sounding music that I think worked really well with Buster's comedy.

Most gratifying moment: when Buster casually catches the cigarette that Ward Crane tosses over his shoulder, taking a puff and discarding it, all while never breaking stride, people actually shrieked with delight.

Thanks to everyone at the Rex Theatre for finding a place for silent film with live music on the venue's calendar. We have three more shows scheduled through next year, and if the success of our initial outing is any indication, we're in for a heckuva ride!

Next up: we journey up to Brandon, Vt., where Saturday night brings a "Planes and Trains and Monty Banks" program. Looking forward to the opportunity to uncork some rarely screened vintage comedy in one of my favorite silent film venues.

More details in the press release below. If you're in the area, please join us. And if you're not in the area, there's still time to take the train or the plane, in keeping with the spirit of the program. 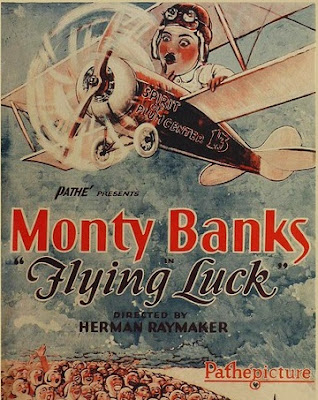 'Planes and Trains and Monty Banks' at Brandon Town Hall on Saturday, July 17

BRANDON, Vt. — His real name was "Mario Bianchi," but on screen he was "Monty Banks."

But both names are now forgotten, and so are most of the films he starred in during the golden age of silent film comedy.

Rediscover the unique comic style of Monty Banks with a screening of two of his surviving films on Saturday, July 17 at 7 p.m. at Brandon Town Hall, 1 Conant Square, Route 7, Brandon, Vt.

On the bill: an excerpt from 'Play Safe' (1927) featuring a hair-raising rescue aboard an out-of-control train; and the feature film 'Flying Luck' (1927), an aviation comedy inspired by Lindbergh's successful solo flight across the Atlantic earlier that year.

Both films will be screened with live music by Jeff Rapsis, a New Hampshire-based silent film accompanist.

Banks has faded into obscurity in part because most of his starring films are lost or unavailable.

The two films being shown at Brandon Town Hall are among the best surviving examples of his work. 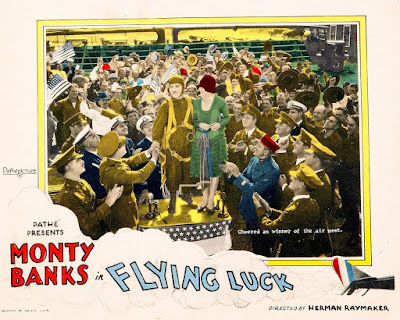 In featured attraction 'Flying Luck,' (1927), hapless aviator Monty is so inspired by Lindbergh's solo Atlantic flight that he joins the U.S. Army Air Corps, where it's one comical disaster after another.

The feature will be preceded by an excerpt from 'Play Safe' (1927), which includes a hair-raising chase sequence set aboard an out-of-control freight train barreling through the California countryside.

"Monty Banks was once a popular star, but that was a long time ago," said Rapsis, who will create live improvised musical accompaniment for both pictures.

"So it's a real treat to screen these films and rediscover a gifted performer and visual comedian with a style uniquely his own."

Emigrating from Italy to the U.S. in 1914, Banks first appeared on stage in musical comedy and cabaret. By 1917 he was working as a dancer in New York's Dominguez Cafe.

After this he turned to films, acting and doing stunt work at Keystone, Universal and other studios.

Banks appeared in many short comedies until the mid-1920s, when he formed his own production company to make feature films.

In the late 1920s, he moved to England; after the transition to talkies, he stopped acting in films and instead concentrated on directing.

Later in life, Banks donated money to build several children's hospitals in his native Italy, which are still operational.

• Saturday, Nov. 13, 7 p.m.: 'College' (1927) starring Buster Keaton. Head back to school with Buster, a bumbling freshman who discovers sports is the only sure-fire route to popularity; sponsored by Lucy and Dick Rouse, Edward Loedding and Dorothy Leysath, Sam and Sharon Glaser, Peter and Louise Kelley, Bar Harbor Bank and Trust.

For more information and the latest updates on Covid-19 safety protocols at the Town Hall, visit www.brandontownhall.com.