Here's the text of a piece by Boston Globe film writer Ty Burr that ran in the Boston Globe on Sunday, June 9 at 2013. 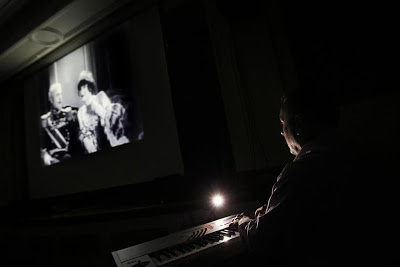 ‘I joke to my wife that I’ve found my official niche: I get to collaborate with dead people.”

Jeff Rapsis is kidding, but he’s onto something. When the 1921 Charlie Chaplin classic, “The Kid,” unspools at the Somerville Theatre next Sunday afternoon — a Father’s Day special and the latest installment in the Somerville’s ongoing silent film retrospective — the 49-year-old New Hampshire native will be at the piano once more, communing with the spirits of Chaplin, Jackie Coogan, and other artists of nearly a century ago.

Rapsis is one of a hardy breed of musicians who provide accompaniment to classic silent movies — comedies, dramas, westerns, horror films — when they’re shown in libraries, art-house theaters, and other institutions. They’re being shown more and more often. In fact, the digital revolution and an increasing commitment to film preservation has led to a recent boom in silent film, with restored versions appearing in new prints and on DVD and an avalanche of titles finding their way to disc and streaming media.

At the same time, 21st-century audiences are discovering that silents are much more than the crude flickers of popular myth. They can be eerie (the 1925 “Phantom of the Opera”), epic (1925’s “Ben-Hur”), exciting (any of Douglas Fairbanks’s swashbuckling adventure films), shockingly decadent (Eric von Stroheim’s 1924 “Foolish Wives”), profoundly moving (F. W. Murnau’s 1927 “Sunrise”), or just really, really funny (Chaplin, Buster Keaton, and Harold Lloyd are the acknowledged go-to guys).

Rapsis has played along to them all, and in so doing has cast a spell around audiences that connects the visions of yesteryear to the experiences and emotions of today. He has held down a regular spot for years at the beloved Town Hall Theatre, in Wilton, N.H., whose monthly screenings of silent films draw fans from all over New England. Like an itinerant troubadour, he crisscrosses the Granite State and beyond on a weekly basis. He goes where the movies are, and now they’re coming to the Boston area: The Somerville has committed to monthly silent screenings that allow Rapsis to strut his stuff. Says the theater’s manager, Ian Judge, “The great thing about Jeff is his enthusiasm and knowledge. There are plenty of musicians that could interpret a silent film, but Jeff has the deepest appreciation of the actual film, where it sits in film history, and how it’s projected. He also speaks to the audience and gives an intro that’s better than anything on Turner Classics. He’s definitely more than the average bear.”

Perhaps the most remarkable aspect of all this is that Rapsis is relatively new to the game. The past two decades have seen a miniature surge in creative silent-movie musical accompaniment, with groups that run the gamut from the experimental Cambridge-based Alloy Orchestra to the traditionalist Mont Alto Orchestra, which works out of Colorado. Rapsis himself is representative of a growing number of solo practitioners who simply love the experience of improvising music to images moving on a wall.

That’s right — Rapsis improvises much of what he plays. “I go to a theater with at least three or four things in mind that I can use,” he says. “I don’t bring any sheet music, but I keep a notebook of ideas. I just try to stretch myself. It’s sort of a point of honor to try to come up with fresh stuff for a film that I’m doing for the first time. I look at it once, and maybe sit at a keyboard and improvise a little bit, and when it’s time to show it at the theater, it all comes together quite naturally.”

Rapsis traces his love of silent film to his middle-school years in Nashua, where a teacher who collected classic slapstick comedies would screen them during study hall. “I developed an interest in the genre at a very early age back in the 1970s,” he says, “and it always stayed with me, like a low-grade infection.” He studied classical piano but exasperated his teachers with his tendency to ignore the score. “I could never sit down and play the Mozart sonatina the way I was supposed to, because I would always want to try something different. Maybe it’s a manifestation of attention-deficit disorder, I don’t know. But it turned out to be exactly what I do with music for silent film screenings: It never comes out the same way twice.”

After studying English at Fordham University, in New York, Rapsis returned to New Hampshire and the life of a newspaper editor; he’s now the co-owner of the Manchester-based alternative weekly The Hippo. “By day I’m associate publisher of HippoPress, by night I become Silent Film Man,” he jokes. “Not everybody’s favorite superhero, but it’s what I do.”

It’s doubtful whether his day job engenders quite as much passion. Get Rapsis started on the subject of silent-movie accompaniment, and he’s soon discoursing on mysteries. “It takes about 10 minutes for this to happen, but I get into this place I call the Accompaniment Zone, where I respond to the film in a way that’s almost like a meditative state. I’m responding to the movie almost like an audience member would be, but I have a keyboard in front of me and I’m able to create music that reflects that emotional response.

At the same time,” Rapsis continues, “there’s this other level that’s not so subconscious, where I’m aware of the audience and what the moment is in the context of the whole film. There’s part of me that’s calculating in real time: I don’t want to come on too strong too soon in a scene if I know there’s going to be stuff more powerful later on and I’ll have nowhere to go.

Rapsis tries to steer clear of the rinky-tink clichés of silent-era piano music, and for very specific reasons. “All of us have grown up listening to movie music our whole lives, and we have certain expectations of what a movie score might sound like. That involves everyone from Bernard Herrmann to John Williams to Danny Elfman. I try to acknowledge that. I create music that you probably wouldn’t have heard in the 1920s but is more like a modern movie score, and I think that helps bridge the gap between a film that’s two, three, four generations old and what people expect when they go to a movie today, especially if they’re new to silent film.”

Most of all, Jeff Rapsis wants you to come to the Somerville to experience a silent movie as it should be experienced. “I can’t stress it enough,” he says. “These films were designed to be shown in a certain environment: on a big screen, with an audience, with live music. If you watch them at home alone on the entertainment center with your dog, you’re not doing them justice. It’s like going to see the ‘Mona Lisa’ in a closet.”

A big part of the thrill for Rapsis is “putting Humpty Dumpty back together: You get the film on the screen the way it’s supposed to look, in a big theater with an audience — and they come to life in ways that surprise even me after all these years of doing it. This is why people first fell in love with the movies.”