Here's the text (and some pictures) of a story that ran on Thursday, March 6, 2015 in the Concord (N.H.) Monitor, a daily paper based in our state's capital. 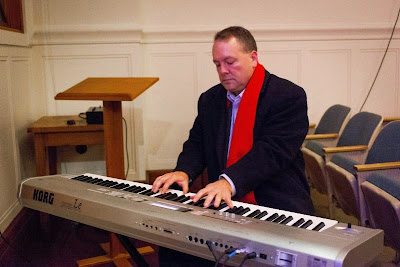 Warming up in the Manchester Library. Literally—it was chilly enough for me to keep my coat on. Photos by Elizabeth Frantz.

Adding sound to a silent world

That’s because Rapsis, a silent film composer from Bedford, doesn’t work off a score; he makes up his compositions as he plays.

“What I do is mostly improv,” Rapsis said. “I somehow have the ability to do that.”

He said he enjoys watching the film along with the audience and paying attention to their emotions and reactions and not be buried in sheet music. He said it is a bit like being a comedian or jazz musician in that you have to adapt to the audience.

If he plays a melody he likes, he’ll sometimes jot it down for future use. He said he goes in with the movie’s plot in his head and three or four ideas of what to play, but he’ll gauge the music as it happens.

“Sometimes, I find myself doing something I’ve never done before,” Rapsis said.

That was the case four years ago, when he composed a stern, minor key sequence to accompany a film called Cambria. Last weekend, Rapsis accompanied The Little Church around the Corner at the Kansas Silent Film Festival and reused the sequence for the first time since composing it.

Rapsis will accompany Tarzan and the Golden Lion at 6:30 p.m. next Thursday at the Flying Monkey Moviehouse and Performance Center. He has accompanied this film twice last year in July and September. Tickets are $10.

People are drawn to the Tarzan film because of its familiar name, but the silent film isn’t what many think of, he said.

Rapsis said one of the most iconic things people remember of Tarzan is his yell, which they won’t get to hear at the silent film. If they really want, he said audience members are welcome to add their own yell.

The early Tarzan feature was considered lost until recently when a single copy was found in England. The film tells the story of Tarzan who journeys through the jungle to the legendary City of Diamonds, where he and his lion Jadbal-ja save an Englishwoman from being sacrificed to the gods.

Writer of the Tarzan books, Edgar Rice Burroughs, was involved with the film’s creation. After filming, James Pierce, who played Tarzan, married Burroughs’s daughter Joan. The couple voiced Tarzan and Jane on the subsequent radio series. 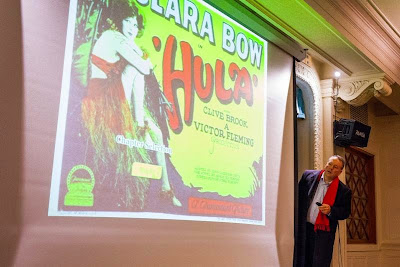 Checking the image prior to a screening of 'Hula' (1927) at the Manchester City Library.

Occasionally, Rapsis will prepare by watching the film in advance, but that is not always possible, either because he doesn’t have time or the film is rare and not widely available.

On Tuesday, he accompanied Hula, a romantic comedy directed by Victor Flemming (of Wizard of Oz and Gone with the Wind fame) in Manchester. The day before performing, he said he probably wouldn’t get to watch the film before accompanying it.

Rapsis first became interested in silent films while attending junior high in Nashua. In study hall, his music teacher would play old films from his collection. Rapsis was also a piano student and interested in music.

Later in life, in 2005, he was asked by New Hampshire director Bill Millios to compose the soundtrack for Dangerous Crosswinds. Though not a silent film, Rapsis discovered how film and music could be combined. It was a bit like “chocolate and peanut butter” – a perfect combination, he said

He uses a digital synthesizer (a fancy name for a big keyboard) to accompany silent films because it can mimic instruments from an entire orchestra. He has everything from percussion to strings at the tips of his fingers. The synthesizer can also play more unusual sounds, like space sound effects, but he avoids using them, preferring to stay with the more traditional orchestral melodies.

Some of the movies run for three hours or longer, but Rapsis said he doesn’t get tired of playing and prefers not to have intermissions.

“It’s better to have a film run all at once,” he said. 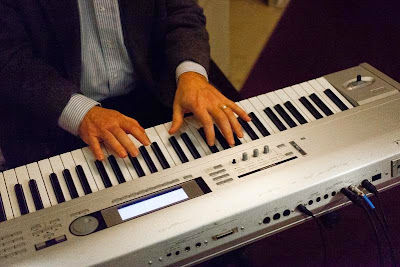 No heavy lifting, except when carrying the keyboard to and from gigs.

Despite the long periods of playing, he said he is often surprised at how quickly the time passes.

“It’s not hard labor,” Rapsis said. “My mind gets a good workout.”

On rare occasions, he can run out of ideas, but he said he just pauses for a moment and resets. Then, he keeps on going.

Rapsis will discuss “Music, Film and Creativity” at the New Hampshire Institute of Arts’s French Hall on Wednesday, hosted by the New Hampshire Creative Club from 6 to 9 p.m. He will examine the connection between the moving image and music and teach attendees the creative process necessary in composing original music for film.

He said his talk will focus on the role music plays in storytelling.

The New Hampshire Creative Club is a group of professional graphic designers, photographers, illustrators, web developers, videographers, printers, teachers and writers. Rapsis, who by day is co-owner of the Hippo and a professor at the University of New Hampshire, said he hopes to show how creativity can be inspired from different areas.

If you have never watched a silent film before, he suggests giving them a chance, but preferably not at home.

Rapsis said silent films are a different art form than motion pictures today. He agreed with Alfred Hitchcock, who once said “silent pictures are the pure motion picture form.”

“It’s like opera, in that it’s about really intense emotion,” he said.

He explained there is a misconception that silent films have over-acting. While that might have been true in some of the early films, he said the style matured quickly and that there is an elegance and subtlety on how actors conveyed emotions without dialogue.

“There was an ability to tell stories with acting that was second to none,” Rapsis said.

Silent films can feel a little silly if you watch them alone, at home, Rapsis said. The films were intended for the big screen with a live audience and live music.

He said to seek out a live screening, even if it isn’t his.

Even if the silent film isn’t a classic, they can be fun in ways people don’t realize, Rapsis said. Silent films were what first caused people to fall in love with cinema.

The films are extremely entertaining, he said, and meant to hold people’s attention for a long period of time.

And there is the added enjoyment of being able to see daily life from more than 100 years ago.

Rapsis regularly accompanies films at the Somerville Theater and Harvard Film Archive in Massachusetts and the Wilton Town Hall Theatre in New Hampshire. He keeps a blog on silent films and his upcoming shows at silentfilmlivemusic.blogspot.com.