Pirates! (...but not in the Caribbean) 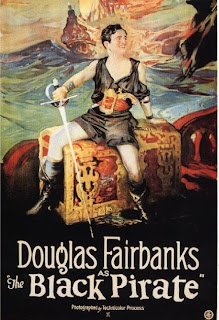 The holiday season is here, and of course that brings with it...pirates! Arrrgh the 'Erald Angels Sing, right?

Well, I suppose actually 'Robin Hood' is the Douglas Fairbanks film most appropriate for the season of giving, as at least some actual giving takes place (from the rich to the poor), as opposed to 'The Black Pirate,' in which the pirates give their victims nothing but gunpowder-powered blasts into eternity.

But anyway, we're screening 'The Black Pirate' in Plymouth, N.H. on Thursday, Dec. 9. Come one, come all. And I'm looking forward to audience reaction to the lesser-known 'Mystery of the Leaping Fish' (1915), with its shockingly casual images of gleeful cocaine use. How times have changed!

Here's all the details in the latest press release... 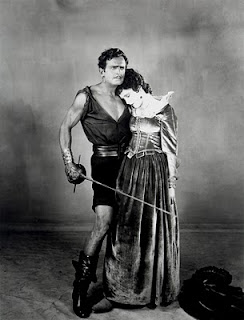 PLYMOUTH, N.H.—He was the Indiana Jones of his day, thrilling early filmgoers with amazing stunts and feats of heroic derring-do. He was Douglas Fairbanks Sr., one of Hollywood’s first megastars, and his timeless charisma can be seen again in a double feature of two of his best pictures on Thursday, Dec. 9 at the Flying Monkey Moviehouse and Performing Arts Center in Plymouth, N.H..

Featured is ‘The Black Pirate’ (1926), a swashbuckling tale of the high seas that proved one of Fairbanks’ most popular blockbusters. The forerunner of all pirate movies, it was also one of the first Hollywood films to be released in color. Also on the program is ‘The Mystery of the Leaping Fish’ (1915), an early Fairbanks spoof of the Sherlock Holmes tales.

The double feature starts at 7 p.m. Admission is free; contributions are encouraged. The films will be accompanied by live music by local composer Jeff Rapsis. Dinner is also available for patrons who arrive early at the Flying Monkey, 39 South Main St., Plymouth, N.H. For more information, call (603) 536-2551 or visit www.flyingmonkeynh.com.

When the silent film era ended in 1929, an aging Fairbanks found he was less enthusiastic about the effort required to make movies and retired from the screen. He died in 1939 at age 56 after suffering a heart attack; his now-famous lasts words were, “I’ve never felt better.”

The Fairbanks double feature is the latest in a series of monthly silent film screenings at the newly renovated Flying Monkey Moviehouse and Performing Arts Center. The series aims to recreate the lost magic of early cinema by bringing together the elements needed for silent film to be seen at its best: superior films in best available prints; projection on the big screen; live musical accompaniment; and a live audience.

“These films are still exciting experiences if you show them as they were designed to be screened,” said Rapsis, accompanist for the screenings. “There’s a reason people first fell in love with the movies, and we hope to recreate that spirit. At their best, silent films were communal experience very different from today’s movies—one in which the presence of a large audience intensifies everyone’s reactions.”

‘The Black Pirate’ and ‘The Mystery of the Leaping Fish’ will be shown on Thursday, Dec. 9 at 7 p.m. at the Flying Monkey Moviehouse and Performing Arts Center, 39 Main St., Plymouth, N.H. Free admission; contributions encouraged. For more info, call (603) 536-2551 or visit www.flyingmonkeynh.com.
Posted by Jeff Rapsis at 8:51 AM