Okay, silent film screenings are a bit like going to the casino because you never know what's going to happen. On Sunday, Nov. 28, when we screened the original 'Peter Pan' (1924) in Wilton, N.H., we experienced adventures equal to anything depicted onscreen. 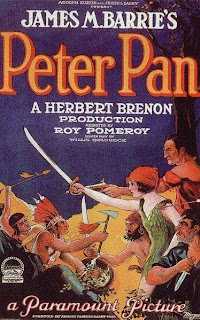 First, the good news: In the spirit of author J.M. Barrie donating all 'Peter Pan' royalties to a London children's hospital, we once again donated all proceeds of our screening to a similar charity—in our case, the Dana-Farber Cancer Institute down in Boston, Mass. We've done this each year for the past three years at the behest of Dave and Ali Stevenson, who help organize the screenings. This year, thanks in part to a pre-show raffle organized by Dave (and featuring prizes from his 'Looser Than Loose' vault), we were able to raise $356 for the cause.

Now the bad news: We almost didn't show the film! What happened was on Sunday, my wife and I pulled in after driving 17 hours straight from Chicago. This made me addle-brained enough to not be as organized as I usually try to be, which in turn led to a scene about an hour before showtime in which I simply could not find the film.

After about 15 minutes of panicked searching, I found a copy of it and rushed off to the theater, which is a half-hour drive away. Getting there, I found the 2 p.m. showing of 'The Girl Who Kicked Over the Hornet's Nest' hadn't ended yet (hey, it pays the bills), so our audience was cooling its heels. This led to little time to set up and do our raffle; in the meantime, Dave Stevenson showed up with another disc with Peter Pan on it, which we chose to use.

Well, unfortunately, about a half-hour into the film, the disc began having troubles—image break-up, then slowdown and stop issues. It cleared up for a bit, but then came back with a vengeance, causing the film to skip around and ahead alarmingly. Finally, when it seemed jammed for good, I had to stop playing and rushed back to the projection booth with the version I had. We resumed, and thankfully the disc played without problems, but the all-important spell had been broken and musically, it's tough to recover the zone after something like that.

Still, people liked it, and all was well, until afterwards, when all the money collected for the raffle (kept in a popcorn bucket at my feet) was missing, as was my cell phone. A search proved fruitless; I was just about to give up when both the money and the phone were discovered in one of the theater's trash barrels! Talk about your last-minute cliff-hanging race-to-the-rescue finishes! Anyway, the day was saved, but not after a certain amount of suspense...

And what was really nice is that for some reason, we had a larger-than-usual group (it seemed to me) of first-timers who came up to me afterwards and said how much they enjoyed the experience. Hope they keep coming back. But thanks to all who attended, and especially to those who helped the Dana-Farber Cancer Institute, and also to Dave Stevenson for organizing the effort and for Wilton Town Hall Theatre manager Dennis Markaverich for his support of the silent film series.
Posted by Jeff Rapsis at 8:34 AM