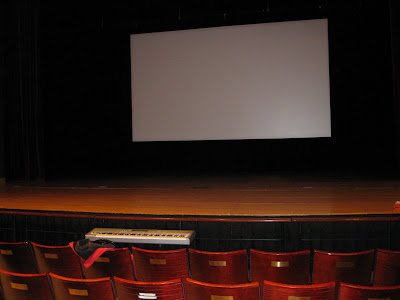 Last night I had the pleasure of heading down to the campus of Merrimack College in North Andover, Mass., home of the Rogers Center for the Arts, where they screened Keaton's 'The General' to a small but appreciative audience in the main theater. It's a nice facility with a big screen, comfy chairs, and enough room for a keyboard right down front. (The picture was taken after everyone left, just to give you an idea of what the set-up was.)

What a nice surprise to discover a silent film series in such a nice facility! Peter Waldron, the college's Director of Arts Programming, was on hand to welcome me, as was author Christopher DiGrazia, creator of a series of mystery tales set in the silent film era, who served as the evening's guest speaker. 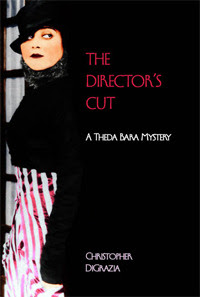 Christopher has since e-mailed me a link to his Web site, www.kissmemyfool.com, which I encourage you to check out. I look forward to getting familiar with his work! Here's a copy of his book, 'The Director's Cut,' with a link to the Amazon.com sales page. Good luck with the book, Christopher!

'The General,' with its mix of period-authentic drama, constant motion, and uniquely Keaton comedy, is a tough film to score effectively. On the one hand, music can give shape and pace to the film's narrative. But at the same time, too much can step on the moments that Keaton goes for laughs. Add to that the constant intercutting between Keaton and his union nemesises (is that a word?), and also the "love story" aspect threaded throughout the film, and you've got a real musical challenge.

I've done this film several times, and the key seems to be to resist the temptation to do too much too soon, which is a very tough thing for me to do. :) I think what helped a bit was that right after the opening titles, I switched from full orchestra to a chamber string ensemble, and kept it there until the union spies make off with Keaton's train. I then switched back to strings during Buster's rainy night behind union lines, and then back to orchestra when he took back his locomotive.

But still, if you're going to be effective with the music, this is a film you can't wing. There's just too much happening too quickly, and a lot of it demands music that varies widely in character. If you can stay ahead of things, the effort is worth it because music can add a lot to the story's forward motion. But if you're not in synch with Keaton's fast-paced cross-cutting, things can quickly get muddled.

Alas, I only learned of this screening the day before, which didn't provide much opportunity to remind myself of the trajectory of Buster's story. Even so, I was moderately pleased with how the music went.

Simple traditional melodies served as useful "leitmotifs" for the two sides: the opening phrase of 'Dixie' for the Confederacy, and 'Yankee Doodle' (often played in a minor key) for the Union. I had a new "love" melody, based on a sharped fourth, which proved quite handy to bring out the subtext, especially when Marion Mack is in the engine cab.

And I had a versatile (and long) original main melody with a couple of break-out-able cells that helped stitch together scenes. So it held together, and there were a few moments that came out really well, I thought—especially near the end, when the soft music I was doing to go with Buster and Marion Mack keeps halting as they get repeatedly interrupted by soldiers marching past the newly minted lieutenant.

Thanks to Peter and Christopher for letting me come down and do my stuff, and for a great audience that had some very kind things to say after the performance. Hope to return there next season and do music for more silent film screenings!
Posted by Jeff Rapsis at 1:42 PM