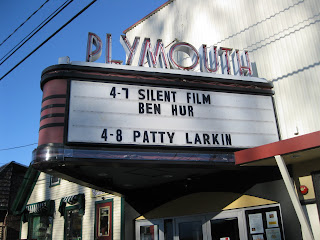 Wow! We did 'Ben Hur' last night and I'm still in recovery! It's a great film with a lot of potential for music, and it was very satisfying to help bring it to life for the audience at The Flying Monkey Moviehouse and Performance Center in Plymouth, N.H.

For starters, the Flying Monkey has just installed a house sound system, which I got to plug into and use thanks to Tom, the helpful sound guy. I usually use a pair of relatively small Roland speakers, but whenever house sound is available, I try to use it.

And after some adjustments of levels for different settings, it seemed to work pretty well. It's certainly different, and it's hard for me to tell from where I sit -- it sounds a little muffled, more than I like, and I can't seem to get the volume differences I'm used to with direct output.

But audience members said it sounded great, and Tom saved the settings we used, so I guess we'll keep using it. I'm surprised, however, at how different the synth patches sound when run through different systems. It's a variable that I'd rather minimize as much as possible so I can concentrate on doing music.

Speaking of which: Not sure why, but these big, sprawling Biblical epics seem to lend themselves to my kind of stuff. It might be in the pacing: 'Ben Hur,' like others, is full of portentous moments where "big" things are happening, and the overall pace is pretty leisurely, and somehow music I do seems to highlight the drama and keep it all together. 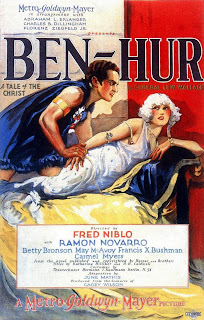 One unexpected challenge is in the galley slave scenes, where the presence of a sailor beating two big timpani to give rhythm to the rowers presents the age-old question to all accompanists: do I try to match the action (which some folks regard dismissively as "Mickey Mouse-ing it") or do I do music that's not specifically synchronized to what's on screen.

In this case, I think the use of the timpani is so obvious, and sets the tempo for the whole scene, and the timpani settings on the synth are really good, so I opted for trying to match it. But I didn't plan it out too well, and it turns out the pace of the timpani beats on screen is incredibly SLOW.

For awhile I tried to match it, but then the action would go elsewhere, and when we cut back to the timpani, it would be horribly out of synch. So I eventually gave up, thankfully saved in time by the chaos of the pirate attack sequence. I still think it could work well, but I'll have to look at this sequence again before we screen the film in Wilton, N.H. on Sunday, April 24.

And then there's the chariot race scene. I had in mind one of those controlled Shostakovich gallops in 2/4 that you sometimes encounter, with a fast-but-not-too-fast tempo of repeated notes in bass, strong off-beats, and menacing chords above it gradually growing in intensity throughout the whole sequence, cycling through the keys to contribute to ever-growing tension.

The chariot race is some of the best stuff from the silent era, and it was such a thrill to create music to help bring it to life! I've watched it several times now, and I'm still catching nuances that they were able to capture between the actors in all the footage that was shot. I think it ranks as one of the great editing jobs of the period.

When I checked out the Carl Davis score on the Photoplay restoration, I was surprised to find the chariot race was done with music in 3/4 time. It was fabulously effective in a kind of Richard Strauss-heroic way, so it just goes to show you how vastly different musical approaches are possible for the same piece of film.