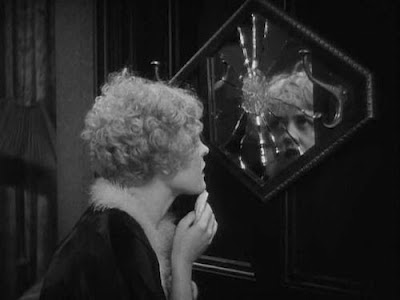 Roxie Hart (Phyllis Haver) examines the results of pulling the trigger while a player piano grinds away in the background.

Last night we ran the original 'Chicago' (1927), and it's a fun film for music, with a lot of good scenes that lend themselves to a brash sycopated kind of score, and some dizzy transitions from drama to comedy that music can help bring to life, I think.

At a few key points when the tension amps up, the movie cuts to the piano grinding away, its keys moving up and down in that ghostly "look ma, no hands" manner that player pianos have about them. 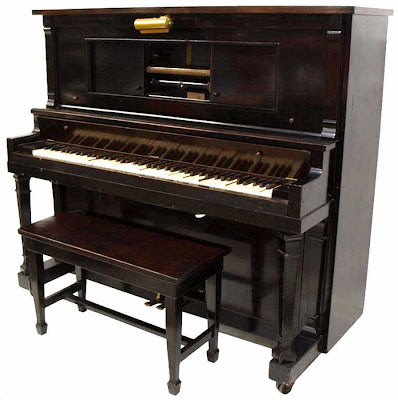 A typical player piano of the era, ready for its close-up.

How interesting in a silent film to use a musical instrument to help set a scene visually, but leave it up to the pit musicians to figger out how to bring this to life?

So how do you score this? Do you just morph the orchestral texture into a kind of honky-tonk sound and leave it at that, or do you switch specifically to a solo piano sound and play that up? Or something else?

And whichever path you choose, how do you do it without taking away too much attention from the film?

Well, I chose to switch to a solo piano sound whenever the thing was switched on, if nothing else than for variety. If it worked at all, it's because at least it's easy to spot the moments coming: 'Chicago' has exactly three player piano sequences that are easy to see before they happen, and their end is visually signaled as well.

I wasn't overly thrilled with the results, but people at our screening at the Manchester (N.H.) Public Library said they thought it worked quite well! Just goes to show that how you think you did sometimes varies tremendously from what others perceived. 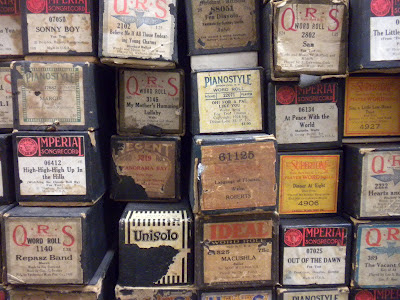 The music for player pianos came in the form of 'piano rolls,' quantities of which continue to turn up in estate auctions all the time.

By the way, I just learned that 1924 was the peak year for player piano sales in the United States. Up until then, business was good at a time when no home was considered truly complete without a piano. (A player piano served as the equivalent of today's home entertainment centers, I guess.) From the mid-1920s on, the player piano's place in the home was rapidly usurped by gramophone records, which boasted much improved fidelity as the 1920s wore on, and also the then-new-fangled radio or "wireless" devices that came on the market then.

So when 'Chicago' was filmed in 1926-7, the player piano already had a kind of sad "not quite with the times" quality about it, which probably added something to the picture's "yesterday's news" theme. And by the time of the stock market crash in 1929, player pianos were last week's cole slaw, and production had virtually ceased.

Looking ahead: After a Labor Day weekend lull, the schedule comes back to life in mid-September with back-to-back screenings of Keaton's great comedy 'The Cameraman' (1928), one on the Maine coast and the other in the mountains of Vermont.

Below is the press release for the screening on Friday, Sept. 14 at 8 p.m. at the Leavitt Theater in Ogunquit, Maine; for the next day's showing, just substitute "Brandon Town Hall in Brandon, Vt." for the venue and 7 p.m. for the time and "free" for the admission, and you're good to go. 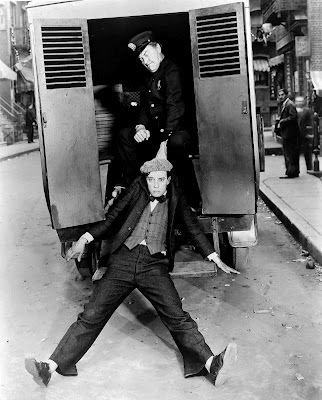 OGUNQUIT, Maine—He never smiled on camera, earning him the nickname of "the Great Stone Face." But Buster Keaton's comedies rocked Hollywood's silent era with laughter throughout the 1920s. Acclaimed for their originality and clever visual gags, and admired for their realistic stories and authentic location shots, Keaton's films remain popular crowd-pleasers today.

See for yourself with a screening of 'The Cameraman' (1928), one of Keaton's landmark feature films, on Friday, Sept. 14 at 8 p.m. at the Leavitt Fine Arts Theatre, 259 Main St. Route 1, Ogunquit, Maine. The program will be accompanied by live music performed by New Hampshire composer Jeff Rapsis. General admission is $10 per person.

In 'The Cameraman,' Keaton creates comedy that plays with the very nature of film and reality. The film contains several classic sequences often cited as among Keaton's best, including a scene where Keaton and a large man both struggle to change into swimsuits in a tiny dressing room. The scene, which runs several minutes long, was filmed in one take. 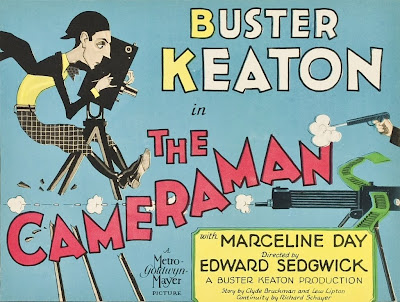 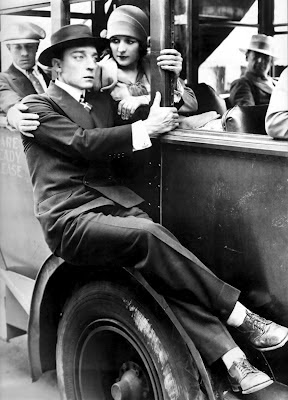 In addition the the feature-length 'The Cameraman,' several Keaton short comedies from earlier in his career will also be screened.

The Leavitt, a summertime only one-screen theater, opened in 1923 as a silent film house. It is currrently in its 89th season of operation in the seaside resort town of Ogunquit.

Rapsis, a New Hampshire-based silent film musician, said the Keaton features were not made to be shown on television or viewed on home entertainment centers. In reviving them, the Leavitt aims to show silent film as they were meant to be seen—in high quality prints, on a large screen, with live music, and with an audience.