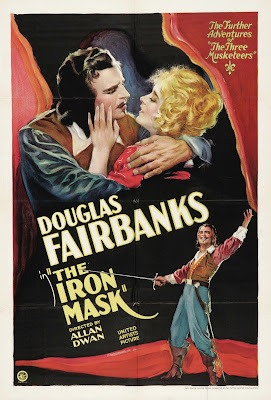 Talk about your moving farewells! Yesterday (Sunday, Aug. 26), we ran 'The Iron Mask' (1929), the last silent swashbuckler from Douglas Fairbanks, at the Wilton (N.H.) Town Hall Theatre as a way to close out our summer-long series of his work.

It was a new film to me, and I was struck how he fashioned the ending to not just finish the film, but also to bid goodbye to his silent film career and the character that had led us all on a decade of great adventures. I don't want to spoil it for anyone, but what happens to Fairbanks at the end (and only in this film, no others), is quite a moving salute both to his career and the art form in which he worked. He knew he was moving on, as was the industry, and he bowed out in a very classy way. Bravo, Doug!

Funny how unexpected things can shape your experience of a film. Fairbanks intended 'The Iron Mask' as a kind of companion film to the earlier 'Three Musketeers' (1921), using many of the same cast members. However, a few changes were made. In the earlier film, the musketeer Aramis was played by Eugene Pallette. When it was time to make 'The Iron Mask,' Pallette had gained so much weight that he was replaced by Italian actor Gino Corrado. That's Corrado as Aramis below, on the far left. 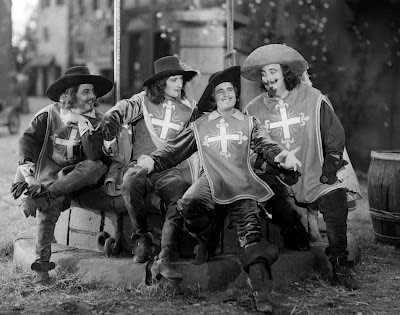 And that would have been that, except for a turn that Corrado's career would take some years later. In 1945, the Three Stooges filmed 'Micro-Phonies,' a classic comedy short in which they play incompetent janitors at a radio station who are mistaken for classical music performers. (Don't ask.)

A highlight of the film is their encounter with a high-strung violinist, played by none other than...yes, Gino Corrado. After Moe, Larry, and Curly succeed in smashing his violin, Corrado becomes so enraged that he grabs a ceremonial sword from a wall and begins chasing them, threatening to "cut you all into little pieces!"and to "kill you to death." In a later scene, Corrado makes an menacing "finger across the throat" gesture before exposing the Stooges as incompetent frauds. 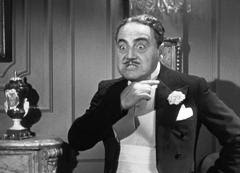 This is a film I've known and watched over and over since childhood. Due to repeated exposure in this one role, Gino Corrado to me will always be the enraged classical violinist who wants to cut the Stooges into little pieces. (There he is at left.) So when he shows up in other movies (and he was a busy guy, appearing in more than 350 films during a long career), it creates a little dislocation for me.

No matter what is happening, I expect Corrado to become enraged, grab a sword, and start chasing people around. That happened a lot when I first watched 'The Iron Mask,' but then of course this is one film in which Corrado actually does spent a lot of time chasing people around with a sword, so it all seemed quite natural.

I don't know this for sure, but it seems there's a direct connection between 'The Iron Mask' and Corrado's several appearances in Stooges films two decades later. One of the sound technicians for 'The Iron Mask' was a young man named Edward Bernds, who would later become a director at Columbia in the short subject department. And guess who directed 'Micro-Phonies?' That's right.

But one of the nice things about these connections is that it spurs my curiosity about some of these actors. And in the case of Corrado, I'm glad it did. Turns out he's the only actor to appear in all three of the big-time classics of Hollywood's golden era: 'Gone With the Wind' (1939), 'Citizen Kane' (1941), and 'Casablanca' (1942). The roles may have been minor, but what an amazing and unique trifecta!

Although Corrado retired in the 1950s, he lived until 1982, when he died at age 89. And get this: According to Wikipedia, "his grave is located at Valhalla Memorial Park Cemetery, and his gravestone epitaph is etched with Corrado's video screen-image from the classic Three Stooges short, 'Micro-Phonies,' with the inscription, "Forever On The Screen - Forever In Our Hearts."

Speaking of Bernds, the future director: why did 'The Iron Mask,' a silent film, have a sound technician? Because Fairbanks knew that for a film being released in 1929, a few dialogue sequences would greatly help its chances at the box office. So that's what he did, and I'm pleased to report that for our screening, we were able to include the two original "talking" scenes as filmed, with Fairbanks addressing the audience directly and exhorting us to follow the grand adventure.

We this once again with a switch rigged up by Dennis Markaverich of the Wilton Town Hall Theatre, who's been running the show there since 1973. (And movies have been shown there since 1912, meaning a full century!) When a dialogue scene comes up, all I have to do is flip an ordinary home light switch and the original soundtrack comes up.

This worked well for a screening of the part-talkie 'Noah's Ark' (1928) earlier this year, and so we pressed it into service for 'The Iron Mask.' The only potential trouble would be in me forgetting where the dialogue scenes start and stop, but 'The Iron Mask' was pretty easy: one at the very beginning, and one after the title 'Twenty Years Later.' 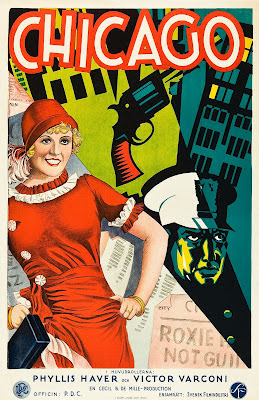 Okay, moving onward: if you missed Eugene Pallette as Aramis in 'The Iron Mask,' he shows up in 'Chicago' (1927), the next silent feature I'm doing music for. It's screening on Tuesday, Aug. 28 (hey, that's tomorrow!) at 6 p.m. in the downstairs auditorium of the Manchester (N.H.) Public Library, 451 Pine St. Admission is free.

The original silent 'Chicago' is another title I've never done but wanted to, so I'm looking forward to it. I had hoped to do it a couple of years ago when the Ogunquit Playhouse, a well-known regional theater in our part of the world, was presenting the much-more-recent stage musical 'Chicago,' which would make the silent film version a nice companion piece.

But alas, it didn't happen, and so I'm still hoping to work with a theater company on a pairing like this. Any takers?