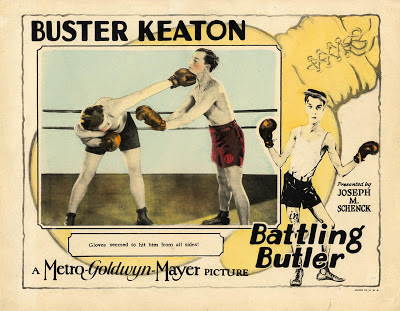 In planning our monthly silent film series at the Manchester City Library, I realized that over the years I'd done music for all of Buster Keaton's starring silent features except one: his boxing comedy 'Battling Butler' (1926).

What's more, I realized that I somehow hadn't ever had a chance to see it all from start to finish. For some reason, there was always something else to do.

I'd certainly read about it, and was always fascinated with how Buster went for a dramatic fight at close quarters for his ending. And the idea of two guys physically fighting in front of a shocked woman does kind of appeal to the brute in me. :)

I was also intrigued that 'Battling Butler' was Keaton's highest-grossing picture of the 1920s. It earned something like $750,000 in its initial release, far more than acknowledged masterpieces such as 'Our Hospitality' (1923) and 'The General' (1926). I wondered why — boxing was much more "mainstream" and popular in the 1920s, so maybe that had something to do with it.

So I scheduled 'Battling Butler' for Tuesday, Jan. 15 at 6 p.m., looking forward to the opportunity to get to know this one remaining Keaton that was unfamiliar to me.

And sometime last month, I couldn't sleep, so early one morning I wandered down to my home office, picked 'Battling Butler' off the shelf, and popped it into my DVD player for a look-see.

In doing so, I realized that I was in for something that would prove to be a rare experience: my very first exposure to one of the big Keaton silent features, the last one I'd yet to get to know. It was like Beethoven had written a new symphony! 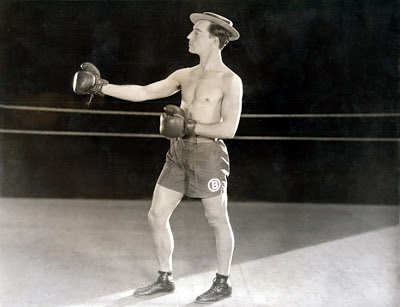 And yes, the film is full of comic ideas that I think hold up quite well on their own, thank you. The opening "outdoorsman" scenes in particular are often laugh-out-loud funny, and I'm really looking forward to doing them with an audience present.

One thing that also struck me (hey, it's a boxing film) was how adept Keaton had become at using film to help tell his story, and especially how he used camera placement and faces. There's a scene where he has to leave his girl behind, but her face remains framed in the rear window of his car as he drives away. And another time, when he's sparring ineptly, he catches his girl's face in the crook of his trainer's elbow — and shows us, the viewer, what he sees. It's quite remarkable filmmaking for any era, not just the silent years.

Because it's a sports film, I'm coming up with a brand new march that I hope can be used to create atmosphere and also underscore the comedy. (Plus, there's a marching band in a key scene.) Scoring the actual fight scenes will be interesting, too. Hope you can join us on Tuesday, Jan. 15 at 6 p.m. (early start!) to see how 'Battling Butler' holds up. More info is in the press release below... 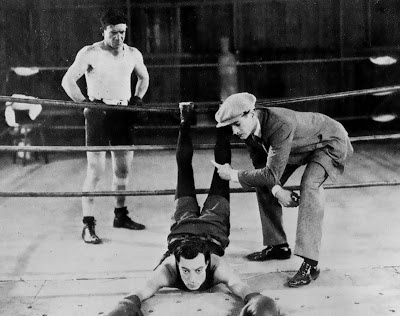 MANCHESTER, N.H.—He never smiled on camera, earning him the nickname of "the Great Stone Face." But Buster Keaton's comedies rocked Hollywood's silent era with laughter throughout the 1920s. Acclaimed for their originality and clever visual gags, and admired for their realistic stories and authentic location shots, Keaton's films remain popular crowd-pleasers today.

See for yourself with a screening of 'Battling Butler' (1926), one of Keaton's landmark feature films, on Tuesday, Jan. 15 at 6 p.m. in historic Carpenter Auditorium at Manchester City Library, 405 Pine St. in downtown Manchester, N.H. Admission is free; donations are encouraged to defray expenses. The program will be accompanied by live music performed by New Hampshire composer Jeff Rapsis.

'Battling Butler' tells the story of pampered Alfred Butler (Keaton) who tries to impress the girl of his dreams (Sally O'Neil) by pretending to be a championship boxer with same name. The masquerade leads to knockout comedy both in and outside the ring, giving Keaton ample opportunity to display his gift for physical and visual comedy.

As a performer, Keaton was uniquely suited to silent comedy. Born in 1895, he made his stage debut as a toddler, joining his family's knockabout vaudeville act and learning to take falls and do acrobatic stunts at an early age. He spent his entire childhood and adolescence on stage, attending school for exactly one day. 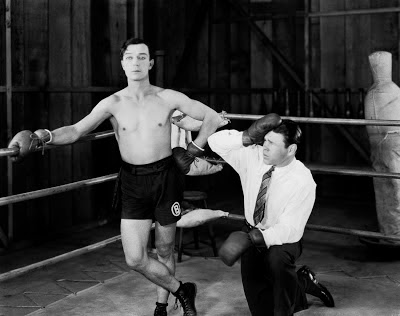 Jeff Rapsis, a New Hampshire-based silent film musician, said the Keaton features were not made to be shown on television or viewed on home entertainment centers. In reviving them at the Manchester Public Library, organizers aim to show silent film as they were meant to be seen—in high quality prints, on a large screen, with live music, and with an audience.

"All those elements are important parts of the silent film experience," said Rapsis, who improvises accompaniment as a film is screened. "Recreate those conditions, and films of early Hollywood leap back to life in ways that can still move audiences today. They all featured great stories with compelling characters and universal appeal, so it's no surprise that they hold up and we still respond to them."

Upcoming silent films at the Manchester City Library include:

• Tuesday, March 5, 2013, 6 p.m.: 'Conductor 1492' (1924), starring Johnny Hines. In honor of St. Patrick's Day, join obscure comic Johnny Hines in a fast-paced romp about a young lad from the Emerald Isle who comes to "Americky" to make his fortune—but the fun really begins when dear old dad arrives from the Old Sod to help fight his son's battles.