Coming up next in Boston:
'Faust' on Wednesday, Jan. 23 at the Brattle 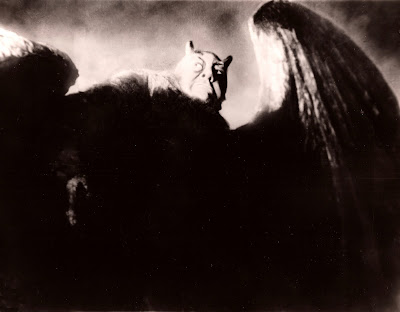 The great Emil Jannings in extreme make-up as Mephisto in 'Faust' (1926).

Although I generally favor good over evil, it's my honor to play a part in the Brattle Theatre's ongoing "Dead of Winter: Satan on Screen" series.

To that end, I'll be providing live music for a screening of the great F.W. Murnau film 'Faust' (1926) on Wednesday, Jan. 23 at 7 p.m. Alas, this was just arranged last week, so there hasn't been time for a lot of advance publicity.

Still, Satan always draws a crowd, so I'm looking forward to helping bring the devil to life this week at the Cambridge revival house, which continues to offer great film of all eras all year round on the big screen in a theater.

I'm coming off a recent spurt of silent film activity -- a 10-day period that saw five separate shows in widely varying venues. Here's a summary of what I learned.

- W.C. Fields remains enough of an iconic figure for today's audiences to respond readily to his silent films. A screening of 'Sally of the Sawdust' (1925) on Thursday, Jan. 10 in Plymouth, N.H. draw a warm response from a crowd of about 50 people. I think D.W. Griffith's ability to structure a story for maximum audience response was a big help, but Fields himself really carried the picture. People really seemed to like Carol Dempster as well. I found the music for this really fell together nicely.

- A screening of 'Battling Butler' (1926) on Tuesday, Jan. 15 showed that even "lesser" Keaton has the power to hold an audience. I hadn't done this one before (it's the last of Keaton's features that I'd yet to tackle) and I was curious what the reaction would be, as it lacks the usual Keaton all-outdoors climax on a grand scale. Our audience of about 40 people at the Manchester (N.H.) City Library enjoyed it thoroughly, although the opening scenes of Buster ineptly hunting did not create nearly the reaction I thought they would. However, the training sequences in the boxing camp (which I've always thought were pretty routine) produced gales of laughter. Go figure. And, surprise again, Keaton's fight-in-close-quarters climax actually works very well in a theater. I liked the music for this, as I was able to invent a "rah rah" sports march that was useful throughout the score.

- Our encore showing of Fritz Lang's forgotten epic 'Woman in the Moon' (1929) on Wednesday, Jan. 16 attracted about 30 people to the screening room of Red River Theatres in Concord, N.H., where a screening on New Year's Eve had been sold out. Musically, I think I had better material on hand this time around, and so it was more satisfying on that score. This film continues to amaze me, and our audience seemed astonished, too. Even after a three-hour movie, we had a lively question-and-answer session.

- On Friday, Jan. 18, I made the trek to one of my favorite events: the annual "Arisia" science fiction and fantasy convention, held at the Westin Hotel in downtown Boston. This four-day event attracts more than 3,000 attendees, many dressed in elaborate costumes, and is diverse enough to include a silent film screening with live music. This year's entry was 'The Lost World' (1925), in the form of a truncated 16mm show-at-home print that still managed to hold the audience of about 50 people in a large conference room that doubled as the convention's film theater. (Four full days of film, much of it in 35mm!) With all the distractions of trying to unload my gear, get it up to the theater, find parking, etc., it was not easy to pull my head together for the score, but I felt it held together well enough. What really made it worthwhile, however, was the crowd reaction: lively from the start, it peaked with applause at the scenes of the dinosaur wreaking havoc on the streets of London. The images are truly iconic, and they've fired my desire to program the fully restored version of this film in future programs.

- Finally, a screening of Paul Leni's 'The Man Who Laughs' (1928) at the Wilton (N.H.) Town Hall Theatre on Sunday, Jan. 20 drew only a lower-than-expected turnout due to football playoffs happening at the same time. I think we had about 40 people (usually we get at least double that) for this picture, which I think has a lot to offer. Alas, I hadn't had much time to prepare for it, and after a week of pushing myself, the score that I came up with was a little random and not very focused, I'm afraid. It was all recycled material, which sometimes happens when I don't have time to ponder a film and let new ideas germinate. I guess given the improvisatory nature of my accompaniment, I need to be careful not to overdo it. Still, people seemed appreciative

One thing I've noticed recently is that if I make time to eat a full and good meal prior to a performance, I seem to do better. I did that for 'Sally' in Plymouth and 'Woman in the Moon' in Concord, and both scores fell together quite well. On the other hand, I was frazzled with a dozen errands and distractions prior to today's screening of 'The Man Who Laughs,' and the music seemed to suffer. So there's definitely a pattern here. Something to keep in mind as I figure out the right balance of too much and not enough to stay in the zone of good silent film scoring.

Alas, on Wednesday, I teach a course in Manchester, N.H. just prior to racing down to Cambridge, Mass for 'Faust,' with just barely enough time to set up before showtime, so I won't have a chance to nourish myself in the big city. Perhaps I'll pack a dinner and eat it in the car on the way down. Ah, the glamour of show biz!