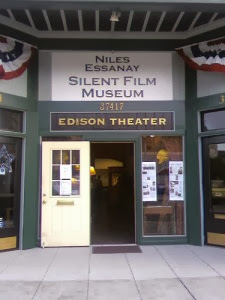 Over Thanksgiving weekend, I had the pleasure of visiting the Niles Essanay Silent Film Museum in the East Bay area, about an hour's drive outside San Francisco.

This visit was a surprise to me, as I was just making a quick trip to the "left coast" to be with family for the holiday. Silent film wasn't even on the agenda—and besides which, the Niles Museum is only open on weekends, and I was only in town from Wednesday through Friday.

But my 50th birthday is coming up next month, and so it was decided to surprise the family "silent film nerd" with a trip to the Essanay museum. To accomplish that, my brother-in-law somehow persuaded museum guardians Rena and David Kiehn to open the place on the Wednesday before Thanksgiving. (The fact that another group had requested a visit at the same time helped seal the deal.)

And so that night I found myself entering the Niles Essanay Silent Film Museum, which is housed in a vintage 1913 theater that functioned for many years as a warehouse and a portrait studio before being reclaimed for cinematic and historic purposes a few years ago.

It's a very interesting place to which I'd like to return for a more in-depth visit. The collection includes a wide range of silent film memorabilia and equipment, some of it related to the Essanay film company that operated just down the street, and some of it more general. As it was, I thoroughly enjoyed Rena and David's efforts to put the Essanay operation (and all of early cinema) into a general context for a small group of newbies. They do a great job bringing the period to life! 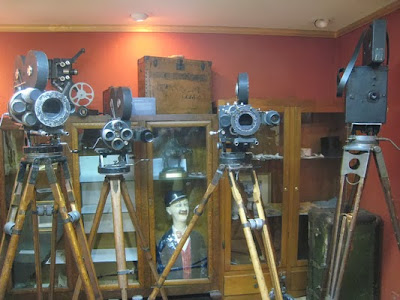 A collection of vintage film cameras and other equipment on display in Niles, including a life-sized Ben Turpin mannequin that sometimes mans the ticket booth.

I did get a chance to talk with them both afterwards. In the now-small world of silent film, many of their regular performers are people I've become acquainted with. Jon Mirsalis performs regularly for their weekend screenings, and Judy Rosenberg (with whom I'm on the bill at Cinevent in Syracuse, N.Y. this coming March) has been there recently. I hope to join in maybe during some future visit, if that's possible. What a privilege it would be to help silent film come to life here!

And fair is fair: I told the Kiehns that if they ever found themselves "back east," they shouldn't hesitate to look me up so I could show them around some of the various theaters where silent films run out here.

Afterwards, I got to thinking: what would I really show them? Truth is, the vintage theater scene in New England is a really mixed bag, with every cinema operating under a different model. For some houses, the recent need to convert to digital to continue running first-run movies has caused a lot of stress and anxiety.

So here's a round-up of some of the theaters in my corner of the world, and how they're coping with a changing movie business.

• The Leavitt Theatre, Ogunquit, Maine. The Leavitt, a 600-seat one-screen summer-only (no heat, no A/C even to this day) opened in 1923, and has barely changed since. The wooden seats still carry wire loops underneath to allow gentlemen to stow their hats! Declining attendance and the high price of converting to digital has forced Peter Clayton, owner/operator since 1976, to consider closing the place, but he's soldiered on with a diverse mix of programming (including silent films with live music) to get him through the past couple of seasons.

Upon learning that no 35mm prints at all would be available in 2014, Clayton was ready to pack it in until his family decided to try crowd-funding to raise the needed $60K for a new digital projector. Clayton agreed, and a one-month Kickstarter campaign was launched last month. By the end, the donations had topped $70K, giving the Claytons enough to convert to digital as well as possibly install air conditioning for those sweltering Maine nights. In any event, the theater will remain open in 2014 and beyond, presumably.

Status: With two sons ready to take over from their Dad, the Leavitt's future is bright.

• The Ioka Theatre, Exeter, N.H. A one-screen house opened by Louis B. Mayer (who would later head MGM) in 1915 with 'The Birth of a Nation,' this 400-seat theater was a mainstay in downtown Exeter until it closed at the end of 2008, in part because a mandatory upgrade to the fire sprinkler system was cost-prohibitive. Two separate community plans were hatched to convert it into a performing arts center (that would include silent film with live music), and yours truly helped in the fund-raising in the hopes that the theater could reopen.

But the only thing that's happened is that the property was bought at auction two years ago by a local investor who has proven to be somewhat difficult to work with. The most recent effort to save the theater (by a group called the Exeter Theater Co.) raised about $200,000, but recently decided to disband (and return all the money to donors) due to an inability to work out a deal with the new property owner.

There's still hope the building can somehow be reopened as a theater, but it seems likely that this nearly 100-year-old gem will be converted to condos or some other more profitable use. And this is sad because Exeter is a fairly prosperous town (it's home base to prestigious Philips Exeter Academy, for Pete's sake!) and you'd think a rescue effort for a valued part of the town's cultural infrastructure would succeed here.

Status: A sad story of a theater that just couldn't seem to get a break.

• Flying Monkey Moviehouse and Performance Center, Plymouth, N.H. What is now the Flying Monkey was for decades a low-rent downtown moviehouse, originally one screen but at some point bisected down the middle to make two very narrow theaters with much smaller screens. In its final incarnation as the Spinelli Cinema, the place finally closed in 2008, a victim of the recession, poor attendance, and deferred maintenance.

Then native son Alex Ray, unconventional owner of a chain of successful New Hampshire restaurants, stepped in. Always concerned with the built environment, Ray thought it unthinkable that his town's local moviehouse would close, and worse, might possibly get torn down. So he bought the property in 2009, lavishing a thoroughly marvelous makeover on the 400-seat old lady, returning it to one screen and adding considerable catering facilities. Rechristened 'The Flying Monkey,' is was reopened in 2010 as a perfomance center for live music and, yes, movies. (The name comes from 'The Wizard of Oz.')

And so now this former B-grade first-run cinema attracts A-list live entertainers ranging from Paula Poundstone to the Cherry Poppin' Daddies. Plymouth is a college town and in a summer recreation/tousim area, so business at the Flying Monkey has been acceptable, and continues to grow. And yes, it runs a monthly silent film program with live music, which Alex loves because it helps keep the building connected to its roots.

Status: Would have been a hole in the ground if not for a community-minded visionary. One very lucky theater!

• The Town Hall Theatre, Wilton, N.H. Named the "best movie theater in New England" by Yankee Magazine, the 250-seat first-run Town Hall Theatre resides in the upper levels of Wilton's sprawling Victorian-era town hall. Movies were first screened here in 1912; the current set-up has been run by owner/operator Dennis Markevarich since 1973. Over the years, the place has thrived by programming unusual first-run films that don't play these parts otherwise; meticulous attention to picture and sound; reasonable admission and concession prices; a quirky movie-centric atmosphere (vintage posters abound); and the best darned popcorn of any movie theater anywhere.

And yes, there's room for classic films (every Saturday afternoon), and I've run a monthly silent film series there since 2008. I've known Dennis since I was in junior high, and I consider the Wilton Town Hall Theatre my "home base" as far as silent film accompaniment goes.

But now the theater stands at a crossroads. Dennis wasn't eager to switch to digital, mostly because of the daunting cust. And until now, he's managed to get every big first-run film he wanted in 35mm. But 2014 really looks to be different, so Dennis is now making an effort to raise funds to help with the expensive conversion. However, he's been very low-key about it so far—putting out jars for contributions and setting up an account at a local bank for donations. Not a lot of hype, and no online crowd-sourcing effort just yet, and maybe not ever.

The thing is, this is a beloved regional institution, and I'm absolutely certain that Dennis would be swamped with contributions if he did an online campaign. But you can't force someone to do something that's not desired. Either way, I hope the effort is successful, because life without the Town Hall Theatre would be unimaginable. I've offered to do a benefit screening in early 2014 to help out; in the meantime, most of the chatter about donations is on the theater's Facebook page. Check it out, and mail in a contribution if you can.

Status: Somehow I feel this one will endure.

There are others, but I'll stop here, as it shows quite a diversity of how small theaters are adapting to changes in tastes and technology. All of them do (or would) make room for silent film with live music, so I'm grateful to everyone who helps keep these places going. Without them, we'd all be much poorer in terms of cinema and quality of life in general, I think.