Coming up: Two chances to see documentary
'Nanook of the North' in the dead of winter 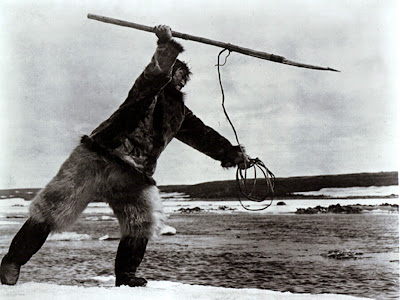 Nanook prepares to launch his harpoon in 'Nanook of the North' (1922).

As I write this, New England is about to be buried under anywhere from one to two feet of snow.

Your mileage may vary, but forecasts call for a significant storm on Tuesday, Jan. 27.

Well, it's winter here. And what better setting to take in a ground-breaking documentary about life north of the Arctic Circle?

Yes, coming up are two chances to see 'Nanook of the North' (1922), Robert Flaherty's hit 1922 look at Nanook and his family as they struggle to survive. 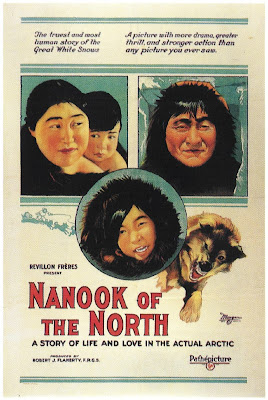 You can see it on Friday, Jan. 30 at 7 p.m. at the Harvard Film Archive in Cambridge, Mass.

And it's being screened again on Tuesday, Feb. 3 at 6 p.m. at the Manchester (N.H.) City Library.

More info about the screenings and the film is in the press release below.

But let me say I'm really looking forward to these screenings, as 'Nanook' is one of the "big" silent film titles that I've yet to tackle—until now.

As a documentary, it lends itself to a very different approach for music than a traditional narrative story.

Rather than straight-up melodies or tunes, I'll probably head in the direction of "textures." By that, I mean repeated patterns, cells, and cycling chord progressions.

For a documentary, I do think there's quite a bit of emotion that can be mined from finding a suitable texture and then adjusting it as the scenes change.

So what kind of texture for 'Nanook?'

Well, I keep thinking of how Puccini created an atmosphere of "cold" in La Boheme by harmonizing things in open fifths. 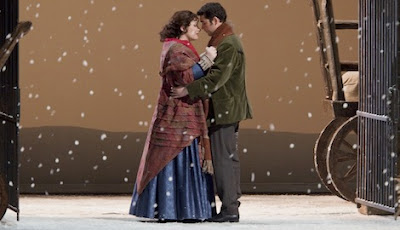 Snow in a scene from Puccini's 'La Boheme.'

That may play a role in what happens next Friday night at the Harvard Film Archive.

We'll see. In any case, you might want to bring an extra coat. 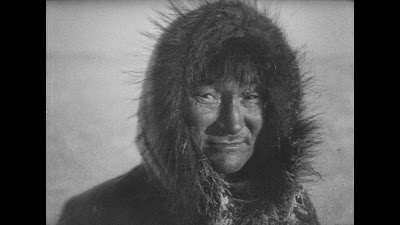 The man himself. Like Elvis or Liberace, he needs only one name.

Ground-breaking silent film to be screened in 35mm with live music on Friday, Jan. 30 at 7 p.m.

CAMBRIDGE, Mass.—A film hailed as the one of the first to show the potential of the movie camera to take audiences to distant lands will be shown this week at the Harvard Film Archive.

'Nanook of the North' (1922), a ground-breaking film about life among Eskimos above the Arctic Circle, will be screened on Friday, Jan. 30 at 7 p.m. at the Harvard Film Archive in Cambridge, Mass.

The classic silent documentary, to be screened in 35mm, will be shown with live music by silent film accompanist Jeff Rapsis.

Director Robert Flaherty’s film tells the story of Inuit hunter Nanook and his family as they struggle to survive in the harsh conditions of Canada’s Hudson Bay region.

The screening is part of a retrospective of Flaherty's work and career that continues through March 1 at the Harvard Film Archive.

Remarkably matter-of-fact in its blow-by-blow depiction of the everyday struggle to stay alive in the Arctic hinterlands of Canada’s Hudson Bay, 'Nanook of the North' expresses Flaherty’s reverence for his Inuit subjects in every carefully framed shot.

The film, which emerged from a return trip up North after celluloid from a preceding adventure went up in flames, unfolds as a series of long takes interspersed by occasionally poetic intertitles, all of which serve to highlight seemingly mundane tasks required for survival in the frigid terrain.

Beyond its educational function, though, Flaherty’s profoundly empathetic intimacy with his subjects—the resilient, prodigious seal-and-walrus-hunter Nanook and his weathered clan—heightens what seems on the surface to be merely a dry informational pamphlet. 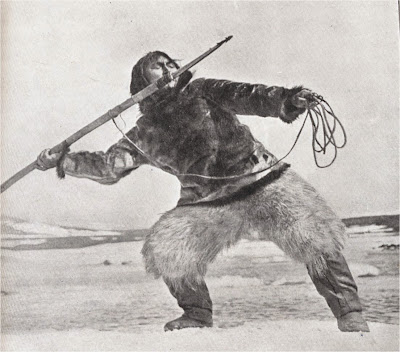 Another classic spear-throwing image from 'Nanook of the North.'

To make the film, Flaherty built an ad-hoc film processing lab in the challenging Arctic conditions and trained his Inuit friends to be his technicians.

Immersed in the culture for over two years, Flaherty embraced the new artform as a transformative vehicle to show modern audiences that without all the complications and trappings of modern civilization, lives could be happily lived—even under nature’s harshest conditions.

Enormously popular when released in 1922, 'Nanook of the North' is a cinematic milestone that continues to enchant audiences.

In 1989, 'Nanook of the North' was one of the first 25 films to be selected for preservation in the U.S. National Film Registry by the Library of Congress as being "culturally, historically, or aesthetically significant."

‘Nanook of the North' (1922) will be shown in 35mm with live music on Friday, Jan. 30 at 7 p.m. at the Harvard Film Archive, located in Carpenter Center for the Visual Arts, 24 Quincy St., Cambridge, Mass. Tickets are $9 per person/$7 students & seniors. For more information on the screening, visit http://hcl.harvard.edu/hfa/ or call 617-495-4700. For more information on the music, visit www.jeffrapsis.com.