Thoughts on Able Gance's 'J'Accuse';
then off to the Kansas Silent Film Festival 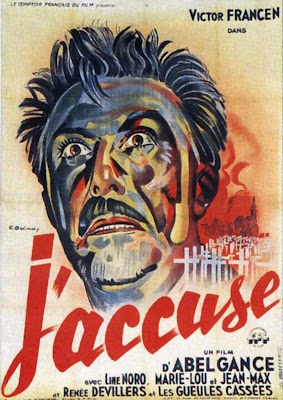 February, a short month, has felt even more abbreviated this time around due to a packed calendar, a multitude of performances, a trip to London, way too much snow to shovel, and lots of other distractions.

And now I'm fighting a cold as I prepare to leave tomorrow for the Kansas Silent Film Festival, to be held on Friday & Saturday, Feb. 27-28 at Washburn University in Topeka, Kansas.

I'm reminded of the Chinese proverb that goes like this: 寧為太平犬，不做亂世人. I'm told it's translated as “Better to be a dog in a peaceful time than be a man in a chaotic period.”

But out of chaos can come extraordinary things. And into that category I must put a screening of 'J'Accuse' (1919) this past Sunday night at the Harvard Film Archive.

The film, a three-hour Able Gance epic, was part of the HFA's ongoing series exploring World War I as depicted in the movies.

I was thrilled to be asked to accompany 'J'Accuse,' a film I'd never done before. But the screening happened to be on the same day I was scheduled to return from London.

Was it wise to try accompanying a three-hour epic after just getting in from a trans-Atlantic flight? Do you think I even asked that question?

Programmer David Pendleton was a bit dubious about bringing me in under the circumstances. But let me do it, and I'm glad he did!

However, getting to the HFA on time became a worry when we became stuck for more than an hour on the tarmac at Heathrow in London due to a baggage issue. 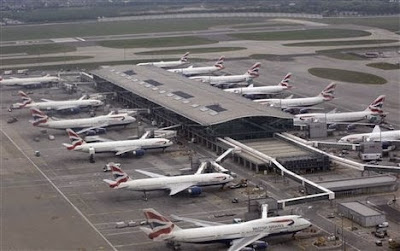 Stuck on the tarmac at Heathrow's Terminal 5.

We arrived in Boston just before 3 p.m.—more than an hour late. To get back home to New Hampshire and get my digital keyboard, I had to make a 3:25 p.m. bus. Standing in a long slow-moving line for customs, I figured I'd missed my ride. So I was already mentally preparing to head over directly to Harvard and try my best using their acoustic piano.

But by some miracle, I made the bus, got home, loaded the synthesizer and gear, and then drove an hour back down to Boston, arriving at the HFA just as the prior screening was finishing up.

I don't know if this steeplechase-like journey was a contributing factor, but I felt the music I came up with for 'J'Accuse' was very satisfying and effective.

I used two basic themes: one new, but based on the same chord structure as 'When Johnny Comes Marching Home,' and another that I created last year for a screening of the Italian epic 'Cabiria' (1914).

Not having seen the film, I was surprised a few times by Gance's rapid cutting and unexpected transitions. But the film was easy to follow and everything came together quite well, I thought. There were some big moments and I think I caught most of them.

One handicap I was working under was that in London, I had caught a cold. And so on the flight home, my ears got all screwed up. When we landed in Boston, my ears did not get un-screwed up, and so it was difficult to hear what I was doing in full fidelity.

And it didn't help that somewhere in the middle of Part 1, we lost one of the output channels. Thankfully, projectionist John Quackenbush was able to restore the channel for the remainder of the film. 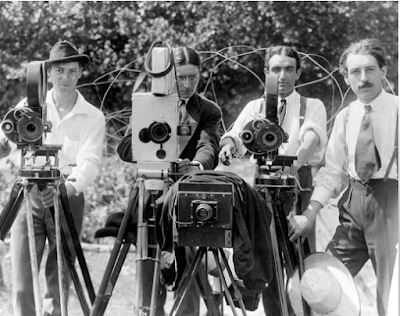 So could I have done a better job if I'd spent a lot of time preparing? Or if I hadn't been on an eight-hour flight? Maybe. But between you and me, I'm not really sure.

Sometimes circumstances conspire so that everything comes together in a certain way. In the case of 'J'Accuse,' the experience began way back in 1919, when Abel Gance made the film.

In contrast, my contribution was all at the last minute, and in real time and under less-than-optimum circumstances. Not only had I not seen the film, but was accompanying it after a long trans-Atlantic flight that same day.

So it was a unique combination of something made long ago and something being made right in the moment, never to be repeated exactly the same ever again.

And that's one of the things that I think will help the art form of silent film remain of interest: the films themselves may not change, but the music performed with them can differ every time.

Tomorrow morning it's off to my 16th consecutive annual visit to the Kansas Silent Film Festival, held each year at this time on the campus of Washburn University in Topeka, Kansas.

Just as February has gone by fast, I can't believe I've been present at this event for enough years now for a newborn to get a driver's license.

I return for many reasons, to the point where it's really become automatic. In February, some people in New England escape to Aruba. I escape to Topeka. 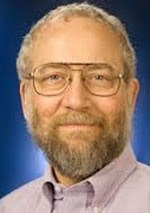 I'm really looking forward to this year's edition because Jon Mirsalis is being brought in as guest accompanist and speaker.

I admire Jon's scoring technique and always learn stuff when I get to hear him play live. What a treat to have him doing music for several features, including part of Griffith's 'Birth of a Nation' (1915) and 'The Seahawk' (1924).

Full report afterwards...and then it's on to a busy March: multitudes of screenings, a trip to Cinefest in Syracuse, N.Y., and probably lots more snow to shovel before this winter is over.