Tired of snow? At Somerville Theatre,
Rin Tin Tin heats up the screen this weekend! 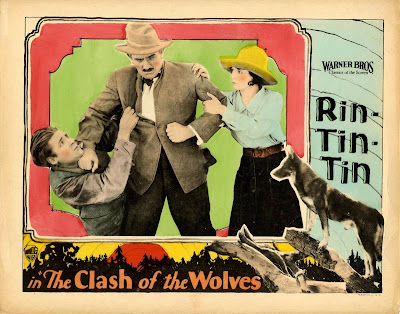 We've already got as much as five feet snow on the ground here, and more is supposed to fall this weekend.

But it'll take more than mere snowflakes to stop Rin Tin Tin from racing across the Somerville Theatre's big screen on Sunday afternoon.

Yes, we restart our monthly series of silent film programs at the Somerville on Sunday, Feb. 8 with a rip-roaring Rin Tin Tin double feature!

The program starts at 2 p.m. and includes two crackerjack adventures starring everyone's favorite silent-era canine star. And trust me: these pictures really move. There's a reason Rin Tin Tin was among the most popular performers in silent film. 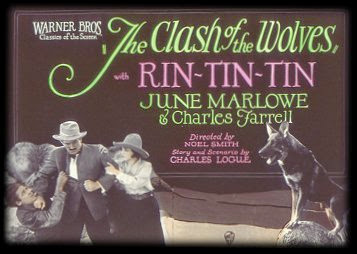 First up is 'Clash of the Wolves' (1925), a fast-paced adventure set out West in prospecting country.

By the way, it's not the old West. The film is actually set in the current day, with Tin Lizzies and other features of then-contemporary life.

But it's old now. And one of the joys of watching a film like this is to see what life was like in a great time of transition.

It's followed by 'The Night Cry' (1926), a film set in California's ranching country. This melodrama pits Rinty against an unusual nemesis. (Come see for yourself.)

They're both being shown via 35mm prints supplied by the Library of Congress, and with live music by me!

Add in an audience and the Somerville Theatre's great vintage theater ambiance, and you have all the ingredients needed to resurrect the original excitement of the silent film experience.

Even cat lovers will enjoy this program! More details in the press release below.

Hope to see you at the Somerville this Sunday afternoon! 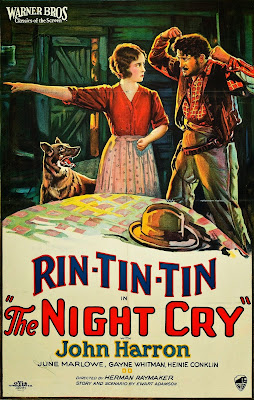 Legendary dog star races to the rescue in double feature of rare classic silent adventure films, presented in 35mm and with live music

SOMERVILLE, Mass. — He couldn't speak. But that was no handicap for a star during the silent film era.

See for yourself on Sunday, Feb. 8 at 2 p.m., when the Somerville Theatre screens a double feature of vintage Rin Tin Tin silent adventure films in 35mm and with live music.

In 'The Night Cry' (1926), Rin Tin Tin is unjustly accused of killing sheep in ranching country; this forces him to flee for his life and hunt down the true killer on his own. 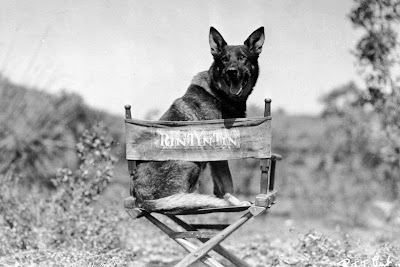 Both films are rarely seen on the big screen now due to lack of availability of prints. For the Feb. 8 program, the Somerville is making use of restored 35mm prints on loan from the U.S. Library of Congress.

Both melodramas were produced by then-struggling Warner Brothers and proved immensely popular around the world, with audiences marvelling at the then-new German Shepherd breed's feats of derring-do as he often out-smarted his human co-stars.

At the time,studio executives referred to Rin Tin Tin "the mortgage lifter" because the dog's pictures helped rescue the ailing studio from bankruptcy.

Both films at the Somerville will be accompanied live by silent film musician Jeff Rapsis, who uses a digital synthesizer to recreate the texture of a full orchestra.

"If you're new to the silent film art form, seeing the Rin Tin Tin pictures in a theater with live music is a terrific way to get acquainted with the enduring power of this kind of movie-making," Rapsis said. 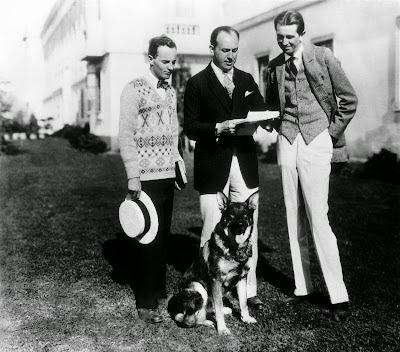 Our canine hero attends to some important studio business.

Rin Tin Tin remained popular throughout the silent film era and until his death in 1932, which made headlines around the globe. But his progency went on to star in later films and TV shows, keeping the name before the public for generations.

Each month, the Somerville Theatre will screen a silent film program in the facility's 900-seat main theatre, always in 35mm and with live music.

"These are the films that caused people to first fall in love with the movies, and they're also part of our theater's heritage," said Ian Judge, general manager of the Somerville, which celebrated its 100th birthday last year.

"When you put the silent film experience back together, it's amazing how the movies jump to life," Judge said. "You can really get a sense of why people got so excited about movies when they were new."

Upcoming programs in the Somerville Theatre's "Silents, Please!" series include:

• Sunday, March 8, 2015, 2 p.m.: 'A Silent Surprise: W.C. Fields Double Feature.' Long before his nasal twang resounded throughout movie theaters, a younger W.C. Fields had a very successful career as a silent film actor. In 'Sally of the Sawdust' (1925), Fields plays a circus con artist who adopts an orphan (directed by no less than D.W. Griffith!); 'Running Wild' (1927) finds Fields as a hen-pecked husband who turns to hypnosis to assert control in his household.

• Sunday, April 5, 2015, 2 p.m.: The original 'Ten Commandments' (1923). Long before Charlton Heston played Moses in Technicolor, director Cecil B. DeMille filmed this silent blockbuster on a grand scale. Many say it surpasses the remake! See for yourself, on Easter Sunday, in a 35mm print provided by the Library of Congress.

• Sunday, May 3, 2015, 2 p.m.: 'The Cameraman' (1928) starring Buster Keaton. Stone-faced Buster attempts to impress the girl of his dreams by becoming a glamorous newsreel cameraman, with disastrous (but hilarious) results. A classic comedy from the peak of the silent film era.

• Sunday, June 7, 2015, 2 p.m.: 'Show People' (1928) starring Marion Davies, William Haines, directed by King Vidor. A young woman tries to break into the movies as a dramatic actress, but can only find work as a pie target in slapstick comedies. Director King Vidor's insider valentine to silent-era movie-making is packed with eye-popping cameo appearances of everyone from John Gilbert to Charlie Chaplin! Plus warm-up comedy 'Play Safe' (1927) starring Monty Banks, with what's regarded as the greatest train chase sequence of the silent era.

• Sunday, July 5, 2015, 2 p.m.: 'The Big Parade' (1925) starring John Gilbert, Renee Adoree, directed by King Vidor. Sweeping World War I saga about U.S. doughboys signing up and shipping off to France, where they face experiences that will change their lives forever—if they return.

A double feature of silent-era Rin Tin Tin adventures will be shown in 35mm and with live music on Sunday, Feb. 8 at 2 p.m. at the Somerville Theatre, 55 Davis Square, Somerville, Mass. Tickets are $15 per person, with discounts for students and seniors. For more info, call the theater at (617) 625-5700 or visit www.somervilletheatreonline.com. For more info on the music, visit www.jeffrapsis.com.