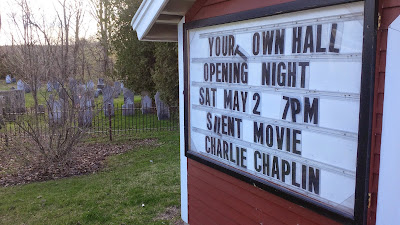 Our Chaplin program killed in Brandon, Vt., although it wasn't responsible for any of the tombstones seen here.

A gap in the accompaniment schedule means I'll be taking a break from blog posting, at least until later in May.

Just this week, though, my summer performance schedule was highlighted in the Hippo, a weekly lifestyle publication that circulates in New Hampshire.

(Full disclosure: I'm co-owner of the Hippo, but we keep editorial and content decisions totally separate from the business side. So I was just as surprised as anyone to see the piece.)

So if you've found this blog through Hippo, welcome! Check out the schedule (click the "Upcoming Screenings" link at upper right) and come experience silent film as it was intended to be seen—in a theater, on the big screen, with live music, and with a live audience.

Just to round up recent screenings...

On Saturday night, I drove three hours up to the small town of Brandon, Vt., where we kicked off the 2015 silent film series at the local town hall with a program of Chaplin short comedies. Huge turnout (well over 100 people) and lots of big laughs, so a great start to this year's efforts.

Then on Sunday afternoon, I drove one hour down to Boston, where a screening of a 35mm print of Keaton's 'The Cameraman' (1928) drew about 150 people to the Somerville Theatre in Davis Square. Strong reaction on that one, too—especially when, in introducing the film, I asked "Any Yankees fans here?" 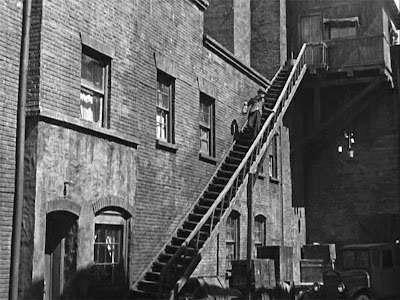 The enormous (and perhaps symbolic) staircase that co-stars with Harry Langdon in 'Three's a Crowd.'

I use the library series to try out films I've never done before to see how they play before an audience. 'Three's a Crowd,' an obscure title which marked Langdon's directorial debut and also the beginning of his rapid popularity decline, got a pretty positive reaction from the 40 or so folks who turned up.

Me, I think it's a deeply flawed picture, but I gave it my best. I did come away thinking it's one of those pictures that would benefit from a carefully planned and integrated score, rather than the improv approach I generally use.

Come to think of it, that's the area that's starting to interest me more and more—the kind of film that lends itself to a through-composed score. So I may be heading more in that direction, which means fewer screenings but more ambitious music.

I think I've learned a lot from the improv approach and gotten a lot of great experience. But now it's time to build on that and come up with some more carefully planned scores that use music to really support a film and help it connect with a contemporary audience.

That takes time, which is one thing I'm generally in short supply of. But it's where I feel I want to go, so we'll see.