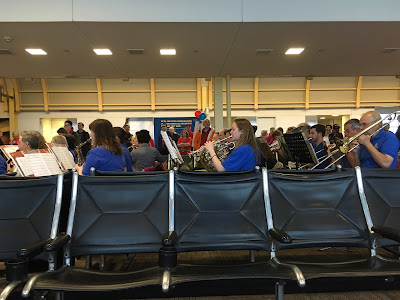 Hey! There's a brass band in my gate area!

Getting my shoes shined this past weekend led to an unexpectedly moving experience—partly musical, and entirely human.

It was Saturday, 7:30 a.m. at National Airport in Washington, D.C. I had just flown in, on my way to do silent film accompaniment at the Library of Congress that day.

My dress shoes were looking pretty shabby. Why hadn't I shined them? Because the C Concourse at National Airport boasts one of one of the best shoe-shine operations around, and I was saving myself if they were open.

They were! And no line. So I walked in, climbed up on the raised chair, and the age-old ritual commenced.

While sitting there, the usual airline terminal white noise washed up against my ears: the murmur of passengers, the shrill boarding calls, the pre-recorded security announcements. Background noise you don't even notice.

But then I heard something that caught my attention because it didn't fit in at all. It sounded like the rat-a-tat-tat of a snare drum!

And not from a speaker, either. From an actual snare drum that wasn't too far away, from the sound of it.

This was followed by the brassy tones of a trombone warming up, and then a clarinet, and other instruments that brought me back to my own band days.

It felt like we were getting ready for Circus Night with the American Legion Post 48 Band in the parking lot of Simoneau Plaza in Nashua, N.H. Where was my tuba?

Being still in mid-shine, I couldn't see what was going on. But it sure sounded to me like an ensemble tuning up prior to, say, a football game or parade.

In an airport concourse?

And it all somehow seemed fitting, as I've recently been rereading the Charles Ives biography by Jan Swafford, and other stuff on Ives. He's a composer close to my heart since I did a research paper on him in 10th grade. 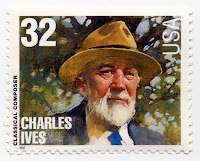 Ives had the same small town New England background I did—one full of marching bands and church hymns and music lessons. (He didn't have Warners Bros. cartoons, though.)

Later, Ives wrote: "In 'thinking up' music I usually have some kind of a brass band with wings on it."

That's the sound I was hearing out in the corridor, coming from somewhere: the racket of a band warming up. Why? How come?

As soon as my shoes were shiny, I went to find out.

Across the corridor, packed into most of the space for Gate 36, was a full concert band, music stands and all. And it looked they were about to play!

And so they did: a medley of World War II songs in big band style. Tunes included 'White Cliffs of Dover' and 'Thanks for the Memories.' 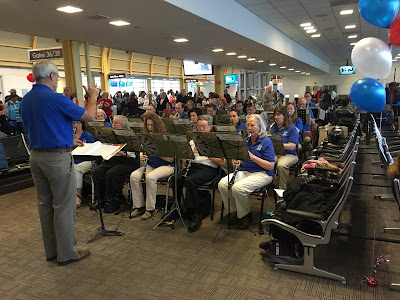 I still didn't get what was going on. What would prompt a band to crowd itself into an airport gate on a rainy Saturday morning? How did the bass tuba clear security?

But the sheer unlikeliness of it all appealed to me, so I figured I'd stick around to hear some music.

What was going on, of course, was that they were there to welcome the impending arrival of an "Honor Flight" of U.S. veterans due in soon from Fort Myers, Fla.

The Honor Flight program brings veterans to the nation's capital at no charge to visit the monuments to their service. I'd heard of it, but never seen it in action.

That was about to change. Soon an honor guard of active duty military personnel assembled in the gate area, flags included. Joining them were several dozen civilians holding WELCOME and THANK YOU signs, and even a passel of cheerleaders carrying pom poms.

And the band? Turns out it was the Main Street Community Band from Fairfax, Va., under the capable leadership of Geoffrey K. Steffens. Even in a challenging acoustical environment, they sounded great.

The warm-up session was cut short by the need to get passengers on a flight to Minneapolis out of Gate 36. But that set the stage for the arrival of the Honor Flight, an American Airlines jet carrying 150 vets not only from World War II, but also Korea and Vietnam.

With the gate clear, the band resumed playing. P.A. announcements that the Honor Flight had landed further swelled the crowd. I found myself getting caught up in the moment. It was really quite moving to see all this being done to welcome vets to the nation's capital.

It's always a joy to see things done well, and this was a class act all the way!

The flight then pulled up. And the vets themselves didn't disappoint.

Emerging from the jetway, many in wheelchairs, each was greeted by a crush of well-wishers as the band kept playing patriotic marches and all of us applauded continuously. You couldn't ask for a warmer welcome—a hero's welcome, really.

Some of the vets laughed. Some posed for pictures. And a few just began flat-out sobbing. All the time that had passed, all the people that never made it, either back then or who were lost along the way—all of it carried forward to this moment of getting off a plane and being honored for what you and so many others did, in some cases so long ago.

What a panorama of emotions on parade—and all on a Saturday before 9 a.m.!

I couldn't help but think of how my father (himself a World War II vet) was famous for choking up at the sound of a Sousa march. There's a little of that in me, I think.

It all made for great theater, not just because of the veterans but because of everyone who was part of the scene. For a little while, a bunch of passing strangers, plus the Main Street Community Band of Fairfax, Va., all came together to bring about one of those shared experiences that are a big part of what life is all about.

A brass band with wings, indeed!

And to me, the sheer randomness of it was exactly what life has always felt like. One minute you're getting your shoes shined. The next, you're applauding members of the Greatest Generation as a band in an airport gate area plays the Guadalcanal March.

And to think I'd have missed it if I'd worn sneakers.

After a half-hour, veterans were still emerging from the plane. I lingered as long as I could, but then had to get on my way to Culpeper, Va. and the Packard Campus, home to the National Audio Visual Conservation Center of the Library of Congress.

The public entrance to the Packard Center.

It was a rainy day: a good one to spend the afternoon in a darkened theater. I was there to do music for two programs honoring Dennis R. Atkinson, donor of more than 350 films to the LOC since 1969.

Asked what title of his he most wanted to see, Atkinson had replied with one word: "Mawas," the first film he turned over to the LOC. So a private screening of it was arranged at noon for Dennis and his family.

There was absolutely no information available on this film from any source I checked, so I was curious what it could be.

I arrived about 11:30 a.m. to find the order of the reels being sorted out by running them on screen: scenes of jungle explorers stalking a leopard, or possibly vice versa.

Turns out 'Mawas' was something of a stock footage festival. Someone had shot about ten minutes of guys sitting around a campfire somewhere out in the American West, swapping tales of far-off jungle lands. And the rest of the film was footage taken from other sources.

I swear some of the footage was from 'Chang' (1927), a much more well known "jungle" picture that earned an Academy Award for "Unique and Artistic Production" at the first-ever Oscars, and which fueled the demand for lesser efforts such as 'Mawas.'

Still, the print looked great, and it was fun to create music as the "drama" unfolded. Once I recognized the flashback structure and episodic nature of the film, it wasn't hard gauge the music to help make it work.

I actually got kinda lost in the film, and worked up some big stuff as it built to something of a climax. So it was a little weird for the film to end, the lights to come up—and to have just four people in the theater.

Many more turned out for the "public" program at 2 p.m.: three obscure comedy shorts and 'Twisted Triggers' (1926), a melodramatic Western.

Having had the chance to warm up and get comfortable at the keyboard with 'Mawas,' I found myself more than ready for the rapid-fire comedy shorts, which were quite good.

Notable was 'Ko Koo Kids,' which turned out to be a satire on the Ku Klux Klan, with members of a KKK-like group attempting to lynch the local schoolmaster for alleged hanky-panky with a young girl.

Lots of alarming stuff in this one, but I had the presence of mind to swing into 'Ride of the Valkyries' when the townsfolk began donning white robes and hoods and jumping on horses.

Speaking of horses: I really got into 'Twisted Triggers,' the featured attraction. Released by "Action Pictures," it lived up to its name, packed with one thrilling scene after another.

This posses a challenge for the accompanist, in the sense that usually any movie has at least a few slower-paced scenes, which help you pace yourself and provide contrast to the action sequences.

Not 'Twisted Triggers!' Any time things slowed down for what seemed to be a quiet scene, someone jumped on a horse and rode off to take care of some life-or-death situation. 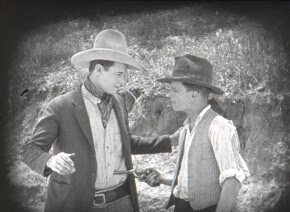 A rare scene without a horse in 'Twisted Triggers.'

So I did my best to keep up, always holding back at least a little so I'd still have somewhere to go. It was only when the good guy and the bad guy wound up off their horses to fight one-on-one in a river that I felt we were at the true climax, which was my green light to go all out.

This time there were people when the lights came up, and response was generous.

While in mid-film, I'm often not sure how what I do comes across. But at the Atkinson screenings, I did feel I gave it my all, and that's a good feeling to have when the lights come up.

Afterwards, Mr. Atkinson seemed delighted by the whole afternoon. It was a treat to talk with him and thank him for his donations over such a long span.

Thanks to everyone at the Library of Congress for bringing me down to help with this one, especially Rob Stone, George Willeman, and Mike Mashon. Looking forward to being down there next month for 'Mostly Lost.'