Off to the Niles Essanay Silent Film Museum, then it's back for 10 screenings in 11 days 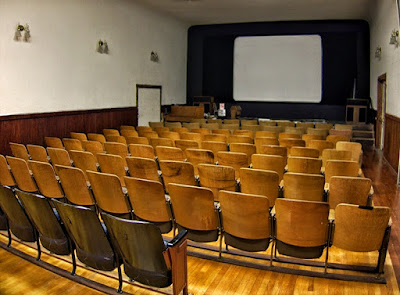 Vintage viewing: the 1913 Edison theater where films are screened at the Essenay Silent Film Museum.

I'm heading West, young man (or whoever is reading this) to accompany a program this weekend at the venerable Niles Essanay Silent Film Museum out in the San Francisco Bay area.

The Niles Museum is special in part because they're one of the few venues anywhere that runs silent film shows every week on a year-round basis.

This gives them the chance to screen a wide variety of at-time obscure titles seldom shown elsewhere.

A good example is the program I'm accompanying on Saturday, May 7: the main attraction is 'The Square Deal Man,' a 1917 western starring William S. Hart as a professional gambler with the amazing name of Jack O. Diamonds.

Geez, I wonder if he's ever been in a card game before? 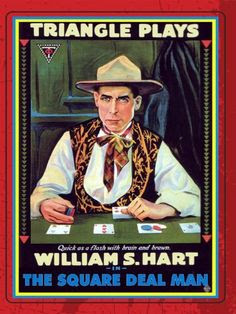 A pair of comedies round out the bill: 'Two-Gun Gussie,' an early Lloyd "glasses character" one-reeler from 1918, and 'Curses!' an Al St. John two-reeler from 1925 directed by Roscoe 'Fatty' Arbuckle in exile.

Like I said: running silent films every week, you can't rely on 'Metropolis' or 'The General.' Niles gives all the other films a chance to be experienced as originally intended: on the big screen, with live music, and in a theater with an audience.

I want to thank Dorothy Fields and all the other great folks at Niles for giving me the chance to do music there.

I enjoy it so much, I almost feel guilty for programming 'Old San Francisco' (1927) earlier this year, a film which climaxes with a recreation of the 1906 earthquake that destroyed San Francisco.

As an accompanist, what I like about Niles is that when I'm there, I get a sense I'm part of an ongoing tradition.

For one thing, the town is where the Essanay company produced a lot of film in the 1910s, Also, the nickelodeon-style Edison theater itself (separate from the studio) was opened in 1913.

And because silent film is run so regularly (as opposed to it being a special or "unusual" event), the place to me feels different from any other space in which I've accompanied silent film.

I don't know. It might be the continuity of weekly programming causes some kind of silent film karma to build up over time.

But sitting before the sturdy upright house piano, I find it amazingly easy to forget myself and slip into "silent film accompaniment" mode.

Who knows? It might be the floor wax they use. But there's something special about the place, and I feel privileged to be able to return for another spell on the bench.

By the way, the only week the Niles theater suspends its silent schedule is the weekend of the big San Francisco Silent Film Festival, which this year is June 2-5.

So any board members or others connected with this prestigious event: come check out the show in Niles this weekend. It's just a short ride across the Bay. 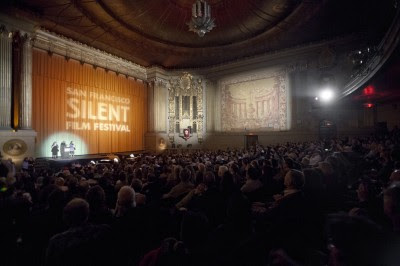 Hey, an accompanist can dream, can't he?

And there's this guy from the backwoods of New Hampshire who would love a chance to be considered for accompanist slots that open up for any future festivals.

After I head back East, a glance at the calendar finds I'm accompanying pretty much a show every day from Thursday, May 12 through Saturday, May 21.

Wow. I'm not sure how this happened, but I'm booked for nine separate performances during those 11 days, including two on Sunday, May 15.

And the run culminates with a quick trip to the Packard Center of the Library of Congress in Culpeper, Va., where I'm doing music for an afternoon program on Saturday, May 21.

So there goes May!

But seriously—I'm delighted at the prospect of settling into a series of shows, as I find I gain fluency and confidence as the run wears on.

Or at least I think so, anyway.

And yes, you do get punchy. Sometimes, in the midst of a heavy accompaniment cycle, I find the reflex is hard to turn off.

I find myself coming up with music as I go through daily life. Walking to the car in the parking lot: pesante octaves in the bass. Getting in the car: F major triad with a B natural to add a glint of light.

But then again, it might be the floor wax.