Playing at a theater that doesn't yet exist: Join me Thurs., 12/1 for the Park's Annual Meeting 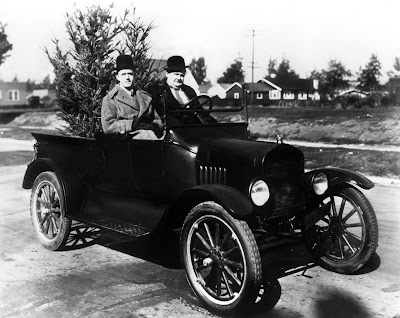 No holiday season is complete without Stan and Ollie doing some 'Big Business' (1929).

On Thursday, Dec. 1, I haul my gear out to Jaffrey, N.H. for the 10th Annual Park Theatre Annual Meeting.

What's going on is that a local group is working to create a theater and performance space in downtown Jaffrey, a small community in the shadow of Mount Monadnock.

At first, their plan was to reopen the Park Theatre, the town's longtime moviehouse that closed back in 1976.

After getting into it, they found the original structure wasn't salvageable. So plans changed to building a new theater, which will begin to rise next year. 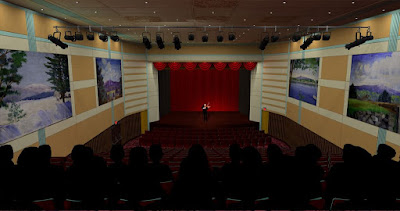 In the meantime, the old place has been razed. So right now, there's no Park Theatre.

For me, it's a great chance to learn more about this exciting project, plus demonstrate how silent film with live music could be a part of what a resurrected Park Theatre might offer.

The program is relatively brief and in keeping with the holiday season: two early Edison shorts plus our friends Stan and Ollie in 'Big Business' (1929).

It's open to the public. For more information on attending, see the press release below.

Many thanks to Caroline Hollister, Steve Jackson, and everyone at the Park for inviting me and including silent film/live music into the Park's portfolio of offerings!

What happened here was about a month ago, I got a call from Paul Bordeleau, a tireless local pianist who specializes in the Great American Songbook and has been a fixture in our part of the world for decades. 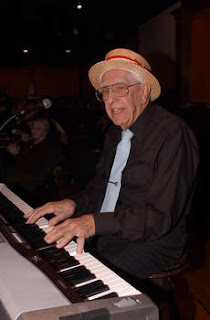 Paul hosts a show on Bedford (N.H.) Community Television in which he does what he does best: each edition finds him playing through maybe six songs.

So Paul wanted to know if I'd be willing to come in and do "five or six songs" of that silent film thing I do.

Being a complete whore for silent film music, I said yes, not quite knowing what "five or six songs" would translate to once we got into the details.

Well, it's worked out that I'll be doing live music in studio for three films: two animated cartoons that are about four minutes each, and then a Snub Pollard one-reeler.

Not a lot, I know, but that's about all you can expect to fit into a half-hour program.

So Thursday promises to be an interesting day of shorter-than-usual silent film shows. Hope you can join me in person, or see you on the air! 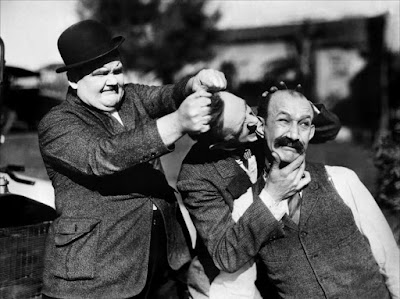 Stan and Ollie celebrate the Yuletide Season with James Finlayson in 'Big Business' (1929). And a happy new ear!

JAFFREY, N.H.—What did people watch before holiday TV programs such as "Rudolph the Red-Nosed Reindeer" and "A Charlie Brown Christmas" first aired in the 1960s?

See for yourself with a special program of holiday classics from way back during the silent film era, all accompanied by live music.

Included will be the first-ever film versions of such popular tales as 'A Christmas Carol' by Charles Dickens and 'Twas the Night Before Christmas,' the poem by Clement C. Moore; each is less than 10 minutes long.

The family-friendly program is part of The Park Theatre's 10th Annual Meeting and Reception, scheduled for Thursday, Dec. 1 from 5 to 7 p.m. at the Jaffrey Women's Club, 33 Main St., Jaffrey.

The meeting and film program are free and open to the public. Attendees are asked to register in advance by either calling (603) 532-8888 or online at http://theparktheatre.net/now-showing/

Live music will be provided by Jeff Rapsis, a New Hampshire-based silent film accompanist who performs regularly at screenings around the nation.

The program will include the first known movie versions of 'A Christmas Carol' (1910) and 'Twas the Night Before Christmas' (1905).

The films each run less than 10 minutes long and were both produced as novelties by Thomas Edison, the inventor credited with pioneering the motion picture.

The evening will be highlighted by a screening of 'Big Business' (1929), a Christmas-themed silent film comedy starring Stan Laurel and Oliver Hardy.

"Even in the early days of cinema, the movies helped popularize classic holiday stories," Rapsis said. "So it's a real treat for us to turn back the clock and see where the tradition of holiday movies and TV specials first began."

The Park Theatre's holiday program will give local audiences a chance to experience silent film as it was meant to be seen—on a large screen, with live music, and with an audience.

Also, it's a sample of the entertainment and cultural possibilities that a revitalized Park Theatre would offer the community.

"All those elements are important parts of the silent film experience," said Rapsis, who improvises a movie's musical score live as it screens.

"Recreate those conditions, and the classics of early Hollywood leap back to life in ways that can still move audiences today," Rapsis said.

The Park Theatre is the dream of Romulo Vanni, an Italian immigrant who sought to better his community with the bold idea of a movie and vaudeville house right downtown. 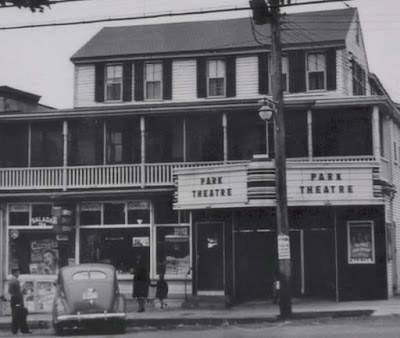 The original Park Theatre in 1941.

In 1922 Romolo cut his house in half and raised it on columns so patrons could pass under it and into his barn for movies and shows. For 54 years, The Theatre was a vibrant center of Jaffrey’s cultural and community life before going “dark” in 1976.

Rediscovered in 2001, the Theatre has become the focus of a community-wide revitalization effort.

Once reopened, it will present movies, children’s programs and live fine arts performances in a state-of-the-art facility. After more than a decade of planning and fund-raising, construction on the new Park Theatre is scheduled to begin in 2017.

A program of holiday silent film classics will be shown as part of The Park Theatre Annual Meeting on Thursday, Dec. 1 from 5 to 7 p.m. at the Jaffrey Women's Club, 33 Main St., Jaffrey.

The meeting and film program is free and open to the public. Attendees are asked to register in advance by either calling (603) 532-8888 or online at http://theparktheatre.net/now-showing/
Posted by Jeff Rapsis at 11:36 AM