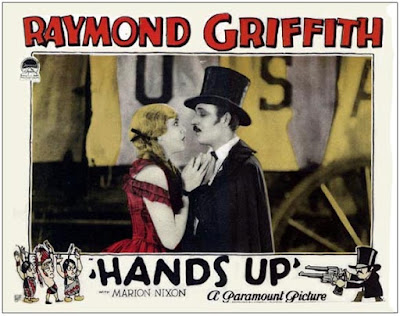 'Hands Up' (1926), part of a double bill of Raymond Griffith comedies this weekend.

Happy Thanksgiving to all! Been away from the blog because so much is going on.

But there's a good silent film program coming up on Sunday afternoon and wanted to get out the word.

The name "Raymond Griffith" doesn't inspire a lot of name recognition these days.

One reason is that many of his films aren't available to be seen and enjoyed.

But at his peak in the mid-1920s, Griffith rivaled Chaplin, Keaton, and Lloyd as one of Hollywood's top laugh-getters.

Both make a great double bill, and that's what we're running on Sunday, Nov. 27 at 4:30 p.m. at the Wilton Town Hall Theatre in Wilton, N.H.

So burn off those extra holiday calories by joining in a great aerobic exercise: communal laughter.

Here's info about Griffith and the two films in the form of a press release that never got sent out. Told you I'm behind!

Hope to see you there. Raymond Griffith and Betty Compson in 'Paths To Paradise' (1925)

WILTON, N.H.—He was a silent film actor who really couldn't talk, thanks to a childhood vocal injury. He was Raymond Griffith, the "Silk Hat" comedian, whose film star popularity in the 1920s rivaled that of Charlie Chaplin and Buster Keaton. But Griffith's lack of a speaking voice prompted an abrupt end to his on-screen career when talkies arrived in 1929. Most of his starring feature films have since disappeared, causing Griffith to be virtual unknown today.

But the elegantly dressed comic, who as a youngster attended St. Anselm Prep School in Goffstown, N.H., will return to the cinematic spotlight once again on Saturday, Nov. 26 with a double feature of two of his surviving works. 'Paths to Paradise' (1925) and 'Hands Up!' (1926), a pair of comedies regarded as his best, will be screened with live music on Sunday, Nov. 27 at 4:30 p.m. at the Wilton Town Hall Theatre, 40 Main St., Wilton, N.H. Admission is free, with a suggested donation of $5 per person.

"Griffith's character was that of a worldly, shrewd, and quick-thinking gentleman, usually dressed in a top hat and a cape, who enjoyed outwitting con artists and crooks at their own game," said Jeff Rapsis, a New Hampshire-based silent film musician who will improvise scores for both films. "It turns out he was very different from Chaplin or Keaton, and so were his films—they seem a bit more cynical and so perhaps more modern. But we've shown them before and they hold up well with a live audience today."

'Paths to Paradise' (1925) stars Griffith as a polished con man who competes with a feisty female jewel thief to steal a heavily guarded diamond necklace. The film finishes with a wild car chase through the California desert. Unfortunately, all existing prints of 'Paths to Paradise' are missing the final 10 minutes, but the film ends at a point that completes the plot and provides a satisfying finish. 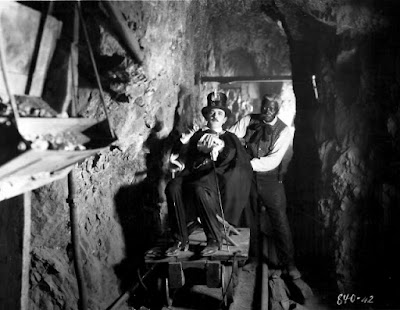 Raymond Griffith rides a different kind of underground railroad in the Civil War comedy 'Hands Up!' (1926).

'Hands Up!' (1926) features Griffith as a Confederate spy during the Civil War whose mission is to prevent a shipment of gold from reaching Northern forces. The film survives complete, and is considered by most critics to be Griffith's masterpiece. Both films were produced and released by Paramount Pictures, where Griffith was under contract in the 1920s as one of the studio's leading stars.

"All of these films were designed to be seen in theaters by large audiences, not on a small television screen by people sitting at home," said Rapsis, who provides music for the Flying Monkey's monthly silent film series, which aims to honor the recently renovated venue's historic roots as a local moviehouse.. "In showing silent films, the Flying Monkey aims to recreate the lost magic of early cinema comedy by bringing together crucial elements for its success—the best available prints, projection on the big screen, a live audience, and, in the case of silent films, live music."

Born in Boston in 1895, Griffith injured his vocal cords at an early age, rendering him unable to speak above the level of a hoarse whisper. After appearing in circuses and attending at least one year (1905-06) at St. Anselm Preparatory School in Goffstown, N.H., he went on to serve in the U.S. Navy prior to World War I and in 1915 wound up in Hollywood, where the movie business was already booming.

Early on, Griffith worked at Mack Sennett's Keystone studio, where he developed a reputation as an excellent actor and a superb comedy writer and director. He eventually gravitated to behind-the-camera duties, serving as Sennett's right-hand man for a time. He eventually moved to the then-new Paramount studios in the early 1920s, where he began to appear again in on-camera roles. 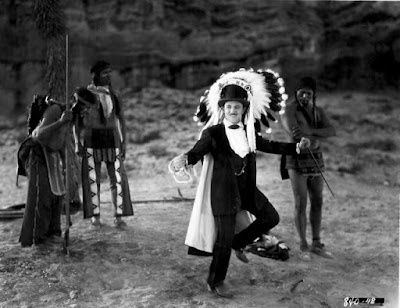 Griffith's mastery of character parts made him immediately popular, prompting Paramount to star him in his own movies starting in 1924. In the next few years, he completed a dozen feature films, most of which today are lost due to neglect or improper storage. If not cared for properly, older film stock will decompose and sometimes burst into flames. About 80 percent of all silent film is presumed lost due to this and other factors.

"Though he's not as well known today as Charlie Chaplin or Douglas Fairbanks Sr., Raymond Griffith was doing some really good work during the peak of his career," Rapsis said. "It's great that the public will get a chance to appreciate the two wonderful Griffith films as part of the Town Hall Theatre's silent film series."

"This is one buried treasure that deserves a wider audience. Griffith is thoroughly ingratiating; it's a pity that so many of his movies have disappeared and the survivors are so seldom revived." —Amazon.com