Amazing poster from Aeronaut Brewing Co., plus reunited with a mislaid brass bell

Look what I came across: 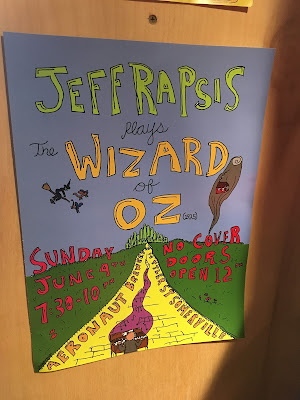 I can't say how delighted I was to find this poster at last night's 'Wizard of Oz' screening at the Aeronaut Brewing Co. in Somerville, Mass.

Thanks so much to whoever did this!

In other good news, last night I was reunited with my bell! 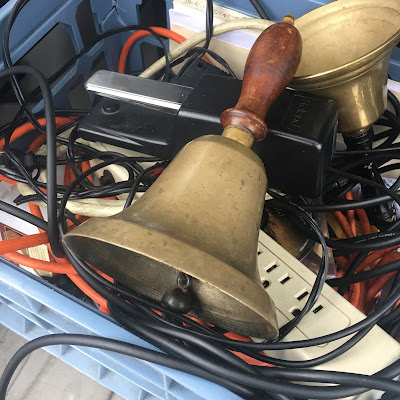 Not just any bell, but a brass school bell that once belonged to my grandmother.

For a few years now, I've brought it along with me for use in silent film accompaniment at appropriate times.

A few months ago, however, I noticed it was not in my crate of traveling gear—and, actually, was nowhere to be found!

I had just returned from a road-trip to gigs in Ohio, so I called around, thinking I'd somehow left it behind. No dice.

This was a real loss because not only was it a family heirloom, it was a darned good piece of accompaniment hardware.

Not all bells are created equal, and this one had a particularly brassy, clangy sound that I came to regard as indispensable for certain moments.

Example: the flashback near the beginning of Fritz Lang's space opera 'Woman in the Moon' (1929), when a professor frantically rings a bell to quiet a rowdy debate that's spiralling out of control. The bell (and the whistle that's also blown) really get the score off to a rousing start.

Another example: a key moment in the climax of Josef von Sternberg's 'The Last Command' (1928) when a handbell is rung as a signal during a battle. It occurs at just the right time when we need a break from big revolutionary war battle music.

After giving it up for lost, I trolled eBay for a replacement bell, finding one pretty easily.

It arrived shortly after, but I couldn't bring myself to open the package. It sat in our dining room for weeks, as I was still mourning the loss of my grandmother's bell.

Weird how I finally opened it this weekend in advance of the Aeronaut show, as we often use a bell to quell the noisy crowd when starting a silent film show.

I tried it. Clang! Nice, but lighter and more polite—nothing like my grandmother's old bell.

And then, just before last night's show, the Aeronaut staffer went to get their own bell, and found two of them—one being the bell I'd mislaid month ago, apparently right there!

Now, if we could only find a cure for cancer, solve climate change, and find world peace.
Posted by Jeff Rapsis at 7:10 PM