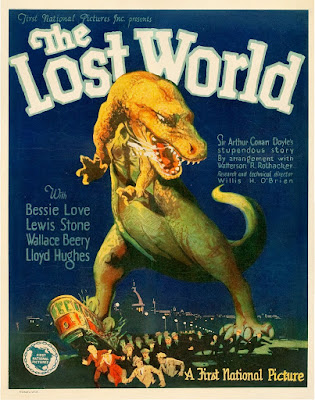 It's 'The Lost World' tonight, and then a new world of Dixieland this coming Sunday!

New to me, anyway, as it's the first time I've collaborated with a Dixieland band in scoring a silent film—or in anything, really!

Be that as it may, it's back to making music after a 4th of July weekend break.

First up is 'The Lost World' (1925), which is running tonight (Thursday, July 6) at the Capitol Theatre in Arlington, Mass.

It's the original 'dinosaur' movie—the one that showed the way for filmmakers all the way through Steven Spielberg's 'Jurassic Park' and beyond.

Showtime is 8 p.m. We've been getting good crowds at the Capitol silent film series, and it's turning out to be a great place to experience silent film the way it was intended: in a theatre, with live music, and with an audience.

And then on Sunday, July 9, the music will take a turn for New Orleans, with a screening of Harold Lloyd's great comedy 'Safety Last' (1923) in 35mm at the Somerville Theatre, 55 Davis Square, Somerville. 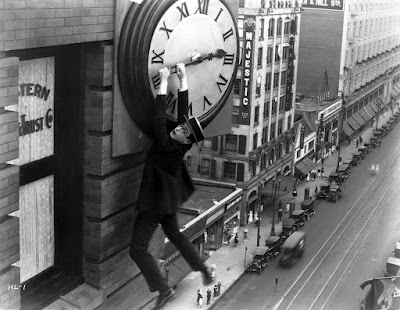 The show starts at 2 p.m. And with me in the pit will be Sammy D and the Late Risers, a local Dixieland ensemble.

I first heard Sammy and the band a few months ago at the Aeronaut Brewery, also in Somerville, when they were jamming prior to one of my Sunday night silent film programs.

I've always had a sweet tooth for the classic Dixieland sound—and for a bunch of guys from New England, they seemed to come pretty close!

If you'd like to get a sense of their sound, here's a clip of them in action. It's wild, uninhibited stuff and really effective in live performance.

(For our show, we're using trumpet, clarinet, banjo, bass tuba and drums. (Plus me on keyboard, as appropriate.)

And as I listened, it occurred to me that 'Safety Last' was coming up at the Somerville Theatre, and I was looking for a different approach, as we'd run the title a few years ago.

I also remembered seeing 'Safety Last' more than 10 years ago at a Boston area venue that will remain nameless.

The print had arrived unexpectedly without a recorded soundtrack, and so the theater's solution was to play a CD of Scott Joplin piano rags.

There's nothing wrong with Scott Joplin. And 'Safety Last' is one of the great thrill rides of cinema—even today the climax can be a nail-biting and nerve-wracking emotional roller coaster.

But two great things don't always go together. And in this case, I was struck how the steady, measured ragtime beat of Joplin's rags totally flattened the film!

Rather than amp up the excitement, the music removed all the peaks and valleys, leaving it a cinematic flat tire.

Wow! That was one of the reasons I began doing music for film—because, I reasoned, even I could do a better job, and something like that should never be allowed to happen to one of the cinema's great treasures.

So how to integrate a Dixieland group into the score? Carefully!

To that end, Sammy (full name Sammy Dechenne) and I have worked out a cue sheet that identifies when and where his group will play, and what kind of music will work. And in some places, I'll take over with just keyboard.

I think we've come up with an effective balance, and also a plan that will help Lloyd's great film come to life on Sunday afternoon.

Please join us and see what you think! See you on Sunday at the Somerville!
Posted by Jeff Rapsis at 5:33 PM