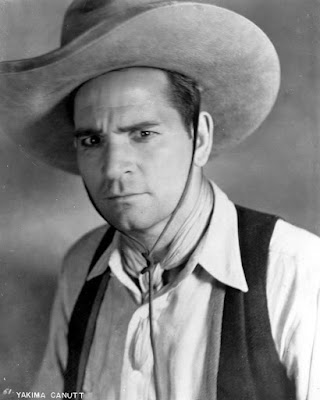 He doubled for Clark Gable during the burning of Atlanta in "Gone With The Wind." He enjoyed a long-time friendship with John Wayne, whom he taught how to fall off a horse.

But long before he became one of Hollywood's legendary stunt men, Yakima Canutt had a career in front of the camera.

During the silent era, "Yak" starred in a series of Westerns that featured his expertise in horsemanship, trick riding, and rodeo skills.

It's the latest installment of our summer-long "Birth of the Western" series. And no series about the origins of Hollywood westerns would be complete without Yakima Canutt.

Both of the films we're showing are classic fare—the kind of fast-paced adventure film that Hollywood was learning to crank out in quantity to keep theaters filled and audiences happy.

It's also an interesting look at a figure who would be influential in years to come.

In his early on-camera days, Canutt was just as daring as anyone, risking life and limb to get just the right shot.


"It was in Branded a Bandit (1924) that his nose was broken in a 12-foot fall from a cliff. The picture was delayed several weeks, and when it resumed, Canutt's close shots were from the side. A plastic surgeon reset the nose, which healed, inspiring Canutt to remark that he thought it looked better."

But later, he used his hard-won experience to stage stunts that were no less spectacular, but which minimized the risks faced by performers.

His long career included work on Golden Age blockbusters such as 'Ben Hur' (1959) and 'El Cid' (1961), and in Walt Disney productions such as 'The Swiss Family Robinson' (1960), one of the most memorable films of my early childhood.

Canutt remained active in the business into his 80s, his last credit being 'Equus' in 1977.

But his influence could still be seen on the big screen. 'Raiders of the Lost Ark' (1981), for example, contains a specific tribute to Canutt's work.


It was while working on Mascot serials that Canutt practiced and perfected his most famous stunts, including the drop from a stagecoach that he would employ in John Ford's 1939 Stagecoach. That famous stunt in Stagecoach was filmed near Chimney Rock on Rabbit Dry Lake, west of Lucerne Valley, California. He first did it in Riders of the Dawn in 1937 while doubling for Jack Randall.[2] In his 1981 film Raiders of the Lost Ark, Steven Spielberg paid homage to Canutt, recreating the stunt when stuntman Terry Leonard (doubling for Harrison Ford) 'dropped' from the front of a German transport truck, was dragged underneath (along a prepared trench) and then climbed up the back and round to the front again.

But he'll return to the silver screen on Sunday with two of his starring pictures. See you there—and get ready to cheer on 'Yak' as he rides to the rescue!
Posted by Jeff Rapsis at 4:20 PM