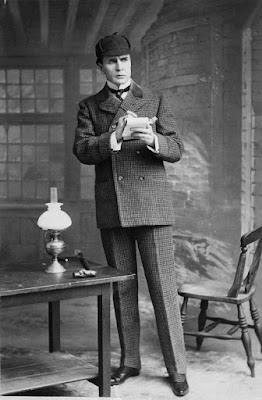 As a teenager, I read Walter Kerr's great book 'The Silent Clowns,' in which Mr. Kerr suggested it was getting very late for any missing silent film to turn up.

That was in 1975. Thankfully, his assessment hasn't been quite on the mark, as significant lost films continue to be rediscovered even now, two generations later.

Recent finds include the complete final reel of Laurel & Hardy's pie fight comedy 'Battle of the Century' (1927), and troves of U.S. films found in archives ranging from Amsterdam to New Zealand.

Even in my little corner of the world (New Hampshire, U.S.A.), we've seen discoveries that include the only known copy of Mary Pickford's first credited appearance in 'Their First Misunderstanding,' a 1911 one-reeler.

But the most impressive re-emergence in recent times, I think, is a long-lost movie that turned up complete in 2014 in the Cinémathèque Français. 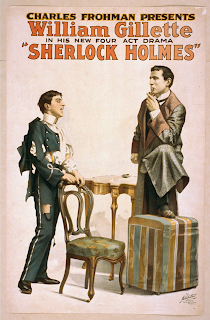 It's the original film version of 'Sherlock Holmes' (1916), produced by Essanay in Chicago and starring noted actor William Gillette, who originated the iconic role on stage. (That's a poster for the stage production at left.)

For nearly a century, not a trace of this film was known to exist. But since it was found complete among other Holmes-related materials in the Cinematheque's archives, it's since been restored and can now be seen for the first time since Warren G. Harding was in the White House.

I had the honor (and the pleasure) of accompanying the restoration last year up at Northeast Historic Film in Bucksport, Me., where it earned a huge ovation.

And now it's time for the Boston-area premiere, which will take place this weekend: on Sunday, Sept. 10 at 2 p.m. at the Somerville Theatre, Davis Square, Somerville, Mass.

It's notable in part because it's the only film appearance of Gillette, an immensely popular (and influential) actor man of the theater for several decades on either side of 1900.

In creating 'Sherlock Holmes' for the stage, Gillette collaborated with author Arthur Conan Doyle (often by telegram from America to England) to develop the script and portray the character.

And he then went on to star as 'Sherlock Holmes' for more than three decades, racking up more than 1,300 performances in the U.S. and Europe. 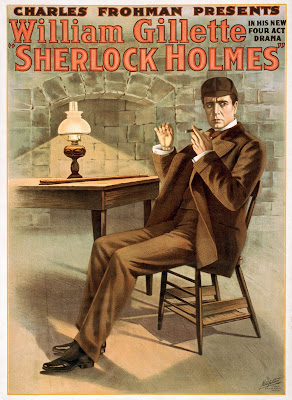 Another poster for the stage production of 'Sherlock.'

In doing so, Gillette set the template for all actors who would portray Holmes from then on, from Basil Rathbone right down to Benedict Cumberbatch.

Alas, Gillette was one of those stage actors who remained loyal to the theater, never getting involved with what was known as the "flickers" early on.

So, with Gillette's only filmed appearance missing from the record, Holmes scholars and fans had no real sense of the actor's crucial contribution to the ever-growing Holmes legend and industry.

See for yourself where the adventures of Sherlock Holmes started for so many: with William Gillette's portrayal of the iconic detective.

Along the way, you'll meet the original Dr. Watson, and many other characters, including the eternal Holmes nemesis, Professor Moriarty.

And I'm pleased to say that we'll be showing the restored 'Sherlock' via a newly struck 35mm print, which at first wasn't going to be produced.

Rob Byrne of the San Francisco Silent Film Festival, who led the restoration effort, told me two years ago that 'Sherlock' would only be available via DCP, the digital cinema format.

Well, something changed, as there's a 35mm print of 'Sherlock' at the Somerville Theatre right now, in the capable hands of projectionist David Kornfeld. Yay!

So please join us. The restored 'Sherlock Holmes' will entertain and beguile you. It might also stir hope that yet more missing films will reappear, and even inspire you to look.

Anyone have a copy of 'London After Midnight' (1927) in their basement?

Here's the press release that went out, with more info about the film and the screening. See you there! 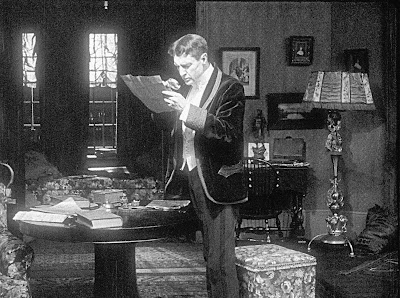 SOMERVILLE, Mass.—The first-ever movie adaptation of 'Sherlock Holmes,' a silent film released in 1916 and recently rediscovered, will screen in September at the Somerville Theatre.

The original 'Sherlock Holmes' will be shown in 35mm with live music on Sunday, Sept. 10 at 2 p.m. at the Somerville Theatre, 55 Davis Square, Somerville, Mass.

Admission is $15 per person/$12 students and seniors.

Like many films from the silent era, the original 'Sherlock Holmes' movie was long considered completely lost until a nearly complete copy was discovered in 2014 at the Cinemathique Francaise in Paris.

The film has since been restored, allowing movie-goers to again see the only screen appearance of legendary stage actor William Gillette in his most famous role.

Gillette originated the role of Sherlock Holmes in a popular stage adaptation, collaborating with writer Arthur Conan Doyle to create the script and flesh out the character.

Gillette performed as the brilliant Holmes more than 1,300 times over three decades, touring the U.S. and Europe and popularizing Conan Doyle's sleuth.

A highly regarded stage actor, Gillette made no other known movie appearances.

But his interpretation of the Holmes character laid the groundwork for all actors who would later play the role, from Basil Rathbone to Benedict Cumberbatch.

Set in Victorian-era London, the original 'Sherlock Holmes' movie is an episodic crime drama that incorporates the plots of several Conan Doyle tales.

The restoration was premiered at the San Francisco Silent Film Festival. The screening at the Somerville Theatre will be the first time the restoration has been shown in the Boston area.

"We're proud to be one of the few venues using the 35mm print of the restoration that's recently been made available," said Ian Judge, the Somerville Theatre's general manager. "We remain committed to showing classic film on actual film whenever possible, and we're thrilled to bring 'Sherlock' to Boston in the traditional 35mm format."

'Sherlock Holmes' will be shown with live musical accompaniment by Jeff Rapsis, a New Hampshire-based performer regarded as one of the nation's leading silent film musicians.

The original ‘Sherlock Holmes' (1916), starring William Gillette in the title role, will be shown in 35mm with live music on Sunday, Sept. 10 at 2 p.m. at the Somerville Theater, 55 Davis Square, Somerville, Mass. Admission is $15 adults, $12 students/seniors; general admission seating. For more information, call (617) 625-5700 or visit www.somervilletheatre.com. For more info on the music, visit www.jeffrapsis.com.
Posted by Jeff Rapsis at 12:42 PM