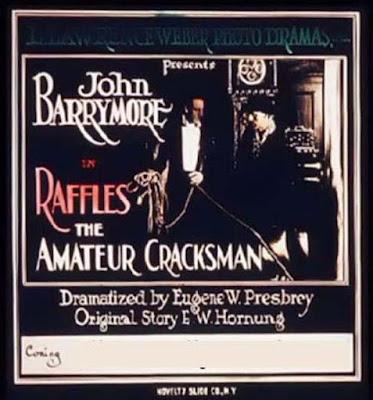 The four-day schedule of film screenings included a good numbers of silents, which I was on hand to accompany.

Most were shown via 16mm collector prints, all of which looked really sharp. (Just one title was unavailable on film: Gloria Swanson's 'Zaza' (1923), recently reissued in DVD/Bluray by Kino-Lorber.)

Best of all, however, was the chance to catch up with so many people in the vintage film community. Attendees this time around included Cynthia Cozart, wife of film restoration expert James Cozart, who recently passed away.

And Gerry Orlando, longtime organizer of Cinefest down the road in Syracuse, N.Y., stopped in for a visit!

But as sometimes happens, 'Raffles' turned out to be really entertaining, with Barrymore in fine form playing cat and mouse with a hard-nosed detective. A lot of fun!

Also of interest was an original Kodascope print of 'The Lost World' (1925), the legendary "dinosaur" film adapted from Sir Arthur Conan Doyle's story.

The print looked fantastic: sharp and clear with great tonal values and really easy on the eyes.

But most interesting to me was how the film was abridged. Like many Kodascope prints made for the home market, it was cut down.

In its original release, 'The Lost World' ran 106 minutes. But the Kodascope version clocks in at just 55 minutes.

I'm familiar with 'Lost World' restorations that have tried to be as complete as possible, but had never encountered the Kodascope edition. So prior to the screening, I told audience members to expect what amounts to a "dinosaur highlight reel."

And so it was! The basic plot was followed, but most of the character development was excised so the film could get straight to the dinosaur scenes.

It still got a great reaction, which was nice. But I found it hard to accompany because I would be setting up for one scene that I expected, but then the film would suddenly jump way ahead!

It was like trying to dance to a record that keeps skipping.

(Does anyone play records anymore? How many people watch 16mm film, for that matter?) 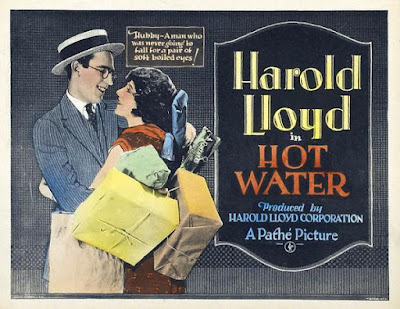 A personal highlight was 'Hot Water' (1924), the only Harold Lloyd silent feature film that I'd never had a chance to accompany live.

Really! I've done all the others, some many times. I've even accompanied the rare silent version of 'Welcome Danger' (1929), which Lloyd reshot and released as a talkie.

So with 'Hot Water,' I could say I was hitting for the cycle.

And what's odd about that is that 'Hot Water' was actually the very first Lloyd feature I ever got to see, although in truncated form.

That's because I was first exposed to the Lloyd features via the Time-Life 1970s re-edits of the films, which ran on PBS when I was a teenager.

As a prelude to 'Safety Last' (1923), the producers used an extended excerpt from 'Hot Water.' So when I tuned in to see Lloyd's famous building climb in 'Safety Last,' I first got a good dose of 'Hot Water.'

It's a good comedy, but generally regarded as one of Lloyd's lesser efforts. As such, it almost never gets shown. And over the years, I've wound up accompanying all the Lloyds except this one.

Well, that changed at this year's N.Y. Film Expo, where I created music for it as 'Hot Water' (via another sparkling 16mm print) drew big laughs.

The latter was recently brought out on DVD/Bluray by Kino-Lorber with a recorded score by me. So it was a special privilege to recreate the music live at this year's N.Y. Film Expo.

Response was gratifying and I received many nice comments afterwards.

So thanks to organizer Alex Bartosh and everyone associated with the N.Y. Film Expo.

Nice to see a lot of familiar faces, and looking forward to the next edition of the event, which is set for Labor Day Weekend 2018!
Posted by Jeff Rapsis at 12:05 AM