A mad dash of silent film accompaniment, plus working Curly Howard into a press release 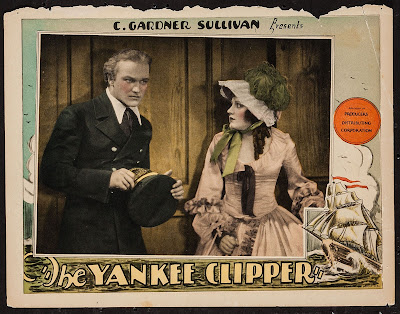 Tonight at the Leavitt Theatre in Ogunquit, Maine: tall ships on the big screen!

Happy 4th of July! A few notes before breaking into a silent film accompaniment sprint in the next week: five performances prior to departing for Laos and Cambodia.

The mad musical dash begins today with a screening of 'The Yankee Clipper' (1927) at the venerable Leavitt Theatre in downtown Ogunquit, Maine.

Looking forward to this (showtime 7 p.m.) because the old all-wood Leavitt Theatre sort of reminds me of one of those old all-wood tall ships. They're both grand contraptions from another era.

Also, Ogunquit is on the Maine coast, which means it'll be about 20 degrees cooler than inland New Hampshire today.

We're enduring a week-long heat wave in New England, which may be good training for Laos and Cambodia (and for global warming in general) but that doesn't make it pleasant.

Even at 7 p.m., temps were stuck near 100 and the air was not moving. It was like bicyling through a giant oven. So Ogunquit will be a relief, I hope.

Plus, I'm going out a bit early to avoid traffic, and also to make a pilgrimage to what I consider the finest run-down clam shack on the East Coast.

(Everyone knows that the best fried seafood comes from run-down shacks within view of the Atlantic—the more run-down, the better. I think it's the same dynamic at work as not ever cleaning a frying pan but letting it become "seasoned" over time.)

It's Ceal's Clam Shack in Seabrook, N.H. Open only from Memorial Day to Labor Day, it's my Holy Shrine of Fried Food I Should Not Eat. But once or twice a year, I don't care. 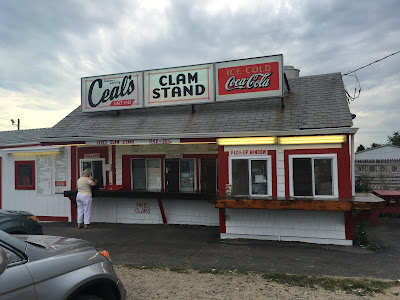 A view from 2016. They update the painted date every season.

And about tonight's screening: I think 'Yankee Clipper' is a great choice to celebrate Independence Day, and not because it has 'Yankee' in the title.

Rather, it depicts a time when the young United States was first making waves on the world stage: specifically, the lucrative China tea trade in the 1850s.

So it harks back to a time long past, which makes it easy to forget today's troubles and relive the good old days, with their slavery and disease and cruelty and...wait, never mind.

Still, it's a great flick because it stars leading man William Boyd (long before he aged into the "Hop-along Cassidy sidekick role in innumerable Westerns) and, most importantly, it'll get out before the Ogunquit fireworks start.

See you there tonight! 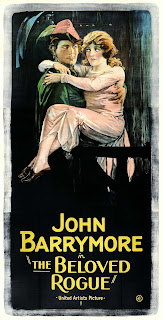 Then tomorrow night it's John Barrymore in 'The Beloved Rogue' (1927), a film well-suited for heat wave relief because it's set in mid-winter medieval Paris.

It's running on Thursday, July 5 at 8 p.m. at the Capitol Theatre in Arlington, Mass. More details in the press release below.

But this is an under-rated picture with great performances from Barrymore, Conrad Veidt, and Marceline Day. Worth checking it out as a kind of pre-Bastille Day experience.

More on these two programs a bit later this week, but both are really worth catching.

And then I cross the finish line on Wednesday, July 11 with a screening of 'Peter Pan' (1924) at the Groton (Mass.) Public Library, a new venue for me. Looking forward to this one, too!

Then it's throw the toothbrush and malaria tablets in a bag, and off we go!

For now, though, consider taking in William Boyd tonight in 'The Yankee Clipper' (1927) tonight at the Leavitt Theatre in Ogunquit, and John Barrymore in 'The Beloved Rogue' tomorrow night at the Capitol in Arlington.

A press release for the latter is pasted in below. And I'm particularly proud of this one, as I was able to work in references to beloved stooge Curly Howard. (They're both beloved rogues of a sort.) Check it out! 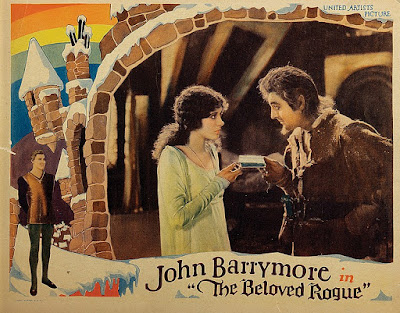 Forget the heat wave and lose yourself in frozen mid-winter Paris courtesy 'The Beloved Rogue.'

ARLINGTON, Mass.—See Drew Barrymore's grandfather in one of his most celebrated performances!

It's legendary actor John Barrymore in 'The Beloved Rogue' (1927), an epic about the exploits of Francois Villon, the legendary "poet, pickpocket, patriot" of medieval France. 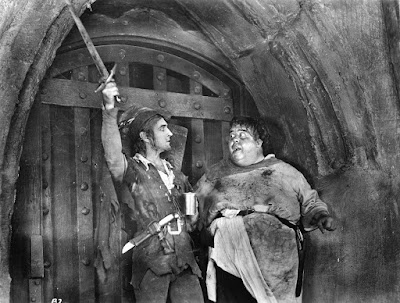 'The Beloved Rogue' follows the life of Francois Villon, beloved by the citizens of medieval Paris but banished from the city by King Louis XI for impudence.

But when the king is threatened by a rival, dark horse Villon emerges as the only hope of winning the day. Can Villon save the monarchy, and also win the hand of the aristocratic Charlotte de Vauxcelles?

In one of his most colorful, energetic performances. Barrymore—known during the silent era as "The Great Profile"—stars as Villon,

Of special note: an appearance by diminutive character actor Angelo Rossitto, a dwarf. 'The Beloved Rogue' was his first film in a long career that spanned all the way to 'Mad Max Beyond Thunderdome' (1985).

Set in a snowbound wintertime Paris, a highlight of 'The Beloved Rogue' are imaginative sets created by legendary art director William Cameron Menzies.

Critics continue to cite 'The Beloved Rogue' as one of Barrymore's strongest performances.

Barrymore was a member of a legendary acting clan that included film actor Lionel Barrymore and stage actress Ethel Barrymore. Among his John Barrymore's descendants are actress Drew Barrymore, his granddaughter. 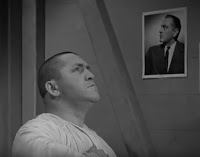 Barrymore's trademark "profile" was immortalized by comic Curly Howard in 'Movie Maniacs' (1936) when he turns sideways to the camera and asks, "Ain't I gettin' to look more and more like Barrymore?"

Produced and released by United Artists, 'The Beloved Rogue' was lost for some 40 years until a copy was discovered in the late 1960s in the collection of film pioneer Mary Pickford.

'The Beloved Rogue' is the latest in a series of monthly silent film screenings at the Capitol Theatre.

The series aims to recreate the lost magic of early cinema by assembling the elements needed for silent film to be seen at its best: superior films in best available prints; projection on the big screen; live musical accompaniment; and an audience. 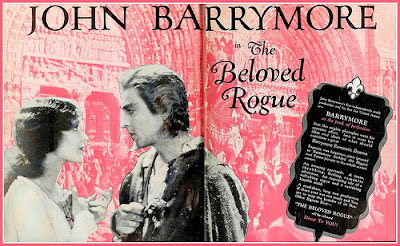