Next up: Summer silent series at the seaside, plus Harvard Magazine silent film music story—and chalk up another great escape for Houdini! 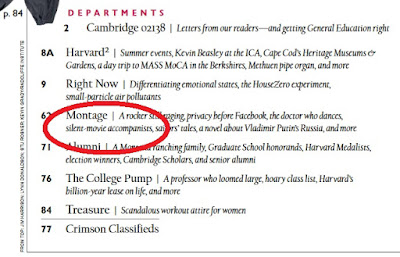 Wow! I finally made it into Harvard! The magazine, that is.

Yes, the current issue of Harvard Magazine includes an in-depth look at the art of silent film accompaniment as practiced at the Harvard Film Archive.

In chronicling the "surprisingly diverse ecosystem" of silent film music, writer Sophia Nguyen was nice enough to include comments by yours truly along with accompanists Robert Humphreville and Martin Marks.

All of us accompany silent film programs at the archive—those on the regular schedule, and sometimes for classes that use silent film in their curriculum.

The story is here.

Me, I'm thrilled to see any attention paid to this little corner of the performing and visual arts.

So thank you, Sophia, for such a great job capturing a slice of this sub-set of the Harvard cultural scene, and serving it so artfully to the magazine's audience. 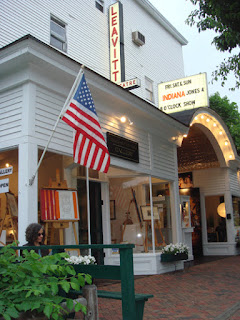 Next up for me: Thursday is opening night at the Leavitt Theatre, a seaside resort moviehouse where films have been shown every summer since 1923.

The fare remains mostly first-run blockbusters. But each summer, the Clayton family brings me in for a series of silent films with live music, both as a novelty and to honor of the theater's roots as a silent moviehouse.

Amazingly, the building remains virtually unchanged since the theater opened in the 1920s. Under each of the wooden seats, you'll find a loop of thick-gauge wire to give gentlemen a place to stow their hats.

For those wondering, yes, the Leavitt did install digital projection a few years ago, although they maintain one of their 35mm projectors in place just in case. 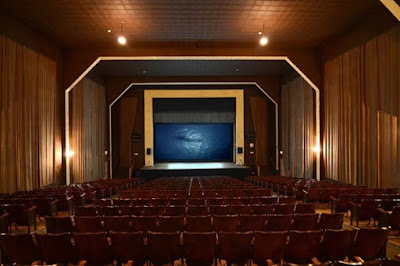 The Leavitt's original 1923 interior, still intact in 2018. The angle doesn't show the steeply-raked floor, which results in near-stadium seating. Notice the proscenium arch is sized for the original silent film 1:1.33 aspect ratio.

Opening night for the 2018 season is Thursday, June 28 with a screening of Buster Keaton's great comedy 'The Navigator' (1924), plus a Buster short or two.

More details about this screening, as well as the rest of the summer's schedule, are in the press release below.

For now: speaking of hats, I wanted to tip mine to Mr. Harry Houdini, who drew an unexpectedly large crowd to the Town Hall Theatre yesterday (Sunday, June 23) for a screening of 'Haldane of the Secret Service,' his 1923 adventure thriller. 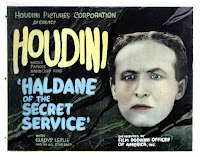 I think the gloomy weather (cloudy, sticky, periodic showers) helped. But in speaking with attendees (and many first-timers), there's no doubt 'Houdini' maintains his magnetism.

It's a continuation, no doubt, of his original appeal.

Consider: our program included newsreel footage of Houdini doing escape routines in various cities—wriggling out of straitjackets while suspended by his feet high above the ground.

Each one was accompanied by shots of enormous numbers of people (all the men wearing hats) gawking at Houdini's exploits. Then and now, the man just knew how to draw a crowd!

About 'Haldane': for me, this was yet another example of previewing a picture and wondering how any audience would be able to follow the action, or take it seriously.

But on the screen and in front of an audience, 'Haldane' came together and came to life! It made total sense, and moments that seemed slow and dull when viewed alone were instead full of edge-of-your-seat suspense.

So chalk up another great escape for Houdini: even when imprisoned by a mediocre film, he managed to break out in triumph!

Hope to see you by the sea in Ogunquit this Thursday. Here's the press release: 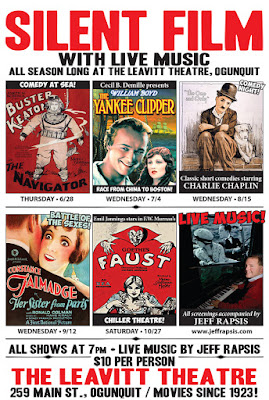 OGUNQUIT, Maine—Classics of the silent film era will return to the big screen starting next month at Ogunquit's Leavitt Theatre, which will host a season of vintage cinema with live music in the historic facility.

The series gives area film fans a chance to see movies from the pioneering days of cinema as they were intended to be shown—on the big screen, with an audience, and accompanied by live music. 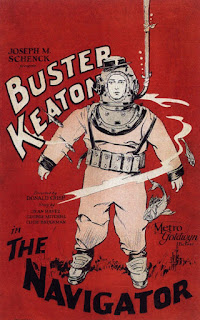 Most screenings will be weeknight evenings and will begin on Thursday, June 28 with 'The Navigator' (1924), a classic silent comedy starring Buster Keaton

The series runs through October, concluding with a Halloween screening of F.W. Murnau's chilling silent version of 'Faust' (1926) on Saturday, Oct. 27.

Admission for each screening is $10 per person.

A total of five programs will be offered in the series. Films will include a program of Charlie Chaplin's great short comedies and "Her Sister From Paris" (1925), a sophisticated romantic comedy starring Ronald Colman and Constance Talmadge.

"These are the films that first made people fall in love with the movies, and we're thrilled to present them again on the big screen," said Max Clayton, the Leavitt's manager. 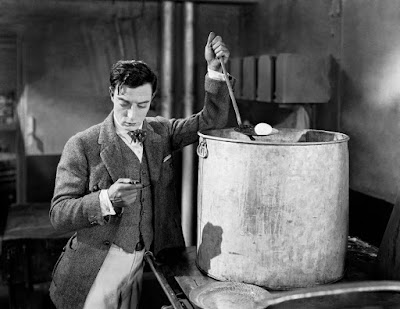 Although Keaton never smiled on camera, his comedies rocked theatres with laugher throughout the 1920s.

In 'The Navigator,' Buster sets sail in a comedy about a spoiled rich couple marooned all alone on a drifting ocean liner.

Keaton, famous for visual humor and mechanical gags, acquired a real ocean liner to create 'The Navigator,' turning the vessel into one of the biggest comedy props in movie history.

The film, a smash hit, helped establish Keaton as one of the major comedians and stars of the silent film era.

Other programs in this year's Leavitt silent film series include:

• Wednesday, Aug. 15, 7 p.m. 'Charlie Chaplin's Best Short Comedies.' A selection of classic short comedy films that helped propel the Little Tramp to worldwide fame and rocked the globe with laughter. See the movies that paved the way for Chaplin to go on to make later masterpieces such as 'The Gold Rush' and 'City Lights.'

• Wednesday, Sept. 12, 7 p.m. 'Her Sister From Paris' (1925) starring Ronald Colman, Constance Talmadge. The scene: Europe. The cast: Rich people. Get swept off your feet by not one but two privileged ladies, both played by amazing actress Constance Talmadge, in this effervescent battle-of-the-sexes comedy.