The problem with ice cream for dinner, plus 'Her Sister' tonight and again Saturday night 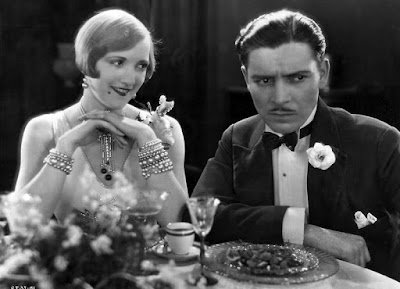 Constance Talmadge and Ronald Colman in 'Her Sister from Paris' (1925), which I'm accompanying tonight (Thursday, Aug. 16) at the Capitol Theatre in Arlington and on Saturday, Aug. 18 in Ludlow, Vt.

Maybe it was the heat. Maybe it's changing tastes. Maybe I did a lousy job with the music.

For whatever reason, a program last night of two-reelers from Chaplin's Mutual period failed produce what I would call an abundance of laughter.

People enjoyed it, I thought, and the applause seemed hearty enough after each film.

But while the comedies were running, little evidence of chortles or guffaws or belly laughs reached my ears.

That's unusual, as the Mutuals are when Chaplin really first hit his stride in a big way, I think. And they're proven laugh-getters.

Last night at the Leavitt Theatre, we ran four: 'Behind the Screen,' 'The Rink,' 'Easy Street' and 'The Cure.'

All are what I would consider crackerjack comedies. They're full of classic Chaplin gags and sequences that produce uproarious laughter. 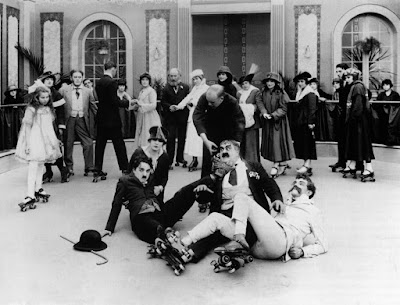 Chaplin and company in 'The Rink.'

So what happened last night? Well, on top of the factors already mentioned, let me add these:

1. We had about 60 people in attendance. And weirdly, everyone sat way in the back of the theater. And the Leavitt now offers a bar and food service up in the "balcony" (actually an area even further back) and a lot of people were up there.

So it might have been the case that me, sitting way down under the stage, wasn't able to hear the laughter. Could be. But I heard enough to know I wasn't hearing enough, if that makes any sense.

2. The "Ice Cream for Dinner" factor. By that I mean it's one thing to watch one 20-minute comedy short. But it's a whole other ballgame when you string four of them together in a row, like cars in a freight train.

Like most short comedies of the period, Chaplin's two-reelers were intended to be just one part of a varied program that would include newsreels, dramas, travelogues, live vaudeville acts, and who-knows-what else.

As such, they functioned quite well, giving audiences a dose of high energy yucks to liven things up. It's a little like how dessert functions as part of a whole meal: a little sweet reward for all the other good stuff we've consumed.

But when you string four comedies together, it's too much. It's like having four ice cream sundaes in a row. After awhile, the appeal can't help but wear thin. 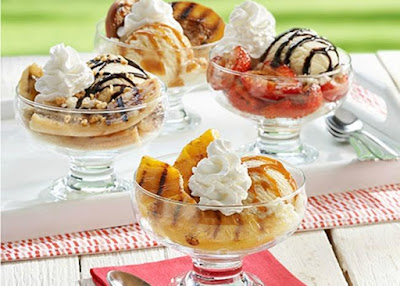 Yes, I've seen cases where comedies are strung together at film conventions, and they do quite well. But film conventions are often for the hard core, and that's a very different audience than the general public that's not familiar with the silent film idiom.

So last night's Great Laughter Draught of 2018 might be the cause of too much comedy all at once. Something to remember when people ask for a "night of Charlie Chaplin" or similar programs.

Well, onward we go. Tonight finds me accompanying the first of two screenings this week of 'Her Sister From Paris' (1925), a comedy starring Ronald Colman and Constance Talmadge.

On Thursday, Aug. 16, it's at the Capitol Theatre in Arlington, Mass. Showtime is 8 p.m. For information about the show, I've pasted in the press release for this screening below.

Then I'll be repeating it on Saturday, Aug. 18 up in Ludlow, Vt., at the Ludlow Auditorium, as this year's "silent film with live music" event, which is always a pleasure to be a part of.

In the meantime, hope to see you at a screening near or far! 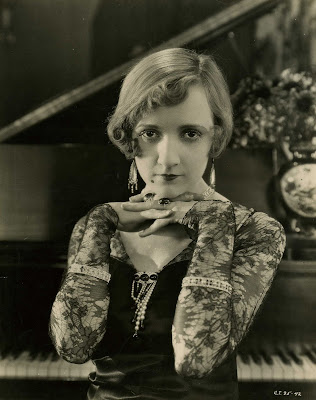 'Her Sister From Paris' on Thursday, Aug. 16 at Arlington's Capitol Theatre

ARLINGTON, Mass.—The scene: Europe. The cast: Rich people. Get swept off your feet by not one but two privileged ladies, both played by amazing actress Constance Talmadge, in this effervescent battle-of-the-sexes comedy.

Silent film with live music returns to the Capitol Theatre, 204 Massachusetts Ave., Arlington, Mass. with the comedy 'Her Sister from Paris' on Thursday, Aug. 16 at 8 p.m.

The special program will be presented with live music by silent film accompanist Jeff Rapsis. Admission is $12 adults, $10 kids and seniors.

In 'Her Sister from Paris,' Ronald Colman and Constance Talmadge play a wealthy American society couple living in Vienna.

Due to an argument, she leaves to stay with her mother. At the railway station she meets her identical twin, a celebrated dancer in Paris (also played by Talmadge), who agrees to trick the husband to help rekindle her sister's marriage.

The fun starts when both the husband and his friend, an official at the British Embassy, fall in love with the sister, leading to a dizzying round of complications.

Among the most popular stars of the silent era, Constance Talmadge specialized in light "society" comedies. However, she had acting and pantomime skills that made her a versatile actress able to tackle any role.

In 'Her Sister From Paris,' Talmadge delivers a virtuoso performance playing both sisters. Although their appearance is identical, each woman is quite different from the other, which Talmadge conveys through body language and on-screen attitude.

Ronald Colman, whose career would go on to span radio and television, was already a popular leading man in films at the time 'Her Sister From Paris' was made. Colman more than holds his own as the two sisters conspire against him. 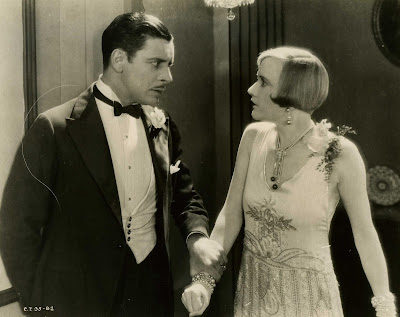 Ronald Colman and Constance Talmadge in 'Her Sister from Paris.'

The screening of 'Her Sister from Paris' provides local audiences the opportunity to experience silent film as it was intended to be shown: on the big screen, in restored prints, with live music, and with an audience.

"If you can put pieces of the experience back together again, it's surprising how these films snap back to life," said Rapsis, a New Hampshire-based silent film accompanist who creates music for silent film screenings at venues around the country.

"By showing the films as they were intended, you can really get a sense of why people first fell in love with the movies."

'Her Sister From Paris' (1925) starring Constance Talmadge and Ronald Colman, will be screened with live music on Thursday, Aug. 16 at 8 p.m. at the Capitol Theatre, 204 Massachusetts Ave., Arlington, Mass.