Why isn't this film more highly regarded? Thoughts on Griffith's 'Hearts of the World' 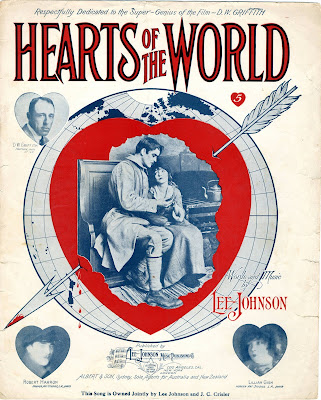 That's the reaction of an audience of about 70 people to 'Hearts of the World' (1918), a seldom-screened D.W. Griffith drama that I accompanied yesterday at the Town Hall Theatre in Wilton, N.H.

The picture really blew our collective socks off. Really! Like Griffith's other pictures fro the same time, it held the screen and then some. And having both Gish sisters, Lillian AND Dorothy, in major roles, didn't hurt.

And an added element of edge-of-your-seat suspense came when I previewed the film just prior to the screening, and the disc we were using (the only one I had) began freezing and pixellating in the climactic final 15 minutes. Youch!

I found I could get it to run in a Blu-ray machine rather than the old DVD player I use in my office, but still... At the theater, we really didn't know if the movie would play all the way through, but it did, adding an extra note of triumph.

So one more time: Wow!

I was wondering if 'Hearts of the World' would work 100 years after its release, and the answer was a resounding YES. It's cut from the same cloth as Griffith's other big melodramas: a story that hooks an audience early, intense emotional confrontations, a thrilling race-to-the-finish climax, and scenes of Lillian Gish losing her mind. 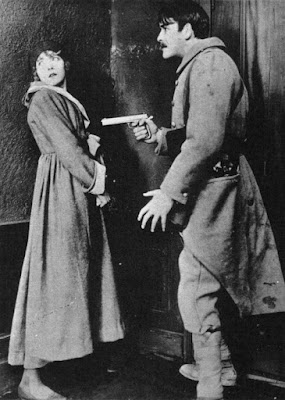 Robert Harron prepares to shoot his sweetheart, Lillian Gish, rather than allow her to fall into the hands of the Huns, in 'Hearts of the World.'

As with most of the early Griffith features, it took time to really get going. But once underway, the two-hour picture (short for Griffith at this time) played like a house afire. Our audience applauded, cheered, and reacted strongly throughout.

So the question is: why isn't this film more highly regarded? Why isn't it better known? Griffith made it right after 'Birth of a Nation' (1915) and Intolerance (1916), and just before 'Broken Blossoms' (1919) and 'Way Down East' (1920), all acknowledged as among his greatest achievements.

I'd have to guess that it's partly due to the reputation of 'Hearts of the World' as a propaganda film. And true, it WAS made at the request of the British government, which allowed Griffith access to the front lines in France. And it's true, the Germans are portrayed as animals, but that's no different from the heavies in other Griffith melodramas.

Also, from what I've read, good and complete prints of the film have been hard to come by. (The version we used, which seemed to be complete, was a transfer of a 16mm print to DVD by Grapevine Video of Phoenix, Ariz.)

But now, a full century after its release, maybe it's time to reassess 'Hearts of the World.' Maybe it's time to move beyond the textbooks (which largely ignore 'Hearts' anyway) and give it credit for being a prime example of Griffith during his peak as an influential director.

I'd never encountered it before. And at yesterday's screening, I asked for a show of hands from those who'd already seen it. Not one!

So to our fresh eyes, the film was able to make a very strong impression. Griffith's knowledge of how to structure a story and manipulate the collective emotions of an audience was very much in evidence.

Also, it was another example of how difficult it is to know how a silent film will play unless you screen it the way it was intended to be shown: in a theater, on a big screen, with live music, and with an audience. 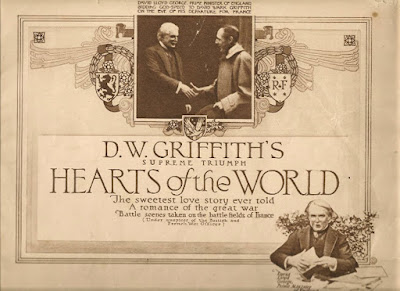 So, rediscovery? Well, not solely on the basis of one very successful screening in a small theater in rural New Hampshire, even though quite a few people came up to afterwards to say how much they enjoyed the experience.

But I have to say, I would say 'Hearts of the World' holds its own against any of the other big Griffith blockbusters of the era. It has all the ingredients in place to pull along an audience with an inevitability not unlike the ice floe in 'Way Down East' that carries Lillian Gish to the waterfall.

If you get a chance to see it in a theater, do so! Just make sure the disc gets checked before the show.

This is my final post of 2018, so let me extend thanks to all whom I've encountered this year in the ongoing adventure of creating live music for screenings of silent films.

Looking forward to a 2019 filled with further discoveries as I continue collaborating with people both dead and alive. (Cue the joke about sometimes not being to tell the difference. Har!)

Even as we move further in time from the era when cinema did not include a recorded soundtrack or dialogue, interest in the films from that time continues to persist, and even seems to be growing.

So thank you to all who play a role in supporting and enjoying the art of silent film with live music.

See you next year!