Going to the dogs: Rin Tin Tin's 'Clash of the Wolves' in Ogunquit on Wednesday, June 23 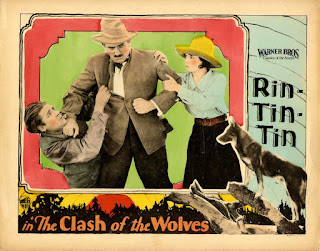 An original lobby card promoting 'Clash of the Wolves' (1925).

That's about all I have time to say about 'Clash of the Wolves' (1925), which is screening this week at the Leavitt Theatre in Ogunquit, Maine with live music by me.

Come see it! Showtime is Wednesday, June 23 at 7 p.m. Lots more info about this crackerjack Rin Tin Tin adventure in the press release below.

But I do need to report that reaction was surprisingly strong to a pair of obscure Westerns that I accompanied on Sunday, June 20 at the Town Hall Theatre in Wilton, N.H.

'Salomy Jane' (1914) and 'The Old Oregon Trail' (1928), two titles for which I'd never played before, were both received enthusiastically by an unexpectedly large on audience.

Our summer series of silent Westerns in Wilton continues on Sunday, July 11 with 'The Covered Wagon' (1923), a Paramount blockbuster that became the top-grossing film of 1923.

I've been saying that these Westerns are so old, they show the actual old West. So it shouldn't be surprising to learn that in making 'The Covered Wagon,' Paramount used actual surviving covered wagons that made the original migrations in the 1840s.

So do the math. The film, made in 1923, depicted life from 80 years earlier. That's the same as a film today set in the era of World War II.

But what's a century between friends?

Okay, here's the info about Rin Tin Tin. See you at the movies! 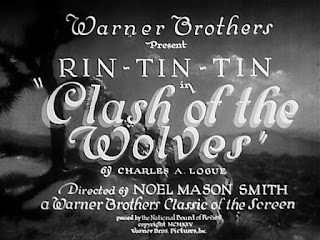 Legendary dog star races to the rescue in 'Clash of the Wolves' silent adventure film, presented with live music

OGUNQUIT, Maine — He couldn't speak. But that was no handicap for a star during the silent film era.

See for yourself on Wednesday, June 23 at 7 p.m., when the Leavitt Theatre screens a vintage Rin Tin Tin silent adventure film with live music.

'Clash of the Wolves' will be shown at the Leavitt Theatre, 259 Main St., Route 1, Ogunquit. Admission $12 per person; tickets available at the door.

The film will be shown with live musical accompaniment by Jeff Rapsis, a New Hampshire-based composer and performer who specializes in scoring silent film.

Rin Tin Tin films were produced by then-struggling Warner Brothers and proved immensely popular around the world, with audiences marveling at the then-new German Shepherd breed's feats of derring-do as he out-smarted his human co-stars.

Rin Tin Tin was so popular, he was named "Best Actor" at the first-ever Academy Awards in 1929 until ceremony officials decided on a re-vote in favor of human performer Emil Jannings.
The Leavitt, a summer-only moviehouse, opened in 1923 at the height of the silent film era, and has been showing movies to summertime visitors for nearly a century.

The silent film series honors the theater's long service as a moviehouse that has entertained generations of Seacoast residents and visitors, in good times and in bad.
To improvise a live musical score for 'Clash of the Wolves,' silent film musician Jeff Rapsis will use a digital synthesizer to recreate the texture of a full orchestra.

"If you're new to the art form of silent film, seeing the Rin Tin Tin pictures in a theater with live music is a terrific way to get acquainted with the enduring power of this kind of movie-making," Rapsis said.

Rin Tin Tin's descendants are still bred, continuing the bloodline to the present day. The ongoing Rin Tin Tin phenomenon inspired a recent book, "Rin Tin Tin: The Life and the Legend" by New Yorker writer Susan Orlean.
Upcoming titles in the Leavitt's silent film series include:
• Wednesday, July 7, 7 p.m.: 'Safety Last' (1923) starring Harold Lloyd. The iconic image of Harold Lloyd dangling from the hands of a downtown clock is only one small piece of a remarkable thrill comedy from 1923  that has lost none of its power over audiences. See it for yourself on the big screen!

• Wednesday, July 21, 7 p.m.: 'Peter Pan' (1924). Celebrate summer with the original silent film adaptation from 1924 of J.M. Barrie's immortal tale of the boy who wouldn't grow up. Join the Darling children as they follow Peter to Never Land to do battle with the evil Captain Hook.

• Wednesday, Aug. 4, 7 p.m.: 'Seven Chances' (1925) starring Buster Keaton. Buster is about to be saved from bankruptcy by an unexpected inheritance of $7 million—but only if he gets married by 7 p.m. that very day. Can Buster somehow find the girl of his dreams while being pursued by an army of women?

• Wednesday, Aug. 18, 7 p.m.: 'Wild Orchids' (1928) starring Greta Garbo. Steamy romantic thriller from 1928. An older man takes his young wife to Java where he plans to invest in tea plantations. Aboard ship, a young man (and member of the island's royal family) resolves to make her acquaintance.

• Saturday, Oct. 30, 7 p.m.: 'Nosferatu' (1922) directed by F.W. Murnau. Just in time for Halloween: the original vampire film, this loose adaptation of the 'Dracula' story just gets weirder and creepier as the years go by. Released in 1922, and complete with timely references to plagues and pandemics
‘Clash of the Wolves' (1925) starring Rin Tin Tin will be shown with live music on Wednesday, June 23 at 7 p.m. at the Leavitt Fine Arts Theatre, 259 Main St., Route 1, Ogunquit. Admission $12 per person; tickets available at the door.
For more info, call (207) 646-3123 or visit www.leavittheatre.com.