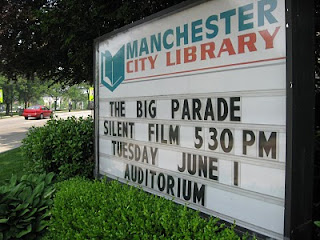 Tomorrow brings a screening of King Vidor's big World War I epic 'The Big Parade' (1925). We're screening it on Tuesday, June 1 at 5:30 p.m. at the Manchester (N.H.) Public Library's handsome Carpenter Auditorium. Though it's in honor of Memorial Day, the weird time/date is because I was planning to be out of town for the actual weekend (which didn't happen) and the library is open only until 8:30 p.m., so we have to start a bit early to get the whole two-and-a-half-hour film in.

I have high hopes for this screening, as the film seems to lend itself to music and we got strong reactions from people when we screened it at the Palace Theatre in 2008. I first saw the picture a few years back at the Kansas Silent Film Festival, and could not believe the scale of this tale: as the film unreeled, it just kept growing and growing in scope.

I think it was a genius move on Vidor's part to set up the story almost in two parts: the first half lets us get to know the guys as real people, and has a surprising amount of humor in it. But this makes it all the more nerve-wracking when, a little more than half-way through the film, they're called up to the front, and the big action begins. The little trap that Vidor set can't help but still snare an audience even today, I think, and it must have really mesmerized people when cinema was new. I keep referring to 'The Big Parade' as the 'Saving Private Ryan' of its time, and it really stands apart as the first film to really take audiences into the realities of battle, trench-warfare style.

So 'The Big Parade' is just as intense as before, and maybe more so. Maybe it's just a sign of how times have changed, but seeing Karl Dane's character constantly chew tobacco and spit the juice out everywhere is now equally blood-curdling.

As for music, I have some good stuff, I think, including a nicely flowing romantic melody with a lot of little pieces to it that will help glue everything together. I'm using a few classic army tunes as well ('You're in the Army Now' appears in the film, so that's that) and a few things I made up. And I better not get La Marseillaise wrong, as Manchester is still very much a French town, at least in terms of heritage.

A word or two about the screening: it's to benefit a fund to help repair vandalism to the city's recently dedicated World War II Memorial. I know, 'The Big Parade' is about World War I, but there aren't many silent films about World War II, so what are you going to do?

I wish all a peaceful and reflective Memorial Day, and hope to see you at tomorrow's screening!
Posted by Jeff Rapsis at 1:51 PM