Report from 'Greed' at Palace Theatre

Our final film of the 2009-10 season at the Palace Theatre in Manchester, N.H. was the 140-minute version of 'Greed' (1924), and it seemed only appropriate that a film legendary for difficulties would produce unexpected technical headaches for us. The Palace, in the midst of a multi-week run of 'The Full Monty' stage musical, had its house projector set up in place, so we had to use it instead of our own. We've done this before, no problem—except this evening, the Palace DVD player produced an image off our discs that did not render in the correct aspect ratio. The only solution to this was to have my wife drive into Manchester with an alternate DVD player that, thankfully, sent the correct image to the projector, so we started only about 20 minutes late. 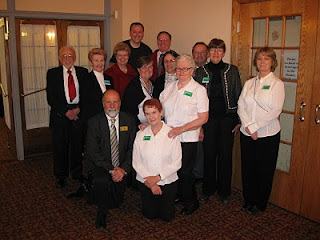 As it was the last film of the season, we marked the occasion by taking a photo of me with the group of volunteer ushers, who turn out in large numbers at every Palace screening. Two even dress up in thick red coats to welcome patrons by opening the lobby's big front doors, which is a nice touch. These folks donate their time to make sure everything runs smoothly, and also encourage audience members to fill out comment cards after the lights come up. The ushers are a wonderful part of our support network here and it wouldn't be the same without them!

Dave Stevenson and I were surprised at the turnout, which seemed pretty good for a Monday night screening of a tough drama. About 75 people were on hand for the film, and they were very patient waiting for us to solve the projection issue. The film seemed to hold their attention, with steady reaction happening throughout.

For the music, I used a 'small ensemble' string setting for the entire movie, bumping up the level gradually until the desert climax is reached. I think this helped it all hold together, and was in keeping with director Von Stroheim's vision of the film and life in general, which seems big on restrictions and limitations. But the strings have such a rich variety of tones, from grumbling low notes to piercing sounds in the upper register, that I never felt I was limited in expressive ability.

In taking this route, I kept thinking of what Bernard Herrmann did with the score to Hitchcock's 'Psycho.' Hitch, after many rich full-color extravaganzas in the 1950s, decided to shoot 'Psycho' in black and white, and so Herrmann chose to compose a "black and white" score—all strings and devoid of any distracting colors. I think this approach really helps tighten the intensity of the drama, though of course the actual music itself makes a big difference, too. Anyway, it seemed a logical approach to lend some shape and form to my efforts to 'Greed.'

(By the way, in 'Greed' the only exception to the "all strings" approach was when the sister is seen playing the organ at the wedding, a scene that's intercut with images of a funeral passing in the street below; I had fun mixing together the traditional wedding and funeral marches as we slid around from key to key.)

I came up with a nice suite of melodic material for this film, I thought: a somewhat stern Beethoven-like main theme for McTeague, a slow tune in 12/8 with shifting major and minor harmonies that helped bring out slowly creeping lunacy; a little chromatic signature that worked really well in the deep bass underneath sustained dissonances in the treble; and my favorite, a dirge-like "eating melody" for when the family pigs out at the wedding (which brought some of the rare laughter we got), and which returned in other depictions of excess; and a whole tone signature for the caged bird images that play a role throughout 'Greed.'

Overall, sometimes I'm in the zone and sometimes I'm not, but I have to say that at this evening's screening of 'Greed,' I came up with a number of moments that seemed to flow especially fluently. So it was a satisfying night for me, and it felt good when I landed on that big unison E (for Erich!) and held it until the final fadeout.
Posted by Jeff Rapsis at 11:06 PM