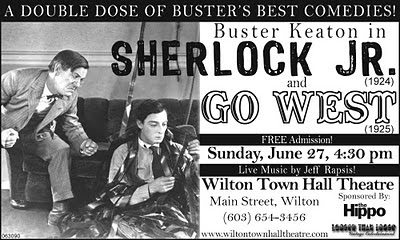 A double dose of Buster Keaton kicks off a summer silent comedy series at the Wilton (N.H.) Town Hall Theater. For this screening, we've got two of Buster's best: 'Sherlock Jr.' (1924) and 'Go West' (1925), two features that we haven't screened before.

I think this will be a fun pairing because although both films are great Keatons, they're quite different. 'Sherlock Jr.' is a gag-filled fast-paced detective story (and short, too—less than 50 minutes), while 'Go West' flows at a more leisurely pace, I think, and is different in that it's Keaton's attempt to bring a bit of pathos to his stone-faced silent film character.

What would be really interesting would be to pair Chaplin's 'The Gold Rush' (1925) with 'Go West,' to show how Chaplin incorporated pathos seriously while Keaton (who was making 'Go West' when 'The Gold Rush' was in release and sweeping the nation) actually parodied it. But the Chaplin estate won't allow 'Gold Rush' to be screened for reasonable terms, so sorry.

Musically, the challenge will be to create two separate worlds for these films, which take place in very different places. The issue of "place" is interesting in 'Sherlock Jr.' because a large chunk of the film takes place as a movie within a movie, which provides a great opportunity for music to underscore this transformation, and also reinforce the return to reality afterwards. Both approaches can be interwoven for the finish, which is one of the great laugh-producing endings in all of silent film, I think.

'Go West' is an outdoorsy film, and so I'll do my best to bring that sense to the music. Besides the locale, though, the film follows a personal story line for Buster, and so the music that we start with (before he actually gets out west for the bulk of the film) should ideally have within it the seeds of his later transformation. Fine-sounding theories, so we'll see what happens in the theatre.

After accompanying films for awhile now, I have a stockpile of themes I can draw upon to make a movie come to life without having to create something new, if I don't have an opportunity. But both of these films really demand their own music, I think, so I'm working up some melodic material for each. Hope to see you in Wilton on Sunday, June 27 at 4:30 p.m.

Also, we'll be testing new speakers that my colleague Dave Stevenson picked up recently. My current speakers are beginning to sound a bit stressed, especially after last January's take-no-prisoners score to 'The Black Pirate' in Wilton. I'm working on getting new ones that allow the full range of the mighty Korg synthesizer to come across without distortion, and this is one step in that process.
Posted by Jeff Rapsis at 9:49 AM