I'm thrilled to announce that starting in August, we're running a monthly silent film series at the newly restored "Flying Monkey Theatre" in Plymouth, N.H. The series will be similar to what we're doing at the Wilton Town Hall Theatre: once a month (on the second Thursday night), we'll screen a program of great silent films as they were meant to be seen: one the big screen, in good prints, with live music, and with an audience!

The former "Plymouth Theatre" for many years was a first-run moviehouse in the college town that's home to Plymouth State University. After closing last year, the building was purchased at auction by Alex Ray, owner of the successful Common Man family of restaurants here in New Hampshire. Alex has an interest in rehabbing historic urban structures, most recently transforming an abandoned mill building into a showpiece Common Man restaurant and inn in Claremont, N.H. Now, with the Flying Monkey, he's turning his attention to creating a community gathering place capable of hosting all manner of music, events, and, of course, movies. 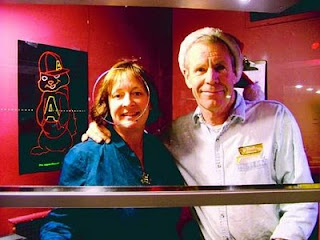 To that end, he's hired Lisa Lovett (that's Lisa and Alex in the photo, taken by local journalist Roger Amsden), who's been busy booking acts while Alex and his crew have been busy totally rehabbing the theater. Really! I stopped by about a month ago and the building's interior was in the process of being completely gutted. But the blueprints (available here) show an ambitious plan for a wonderful 400-seat theater that combines the building's historic past with modern amenities. If what he's done in the past is any indication, Alex will have the place in great shape by opening night, which is July 23. For more info, see the Flying Monkey portion of the Common Man's Web site.

(The 'Flying Monkey' name, by the way, came from Alex Ray's performance in that role in a local theater production of the 'The Wizard of Oz,' one in which Lovett played the Wicked Witch. Talented people we got here in New Hampshire!)

I was impressed with what I heard of this project, so I approached Lisa about including a monthly series of silent films as a gesture to the roots of the "Flying Monkey" as a moviehouse, and she welcomed the idea. So we're opening on Thursday, Aug. 12 at 7:30 p.m. with "Grandma's Boy" (1922), Harold Lloyd's classic coming-of-age tale and one that seems to never fail with an audience. After that, we'll continue with a few comedy programs as the new semester starts (including Keaton's 'College' (1927) in September) and then vary things with a few dramas and other kinds of films.

More about this series as it develops, but I look forward to working with Lisa on building an audience for this unique art form, especially in a college town. And thanks are due again to Alex Ray for his vision and willingness to take on tough projects that help bring back worthy buildings around our state and restore them with respect to their former glory, which sure beats having them become parking lots.
Posted by Jeff Rapsis at 12:25 PM