Report: 'When Lincoln Paid' on June 2 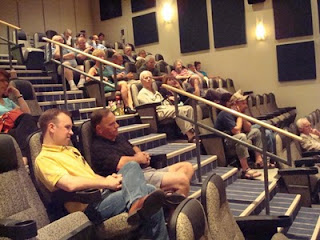 Red River Theatres in Concord, N.H. was the site of the most recent screening of 'When Lincoln Paid' (1913), a formerly lost film recently discovered in a barn in Nelson, N.H. and restored under the guidance of Larry Benaquist, professor of film studies at Keene (N.H.) State College. In staging the premiere of this Francis-Ford directed drama last April, Larry allowed me a chance to supply live music; this follow-up screening in Concord was another great opportunity to help bring the film to life, and it went fairly well.

Our screening on Tuesday, June 2 was in the "Stonyfield" Theatre (named for a local yogurt manufacturer), and was my first time playing in one of Red River's two main theaters, which have first-class facilities, including steeply sloping rows of comfortable reclining seats. (Previously, we've shown silents in the smaller "screening room," which sits about 60 folks in hard-backed chairs on one level and offers only DVD projection.) I wasn't sure how my speakers would work in this environment, which has a lot of fabric on the walls that tends to suck in sound and deaden it, but most people said it seemed fine. One thing that makes a short film such as this a musical challenge is that there's little chance to really warm up. It usually takes me about 15 minutes to sink into the "trance" where I feel at one with the movie, and so a short film such as 'When Lincoln Paid' doesn't usually benefit from me getting in the zone, so to speak. But being aware of that reality is half the work of overcoming it, I think. 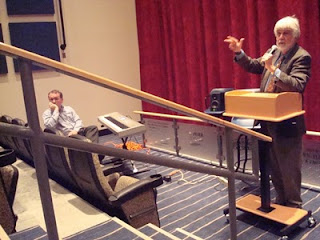 Though the film is only about a half-hour long, Larry's comments before, and a lively question-and-answer period afterwards, stretched the whole program out to about 90 minutes, I think. We filled slightly less than half the theater by my count, but the audience included several notables, including Van McLeod, the state's commissioner of cultural affairs, and Susan Leidy of the Currier Museum of Manchester, N.H. It wasn't the sell-out Red River was hoping for, perhaps, but enough to cover the expenses (at $10 a ticket) and for theater managers Connie Rosemont and Barry Steelman to mention that they'd like to explore showing more silent films, which would be great. Stay tuned on that one. 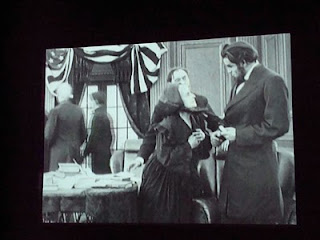 Larry and I next take our roadshow to Bradford, Vt. on Saturday, June 19 for a private screening of 'When Lincoln Paid' for a Civil War-themed weekend celebration. By the way, the pictures posted here from the June 2 screening were taken by Jemi Broussard, who helps out at Red River and is married to Rick Broussard, editor of New Hampshire Magazine and a former colleague of mine. Both are big supporters of showing silent films as they were intended, so thank you to them for all their efforts, which have included Jemi supplying authentic West Point tunes for a screening of the Bill Haines film 'West Point' (1927) in Wilton, N.H. last fall. 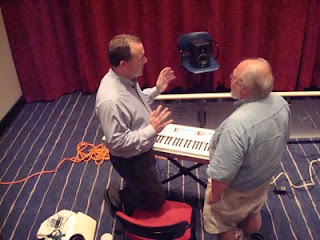 And this last photo was taken after the screening, when I was delighted to find former AP newsman Adolphe Bernotas in the audience. Adolphe, a fellow Lithuanian and music-lover, retired from the AP's Concord bureau a few years ago and reports he's enjoying the good life. Adolphe is a long-time opera buff known for wearing a full-fledged tuxedo to Opera New Hampshire performances at Manchester's Palace Theatre, and so we had a nice chat about the similarities of silent film and opera, which happen to be many, I think. They're both all about the big emotions such as lust, revenge, greed, and so on, and music plays an important role in telling the story.

Lots more to talk about on that subject... And to see more of Jemi's photos, check out the very active Red River Facebook page.
Posted by Jeff Rapsis at 8:15 PM