We had a good house for a program of Fatty Arbuckle material at the Wilton (N.H.) Town Hall Theatre on Sunday, July 25. We program comedy for the summer, which seems appropriate for the season, and also because it's when audiences tend to contract (I think due to the nice weather), so it's the time to bring out the big popular films to keep attendance from falling completely flat. 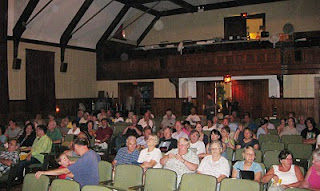 But Fatty still packs them in, as you can see from this shot I took just before the screening began. I think we had well over half the house filled, and maybe as much as 3/4. Nice turnout for a tribute to Roscoe's achievements.

We programmed the screening on the assumption that pretty much everyone would not have seen any Fatty Arbuckle comedies, so I was surprised when a show of hands prior to the program showed a healthy proportion had. Even so, it was a challenge to figure out how best to show Fatty's range to folks who may not have been familiar with him or silent film comedy in general.

So I chose to start out with the restored 'Love' 1919, which holds together very well in terms of sticking to a coherent plot line but still features heaping doses of Arbuckle's kind of comedy. And the print quality is superb, and that really makes a difference in modern audience appreciation of silent film, so it was a great way to introduce Arbuckle. It got a good reaction, too.

Next was 'The Bell Boy' (1917), one of the better Arbuckle/Keaton two-reelers in terms of gags and build-up, though the bank robbery sequence seems a bit random. But still, the horsecar that opens the film winds up causing a spectacular finish, so it has an eerie logic that transcends the random slapstick of so many of the Keystones. Also, the hotel/town milieu was a complete change of scene from the rural setting of 'Love,' which was a plus, as was the interesting World War I-era anti-German references. Good audience reaction on this one, too.

If we had time for a Keystone, I would have chosen either 'The Waiters Ball' (for more great knockabout slapstick) or 'Fatty and Mabel Adrift' to show Roscoe's growing abilities as an actor/filmmaker, but you can't overdo it with these kinds of programs: three films in two hours is plenty for the non-hardcore. In the end, I decided to screen 'Leap Year' (1921), the unreleased Arbuckle feature, as it showed still another side of his abilities and hinted at what Arbuckle might have perhaps done more of had he had the chance. And the fact that 'Leap Year' was suppressed due to the scandal made it of interest, too.

Audience reaction was somewhat muted, which wasn't a surprise, but I was pleased to hear things perking up when things get a little crazy in the last two reels. For the music, I used several themes—a syncopated ragtime-style main tune that tended to follow Arbuckle and his various moods, a bumptious but stern melody that grew out of the father's attitude at the start of the film and then came to be employed when anyone registered some kind of disapproval, and also a busy descending melody that lent itself to continuous repetition and surprising modulations, and so got spun out to underscore a lot of the farce situations. It was all played on a modified harpsichord setting to lend a slight air of upper crust to the proceedings, and I have to say I was pretty pleased with how it came together. 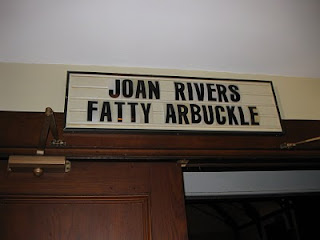 A final note: The current release playing on the same screen is 'Joan Rivers: A Piece of Work,' which caused the theater's door marquee to be graced with a pair of names that I haven't seen together before.
Posted by Jeff Rapsis at 8:36 AM