I'm pleased to announce screenings in not one but two wonderful new/old venues for silent films. New to me, but old in the sense of being wonderful historic places with extensive pedigrees: one a classic town hall auditorium in Vermont with great acoustics, the other a vintage and virtually unrenovated 1923 summer moviehouse in a Maine seaside resort. 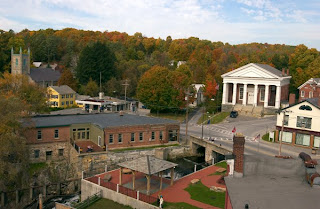 The Vermont locale is the Brandon Town Hall in Brandon, Vt., a picturesque small town about a half-hour north of Rutland, Vt. The place has a history: prior to the Civil War, Brandon was a center of the abolitionist movement and a key point on the Underground Railroad, which helped escaped slaves reach safety in Canada. It was also the birthplace of 19th century U.S. statesman Stephen Douglas, nicknamed the "Little Giant" due to his short stature, and who went on to debate Abraham Lincoln. All this prompts an annual celebration of the town's Civil War ties, which is why I found myself there in June to play music for a screening of the recently rediscovered 1913 Francis Ford film 'When Lincoln Paid.'

The hall was a winner, with great acoustics and a new digital rear-projection system set up to screen films for the public. And the audience was very responsive to the film, leading to several conversations about follow-up screenings. So, lo and behold, we'll be doing a short series of screenings there in August, September, and possibly October. (The building is unheated so it depends on the weather.) The programs are heavy on the big comedies, which are a good way to get new audiences used to the silent film experience, I think. We're showing Lloyd's 'Grandma's Boy' (1922) on Saturday, Aug. 14 and then Keaton's 'College' (1927) on Saturday, Sept. 18. For details, check out my schedule page. 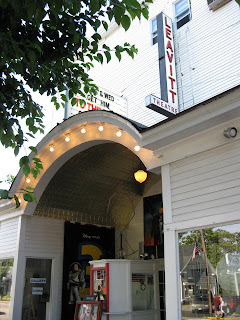 The Maine location is the amazing Leavitt Theater, which opened in 1923 as a single screen moviehouse right on Route 1 in Ogunquit and remains virtually unchanged. Entering this 636-seat theater is like stepping back in time: many of the seats are original, complete with wire loops underneath them for gentlemen to stow their fedoras! Owner Peter Clayton, who has been steward of the summer-only moviehouse since the 1970s, keeps the place going with a mix of first-run films; the one recent major concession to progress was removing the old carbon arc projectors (in use until just a few years ago; he said he had to get the rods from India!) and replacing them with a modern system. 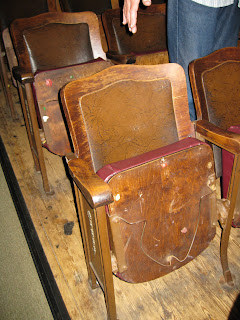 A place such as this cries out for a silent film screening, and Peter has graciously allowed us to try our luck with a few matinees during the latter half of the current summer season. Coincidentally, in August the Ogunquit Playhouse just up the road is presenting the first-ever-anywhere regional theater production of Andrew Lloyd Webber's "Sunset Boulevard" musical (with Stephanie Powers of 'Hart to Hart' in the Norma Desmond role), so you can't ask for a better environment in which show silent films as they were intended to be seen.

So we'll open on Sunday, Aug. 22 at 2 p.m. with Chaplin's 'The Kid' (1921) and maybe something with Gloria Swanson in it to tie in with "Sunset Boulevard." We'll do Keaton's 'College' (1927) in September and maybe one more in early October before the weather turns. (Like Brandon Town Hall, the Leavitt Theatre is unheated and un-air-conditioned. When the weather finally turns, Clayton closes up shop until the next spring.) For more details, please see the schedule page. And the Leavitt Theater is worth a lot more comments that I can get to right now, so stay tuned for more pictures and words.
Posted by Jeff Rapsis at 11:09 AM