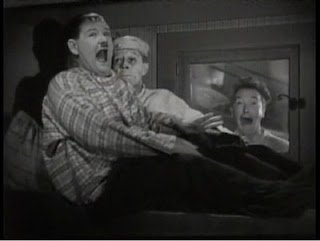 We just arranged for an afternoon of vintage film screenings (including some silents) at the Manchester (N.H.) Public Library, 405 Pine St., in beautiful downtown Manchester. My colleague Dave Stevenson is unlocking his vault of 16mm prints as part of a meeting of the local "tent" of the Sons of the Desert, the Laurel & Hardy Appreciation Society. (By the way, Manchester is hosting their international convention in 2012, which we're all excited about. More about that in months to come.)

The screenings on Saturday, Oct. 16, which have a Halloween flavor to them, are in the library's classic downstairs auditorium. They're free and open to the public and will run from 1:30 to 5 p.m. All films will be shown from 16mm prints.

The program will consist of memorable cartoons and comedy shorts featuring Laurel and Hardy, Buster Keaton, Betty Boop and two stars from this area: Walter Long, who was born in Milford, NH, and Thelma Todd who hailed from Lawrence, Massachusetts. The films will be shown in beautiful 16mm prints on a real projector. Both silent and sound movies will be shown. Silent titles will be screened with keyboard accompaniment by local composer Jeff Rapsis. A fun time is guaranteed for all.

THE LIVE GHOST (Roach-MGM; 12-8-1934); Dir. by Charley Rogers. Cast: Stan Laurel, Oliver Hardy, Walter Long, Charlie Hall, Arthur Housman and Mae Busch. A gruff sea captain is having trouble manning his ship because of rumors it's haunted. He inveigles Stanley and Oliver into helping him shanghai a crew from the sailors at a dockside bar. Once aboard, the captain warns them that whoever says the word "ghost" will get his head twisted from north to south. At sea, one of the drunken sailors falls into a trough of whitewash, terrorizing Stanley and Oliver into blurting out "ghost" in front of the enraged captain. 20 min.; Sound; B&W. 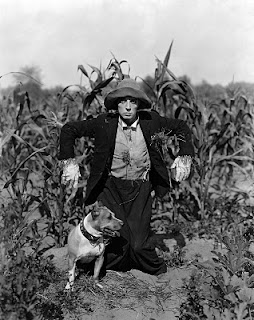 THE SCARECROW (Metro Pictures; 12-22-1920); Dir. by Eddie Cline and Buster Keaton. Cast: Buster Keaton, Joe Roberts, Sybil Seely, Al St. John, Joe Keaton and Luke the Dog. Farmhands Keaton and Roberts share a cottage full of mechanical devices for making life easy. They are rivals for the farmer's daughter. Keaton , disguised as a scarecrow, causes troubles for his rival and the farmer. When Keaton stoops to tie his shoe, the girl accepts what she thinks is his kneeling proposal. 20 min.; Silent with live accompaniment; B&W. 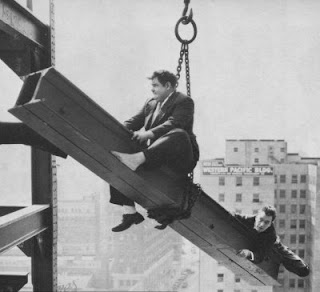 LIBERTY (Roach-MGM; 1-26-1929); Dir. by Leo McCarey and Stan Laurel. Cast: Stan Laurel, Oliver Hardy, James Finlayson, Sam Lufkin, Tom Kennedy and Harry Bernard. Two escaped convicts (Laurel & Hardy) change clothes in the getaway car, but wind up wearing each other's pants. The rest of the film involves their trying to exchange pants, in alleys, in cabs and finally high above the street on the girders of a construction site. 20 min.; Silent with live accompaniment; B&W.