I'm really looking forward to our upcoming screening of 'The Cat and the Canary' (1927) on Halloween, Sunday, Oct. 31, at the Wilton (N.H.) Town Hall Theatre. It's a terrific-looking film, one of the most watchable silents I've ever encountered, and I can't wait to see how it plays with an audience. 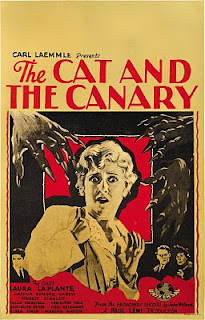 We do screenings in Wilton on the last Sunday of every month, and when I saw that this year, our show fell right on Halloween Day, I wanted to do something special. 'The Cat and the Canary' promises to fill the bill: a silent film creep show that served as the inspiration for decades of haunted house thrillers to come, with its lonely hallways, sliding panels, secret passageways, and more.

Also, I consider it both poor form and bad karma to talk too much about music in advance of a screening (because sometimes I change my mind in the process, even during the show) but in this case, I've worked up some good stuff that I hope will help 'The Cat and the Canary' be as effective as possible in a theater. Our shorts include a couple of Halloween-themed films, including one starring our pals Stan Laurel & Oliver Hardy. Hope to see you there!

For more info, here's the press release that just went out. It's a little late due to time constraints lately, but we're still hoping to scare up a big crowd on Halloween. There might even be candy! Trick or treat! WILTON, N.H.—'The Cat and the Canary' (1927), a haunted house thriller from Hollywood’s silent film era, will be screened with live music on Halloween, Sunday, Oct. 31 at 4:30 p.m. at the Wilton Town Hall Theatre in Wilton, N.H.

The Halloween screening is free and open to the public, with donations accepted to defray costs.

'The Cat and the Canary' stands as the original movie thriller—the first picture to take audiences to the reading of a will in a haunted mansion that features clutching hands, a masked killer, disappearing bodies, and secret passageways.

Silent film starlet Laura LaPlante leads the cast as a young heiress who must spend the night in the creepy old mansion filled with relatives who all have motives to frighten her out of her wits. Meanwhile, a dangerous escaped lunatic is loose on the grounds. Can she and the others make it through the night?

The Wilton screening will use a fully restored print that shows the film as audiences would have originally experienced it. 'The Cat and the Canary' will be accompanied by live music by New Hampshire composer Jeff Rapsis, who specializes in silent film scoring. Rapsis will improvise the score on the spot during the screening. 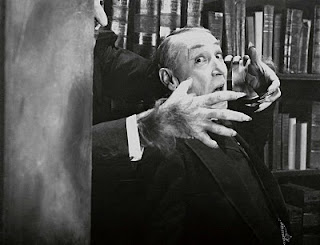 "Silent film is all about the audience experience, and this one should be a perfect Halloween crowd-pleaser," Rapsis said. "It has something for everyone—spooky scenes, some good comedy, and it's all fine for the whole family."

Critics praise the original 'Cat and the Canary' for its wild visual design and cutting edge cinematography. Film reviewer Michael Phillips singled out the film for using "a fluidly moving camera and elaborate, expressionist sets and lighting to achieve some of the most memorable shots in silent film, from the amazing tracking shots down the curtain-lined main hallway to the dramatic zooms and pans that accompany the film's shocks."

Leonard Maltin called the original 'Cat and the Canary' a "delightful silent classic, the forerunner of all "old dark house" mysteries.

The Wilton Town Hall Theatre's silent film series gives movie-goers the chance to experience silent films the way they were intended to be seen: in best quality prints on the big screen with live music, and with an audience. See for yourself the pictures that made audiences to first fall in love with the movies!

Admission to 'The Cat and the Canary' is free, with donations accepted to defray costs. For more info, visit www.wiltontownhalltheatre.com or call (603) 654-3456. For more info on the music, visit www.jeffrapsis.com
Posted by Jeff Rapsis at 10:45 AM