The vampire still packs 'em in! 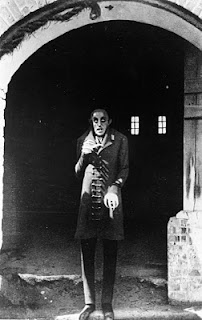 A slightly belated note about our recent double feature of 'Nosferatu' (1922) and 'The Golem' (1920), which took place this past Monday (four days ago) at the Palace Theatre in downtown Manchester, N.H.

First, I was delighted with the relatively heavy turnout for this program. Something like well over 100 people attended, easily the highest number for any Palace screening in the three years we've been showing silents there.

One reason, perhaps, is that word is getting around. Another is that we got lucky with some good publicity in the local media. But mostly, I think 'Nosferatu' itself carried the day. With sunsets coming earlier each evening and Halloween looming at month's end, people were in the mood for a vampire flick, so this caught them just right.

With two films, it was a long program: more than three hours, and we included a brief intermission between the two. 'Nosferatu' went fine, but I think I was too ambitious right from the start and so probably overdid things (special effects, weird sounds) a little too early. Probably should have waited until Hutter was at the castle to start up with the really weird stuff. But 'The Golem' was immensely satisfying. 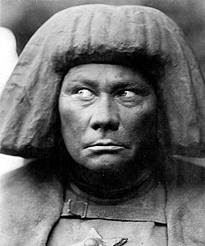 I'd only looked at the film once (and a lot of that was in FF mode) and so knew how it went generally, though I didn't have any complicated plan. However, the music had a spontaneity that seemed to bring out the best in this picture: not only its spooky parts, but also a lot of humor. Some of the humor might not have been intentional by the film's German makers, but it did help the film, er, come to life. (No pun intended.)

Also helping was a serendipitous "plodding" melody I came up with that evolved into a main theme for the picture. It's actually a small snatch of a larger melody from Bach's "Little Fugue" in G minor, but it came into its own here as a perfect musical representation of steps being taken, either to build the leading man of clay or bring to life or to accompany him marching around the ghetto. Nice! 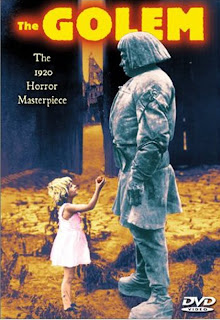 I also had another melody that I put in a mode with a flatted second so it would sound vaguely Jewish. However, any interest in creating a characteristic sound world for this film was diminished by the filmmaker's depiction of Jews as occultists led by Rabbis who wear pointy sorcerers hats and communicate with the underworld. Sheesh! Still, a remarkable film, and one that (with hindsight) contains many seeds, I think, of the anti-semitism that was to bloom so ferociously in Germany in not too many years hence.

The crowd had MANY new faces, and reaction was palpable when we previewed upcoming films in the series: 'Birth of a Nation' (1915) on Monday, Jan. 17, 2011 (yes, that's Martin Luther King Day) and 'Metropolis' (1927), among others. One thing that helped was a marvelous "coming attractions" slide show created by Dave Stevenson that gave attendees a glimpse of scenes from films to come, and which we ran prior to Monday night's frightfest. Let's hope we keep the crowds coming and that the Palace remains open to showing films there in a way that celebrates early cinema on, well, a palatial scale.
Posted by Jeff Rapsis at 7:13 AM